SEX/NUDITY 4 - We see many statues of nude men and women revealing bare breasts and chests, buttocks and abdomens in several scenes. A man flashes his bare buttocks at passing people. Men and women kiss and caress each other. A man and a woman kiss and hug each other. A man caresses a woman's throat and cheek. A man holds a woman, caresses her hip, abdomen and thigh and she swoons. A woman caresses a man's face, and he leans into her hand (please see the Violence/Gore category for more details). A man and a woman express their love for each other and kiss. A man and a woman hold each other. A woman playing a part as a pageboy caresses another woman's side and it is implied that the characters kiss while hiding behind a fan. Men and woman dance together, one man lifts a woman's skirt and climbs under it (it is not certain what, if anything, happens). Men admire younger women dancing and make suggestive remarks. Women admire men in a few scenes. Men in theatrical costumes are bare-chested and women expose bare abdomens and cleavage when they wear short tops. Women's theatrical costumes are flesh toned and have patterns that outline their cleavage and nipples. A woman's stocking top, garter belt and bare thigh are seen when her skirt hangs open. A woman's skirt is sheer and when it is backlit the outline of her legs is evident. Women wear low-cut, off-the-shoulders dresses that reveal cleavage and bare shoulders.

VIOLENCE/GORE 5 - A man is chased through the catwalks above a theater stage, he jumps and swings from ropes, a rope is wrapped around his neck, the man is pushed over the side, he falls and jerks (we see his feet jerk and hear people screaming). A rope is wrapped around a man's throat, it is pulled, and the man falls to the floor dead. A theater begins to burn, people run in panic, a man lies dead on the floor and a woman grieves over his body. A man falls through a hole in the floor and into water, he is pushed under water by a grate and he struggles to lift it before he drowns. A man wraps a rope around a man's throat, lashes him to a gate and threatens to kill him. We see a boy with a bag over his head in a cage, as an attraction of "freaks" in a traveling show (he is called "the devil's child"): a man kicks and whips the boy with a stick, and the boy's bag is lifted for paying customers to look at his gruesome features. A man's mask is removed to reveal a badly scarred and malformed face; he cuts a rope that holds a large chandelier, the fixture swings back and forth -- over an audience that screams and rushes to get out of the way -- and it crashes to the floor. Two men fight with swords, they thrash and slash at each other (one is slashed on the arm spilling a bit of blood), one falls to the ground, and the other holds his sword above him. A man pushes a sword against a man's stomach and threatens others. A man falls through a hole in the floor, and another man follows, holding a sword. A man on a horse chases a woman in a carriage. A woman caresses a man's face, he leans into her hand, and the woman pulls a mask off the man's face revealing a badly scarred and malformed features; the man becomes very angry, throws the woman to the floor and yells at her (she cowers). A woman fears that she will be taken away by a man and that he will kill her. Someone locks a woman in a room, the candles blow out and the woman hears a man singing; she appears to walk through a mirror, walks hand-in-hand with a man through darkened passageways that lead to a boat in water, and they sail through other passageways until they find a cavern. A heavy theater curtain is untied and it falls to the stage knocking people down. A woman slaps a man's face. In a rage, a man breaks many mirrors. A woman sprays something into her throat that makes her croak while she is trying to sing. The relationship is not clear, but a man appears to be holding a woman captive, although she does not protest initially. A painting shows a woman holding a platter with a severed head on it (blood is painted around the neck). A woman sees a mannequin painted and dressed to look like her, she faints, and a man catches her and carries her to a bed. A woman talks of the time when her father lay dying (we see him in bed and she, as a young girl, sits next to him). A man talks about "strange occurrences" in a theater and refers to ghosts. Booming, ominous organ music blares with the introductory credits. We visit a decrepit theater whose contents are being auctioned. A man drags a woman by the hand through passageways and is angry. A woman yells at a man. People argue and yell at each other in several scenes. A woman screams when she sees rats scampering through darkened passageways. A man and a woman are watched by another man who's standing in the shadows. 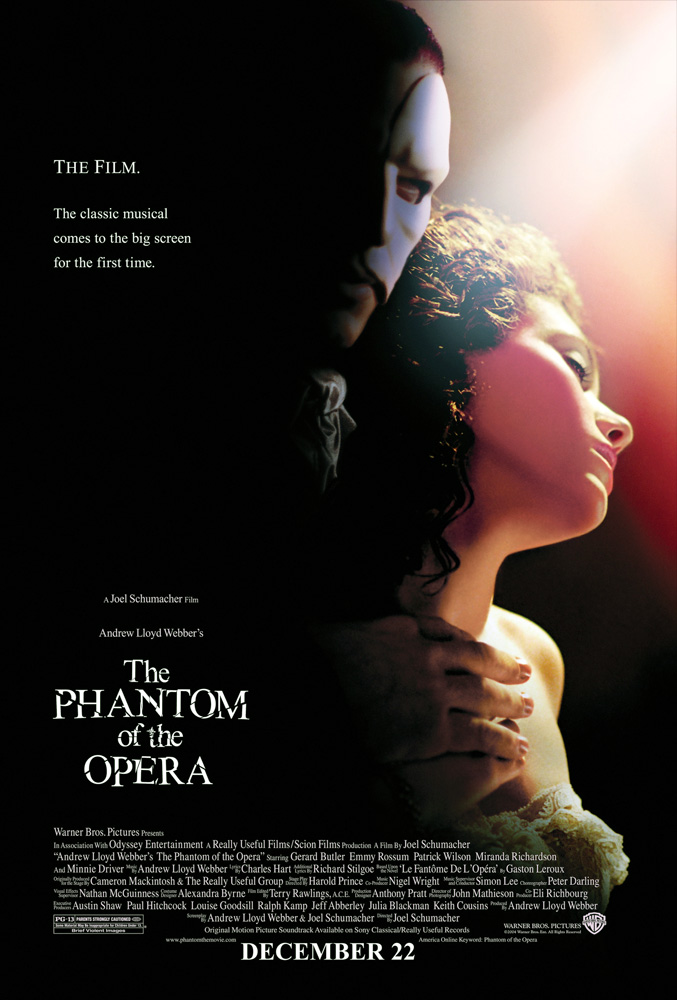