A woman (Sanaa Lathan) wanting marriage and a family ends a relationship with a man (Morris Chestnut) who is not ready to commit to her. When she meets another, seemingly perfect guy (Michael Ealy), she quickly learns that perfection may be only skin-deep. Also with L. Scott Caldwell, Charles S. Dutton, John Getz, Tess Harper, Kathryn Morris and Rutina Wesley. Directed by David M. Rosenthal. [1:40]

SEX/NUDITY 6 - A man and a woman in a dance club go to the restroom and have sex: the man removes his shirt (we see his bare chest and shoulders) and the woman is seen wearing a bra that reveals cleavage as the man puts her up onto the sink and thrusts (we hear moaning and rhythmic thrusting). A woman undresses to shower (we see cleavage) and a man joins her in the shower, kissing her neck and back (sex is implied). A woman wearing a sheer shirt (her breasts and nipples are visible through the fabric) leans over a man seated on a bed and they kiss; the scene changes to them having sex and he thrusts as they moan (please see the Violence/Gore category for more details). A bare-chested man (we see his bare chest and abdomen) and a woman wearing a shirt lie in bed talking; they kiss and he kisses down her chest (sex is implied). We see a video of a man and a woman having sex (we see thrusting and hear moaning) and it is understood that this video has been sent to many people.
► A woman showers and dresses and we see her thong panties, cleavage and upper chest while wearing a bra. A bare-chested man sleeps in bed. A woman wears a full slip that reveals bare shoulders and cleavage. A woman wears a low-cut dress that reveals cleavage in several scenes. A man wears a tank top T-shirt that reveals bare shoulders and upper chest. Women in a club scene are shown wearing mini skirts and low-cut tops and dresses that reveal legs to the upper thigh, cleavage and bare backs. A woman wears low-cut tops, dresses negligees that reveal cleavage and some bare shoulders in several scenes throughout the movie. A bare-chested man does push-ups on the floor (we see his bare chest and back). A man is shown with a towel wrapped around his waist (we see his bare back, chest and abdomen).
► A man and a woman kiss goodnight and the woman moans. A man and a woman kiss goodnight. A man and a woman hug and kiss at a party. A woman kisses a man sleeping on bed and he invites her to join him (she does not). A man takes a woman's hand across a table in a restaurant. A man holds a woman's hand under a table at a restaurant. A husband hugs his wife and kisses her cheek. A man and a woman hug and kiss. A man and a woman kiss in a moving car and the man tells the woman, "I love you." A man presses his lips against a lipstick mark on a wine glass. A man cuddles and smells a bed pillow in a woman's home and sucks on her toothbrush. A man holds a woman as she cries.
► Men and women in a club dance with suggestive hip movements; one couple moves very close together and the man kisses the woman's neck, and then her bare chest and they kiss.
► A man at a bar approaches a woman and asks to buy her a drink; when she says "no" he asks her to leave with him (please see the Violence/Gore category for more details). A man and a woman exchange glances and smiles in a coffee shop. A man tells another man, "She's probably thinking about the sex right now" (please see the Violence/Gore category for more details). A man says to another man, "It must have killed you to see her with him; kissing her, touching her, having her."
► A woman is upset when her mother takes the woman's boyfriend to sleep in a separate room while visiting; she sneaks to his room, climbs in bed with him and kisses him until he tells her to leave and she does.

VIOLENCE/GORE 6 - A man in a woman's home is confronted by a neighbor, who leaves and runs across the street to get into her own home; the man chases her and pounds on the door, grabs her with his hand over her mouth and shoves her down a flight of stairs (we hear a crunch and see her dead at the bottom with blood on her face and her neck twisted unnaturally). A man breaks into a woman's home and reaches for the shower door thinking that she is inside; a woman behind him cocks a shotgun and points it at him, he attacks her and slams her against a wall a couple of times, she kicks him and he throws her down a flight of stairs, then grabs her by the throat and she bites his hand, he pins her on the floor and she gouges his eyes, she finds a knife and slashes his arm, hits him in the head with a cooking pot (we see blood on his head and on her head), and then shoots him twice knocking him down before shooting him a third time and killing him (he falls back on a glass table and has a large bloody bullet wound on his chest). A man at a gas station admires a car and another man pulls him away, throws him on the ground and punches him repeatedly, and then kicks him (we see the victim with blood on his face) until another man shoots a gun in the air and the attacker speeds away in the car. A man pounds on a table in a restaurant when he becomes angry and grabs a woman as she walks away; she pulls free and leaves. A man pounds on a woman's car window and yells for her to open the window; she speeds away. A man grabs another man by the throat and threatens him when the other man makes a remark about a woman. A police detective slams a man's head against a wall and shoves him to the floor (we see blood on the man's had).
► A man drives along winding roads at night and one of the tires loosens and comes off, sending the car out of control and over an embankment; we see the car flip several times and the driver is shown partially outside the car and covered with blood as another man approaches and covers the wounded man's nose and mouth with his hand until he stops moving.
► A man and a woman have sex (please see the Sex/Nudity category for more details) while another man lies under the bed. A man and a woman kiss in a shower stall as another man watches from outside the stall (they do not appear aware of his presence). A man breaks into a woman's house several times, planting cameras and installing something on her computer; he steals the woman's cat and hides in a closet when she came back unexpectedly. A woman breaks into a man's place and breaks his computers and equipment, then spray-paints something on the wall. A man stands outside a woman's house and she gets into her car and speeds away as he calls out to her. A woman walks through a dark parking lot, stops when she hears a noise, and then finds a note on her car window that reads, "If I can't have you no one will." A man at a bar approaches a woman and asks her to leave with him; another man approaches and pretends to be her date, telling the other man to leave. A man calls a woman on the phone repeatedly. A sex video is distributed to a woman's employers and clients and she is suspended from her job. A body covered by a body bag is taken out of a house on a stretcher.
► A man yells at another man and tells him to leave an office meeting. A woman confronts a man at a restaurant with another woman and says that he killed someone; the other woman looks frightened and leaves. A police detective threatens a man in an interrogation room. A police detective tells a woman that a man died in a car accident and she cries. A man tells a woman a story about a man who had a gun in his home and used bean bag rounds as warning shots and live rounds to kill a man who broke into his house.

MESSAGE - If something seems too good to be true, it probably is. 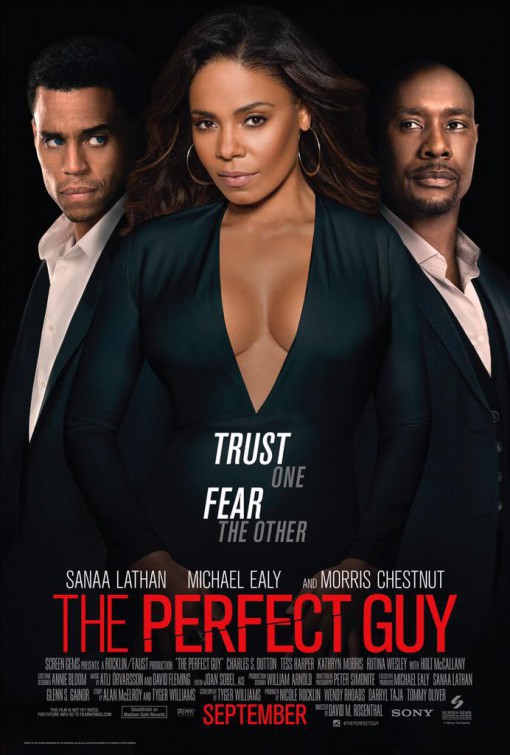