Hoping for a miracle, a childless couple (Joel Edgerton and Jennifer Garner) bury a box in their garden that holds their notes on the perfectly imagined offspring. Soon, a child (Cameron "CJ" Adams) appears and while he is quite odd he changes their community. Also with David Morris, Rosemary DeWitt, Odeya Rush, Shohreh Aghdashloo, Common and Dianne Wiest. Directed by Peter Hedges. [1:45]

SEX/NUDITY 2 - A husband kisses his wife as they enter their bedroom from a hallway and slam the door (sex is implied). A man and a woman kiss briefly several times and a boy hugs a girl.
► A boy and a slightly older girl almost kiss once, but do not do so. A husband and his wife lie in bed, fully clothed (he wears a T-shirt and sweat pants and she wears a long, opaque nightgown).
► A husband and his wife hear from a doctor that they cannot have children and the wife cries. A boy asks other young people what his mom told them about children: "So you all came from your mom's tummy? How was that?" and no one answers. A 10-year-old boy tells his parents about a girl that he "more than likes her." A woman says that her 10-year-old son is too young to like girls at all, but we see that he has male and female friends and that he likes a girl who is slightly older than him is. On the sideline of a kids' soccer game, a girl holds up a large sign: "I'm with 0!" suggesting that she is the girlfriend of the player number 0.
► A 10-year-old boy sits naked and covered with mud beside a cardboard box (we see his upper chest, shoulders and arm from behind the box). A 10-year-old boy wears a bath towel from his waist to his feet, revealing his bare back. A 10-year-old boy wears swim trunks and socks as he dives into a pool, exposing his bare chest, back and legs. At a swim party, middle school boys and girls wear swim trunks that expose boys' bare chests or swimsuits that reveal girls' backs, shoulders, arms and legs (little cleavage) and a few younger girls wear two-piece suits that also expose midriffs.

VIOLENCE/GORE 3 - A physician tells a husband and his wife that they cannot conceive and they become very sad; the wife cries and they have a very loud argument with shouting, name-calling and slamming doors until a boy living with them tells them to stop fighting and the man and the woman cry.
► Two older boys bully a young boy at school by smearing lunchroom food all over his hair and face. Two boys' father yells at them and smacks one in the head for not doing well enough in soccer.
► Three labor union meetings feature arguments and shouting: Between meetings, bosses and workers argue about layoffs and a plant closing; one scene includes very loud yelling and shaking fists among dissatisfied workers; two men threaten bodily harm to a supervisor that stole a new product idea from a worker until a company owner intervenes.
► A husband and his wife participate in an adoption interview and argue with agency officials several times. A husband and his wife practice cheering loudly at an imagined soccer game of their future child and the shouts are startling. Police officers drive up to a house with their siren shrieking, exit the car and tell the homeowner to turn in his sprinkler, because there is a no-watering period; the homeowner argues with them briefly before they leave. A woman museum curator is extremely rude to her employees and fires one after a brief argument. A man and his father have several brief arguments. A woman confronts a girl and argues briefly with her about an art project her son is doing with the girl. A soccer coach yells at his young team members to hurt a player on the opposite side, by saying, "Take his knees out! Put him on the ground!" (nobody tries to do this). Two adult sisters continually argue about whose kids are better at sports, music and school.
► A boy sits on the edge of a hospital bed where a dying man lies and we see the man has tubes running into his nose and arms; the boy makes him laugh, the man has a violent coughing fit in a silent scene and the camera cuts to a view of the man wearing a suit and smiling as he lies in his coffin. A boy informs his parents that he will move on; the parents cry and hug the child and he disappears. A boy talks to a girl in a silent scene and she cries. A husband and his wife run out into a heavy thunderstorm, dig up a box that they had buried and find a letter inside.
► Something moves under a blanket thrown on a bed and scares a husband and his wife; they chase the blanket-covered unknown and a grimy 10-year-old boy appears in an empty bedroom after a loud thunder and lightning rainstorm, a heavy mist and water puddles rise quickly off the roof of the house into the sky and it is implied that the boy grew from a box of wishes buried in the garden.
► Several soccer scenes feature loud shouts from crowds and some arguments between parents and a coach: In one scene, a boy falls with an injured leg and the coaches carry him from the field (we see no injury); another scene depicts an angry crowd of parents shouting and booing as a boy kicks the ball in the wrong direction; an additional scene shows a boy falling over a ball every time he attempts to kick it, but he does not suffer injury. In a dodge ball game, a large man in the center of the circle throws a dodge ball very hard at all the kids in the circle, knocking them down one by one; parents shout at him, he says the kids are not hurt and we see no injuries, but one boy is struck extremely hard in the head and he goes down hard (we see no blood or marks).
► Green leaves grow out of a boy's ankles and when a woman pulls on a leaf, the boy shouts, "Ouch!"; when the leaves are cut, they break the gardening shears, and one by one, they turn to autumn colors and eventually fall off.
► A mother tells her son to hide the leaves on his ankles from everyone and a girl hides a large birthmark on her right shoulder; in a swimming pool, the girl sees the boy's leaves and the boy kicks her in the head (she is not injured) and later, she chases him through the woods and he looks scared, but she catches up to him and shows him her birthmark.
► A close-up of an older woman shows many chin whiskers and she fires an employee for mentioning them. A man says that his father had a wart burned off him when he was a child.

SUBSTANCE USE - A husband and his wife pour large glasses of wine and drink them (they giggle a bit), a man seems happy at a birthday party and a woman asks the man's wife if "he has he been drinking?" (the wife replies no).

MESSAGE - Wishes can come true, especially when people accept themselves. 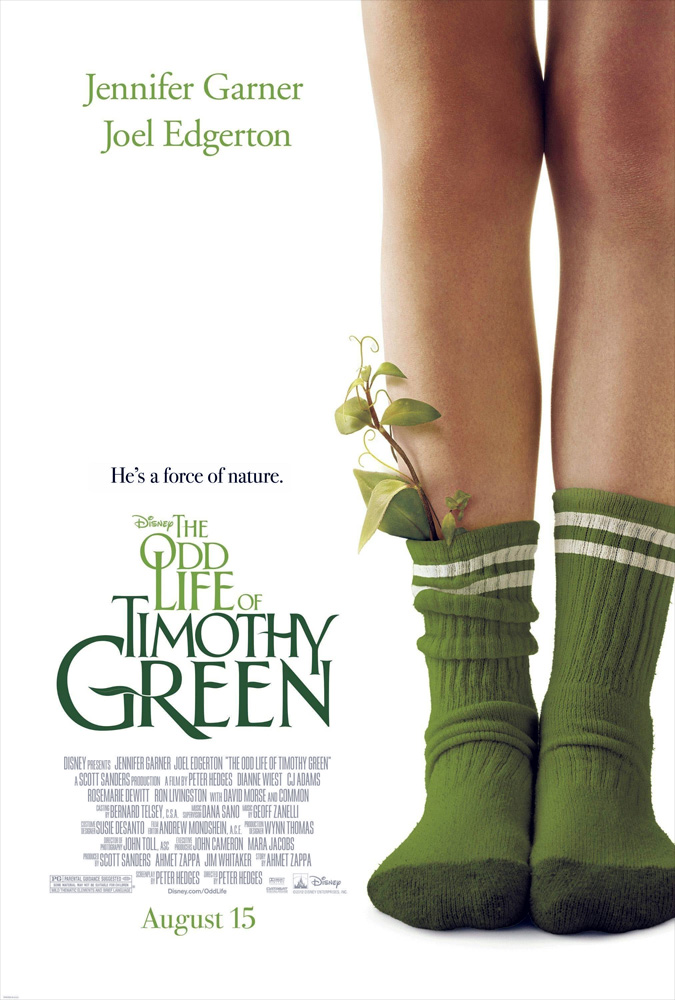