In the third installment of the series George Clooney reprises his role as Danny Ocean, and this time he masterminds an elaborate plan to bring down a hotel-casino run by a heartless mogul (Al Pacino) who double-crossed his mentor (Elliott Gould). Matt Damon and Brad Pitt co-star and fake earthquakes, rigged gambling and fireworks round out the plot. Also with Casey Affleck, Ellen Barkin, Scott Caan, Don Cheadle, Carl Reiner, Andy Garcia, Eddie Jemison, Bernie Mac, and Shaobo Qin. Directed by Steven Soderbergh. [2:02]

SEX/NUDITY 5 - A man wears pheromones in order to seduce a woman: he breathes on the back of the woman's neck, she embraces him and they nearly kiss, she rubs against him and tries to remove his shirt, he suggests that an earthquake tremor they feel is actually a sexual experience, and she kisses and caresses his head, neck and shoulders and pulls at his clothing; the straps of her dress fall off her shoulders, she grabs his hand and puts it on her clothed breasts but he resists, she pulls down his trousers (we see his shorts from the side), and she kneels in front of him and puts her face to his abdomen, and the scene ends.
► Two women wearing clingy blouses that reveal cleavage and a partially bare abdomens walk down a street, they enter a man's trailer, and the women pass the man's clothing out of the trailer to another man (sex is implied).
► A woman wears form-fitting, low-cut dresses throughout the movie that show cleavage, and one dress features a slit up the back from the knee, revealing her legs to mid-thigh as she walks. Several Sumo wrestlers are shown from a distance while in a ring wearing the traditional waistband and thong (one is shown in a closer view that includes his bare buttocks and when he bends forward, his thighs and covered genitals are visible). We see a nude statue of indeterminate gender from the rear, and we see its bare buttocks.
► A woman pinches another woman's bare arms below her bare shoulders, telling her that she is gaining weight and she's fired. A group of women wearing outfits that reveal bare shoulders and cleavage are interviewed for casino jobs by a man and he tells them to raise their skirts 3 inches (we do not see the women below the waist). Some women wear moderately low-cut gowns that expose cleavage.
► A man makes a remark about women being a distraction to him when he is working. Two men discuss relationships and one speaks of his ex-wife saying, "put the towel back on." A man makes a remark in an Asian language and another man translates the remark as crude and sexual.
► A man wiggles his torso and arms when describing a woman. A man walks past another man and pats him on the buttocks.

VIOLENCE/GORE 5 - A man pulls another man roughly off a chair, smacks his face onto the table, and two other men pick him up and smash his head into the end of a bank of slot machines. A man is pushed onto a game table, he's handcuffed, and he's jostled away by two men and a woman.
► A man and a woman are surprised in a hotel room by a security guard pointing a gun at them: the man is handcuffed and led to a rooftop where another man points a gun at him and steals diamond necklaces from him.
► Two men argue about their partnership, and two other men approach one of the men and back onto the upper ledge of a building under construction; the second man says he does not want to push the first one off the roof.
► During an earthquake a man realizes he is locked into a room, he rattles the doors, paces anxiously, and manages to get out but trips during another tremor; people also run and yell, and fixtures, fittings and statuary fall and break, barely missing people.
► A man climbs inside an elevator shaft with fast moving elevator cars whizzing by him, and narrowly missing him. A man strikes another man accidentally with a large suitcase (there is no injury). A man plummets by a cable (he's OK).
► Two men break into a hotel room with masks, gloves, and chemicals, they sprinkle chemicals over the furnishings, pull back the bed covers and distribute chemicals on the sheets, and one man puts chemicals into a glass of water creating fumes that spread to the room next door -- the resident of the room is violently sickened by the fumes.
► We see a riot break out with workers in Mexico behind a fence yelling and we see police in full riot gear carrying batons and bulletproof shields; a Molotov cocktail is thrown and police hose down the workers who are now carrying wooden clubs.
► A man says to another man, "Do you have all your affairs in order?" suggesting that he is going to be killed. Two men argue and one says, "I know people who know how to hurt." A man threatens three men by stating that they will be dead if they go against him. Two men argue briefly. There is a confrontation between two men, and one declares, "I move fast and when I move, I slice," indicating mayhem. A man says, "I don't want the labor pains: I just want the baby!"
► Three men discuss simulating an earthquake to frighten people, two men discuss performing burglaries, two men discuss stealing diamonds, a group of men discusses murder and hiding a body, and two men discuss building a trap door. A man says, "Danger is my middle name. A man says into a telephone: "Blast him!" A man yells at another man, "You about killed him!" A group of men work in a dark underground area, installing machinery and two of them discuss dying or going to jail.
► There is an explosion in a hotel-casino.
► A man eats a tainted or poisoned meal, he rushes to a bathroom and we hear sounds of vomiting from behind a closed door.
► A man checks hotel bed sheets with an ultraviolet light, finds indications of bodily fluids and gasps in disgusted horror. A man in a bathrobe wakes up in a chair and scratches his legs, and his face and neck are covered in a rash; two men yell at him and throw him out of his room because of his body odor and poor hygiene. A hospital scene shows a man in bed -- he's unconscious with an oxygen tube in his nose.

SUBSTANCE USE - A large group of men drink sake in a casino, a man pours a drink, a man at a bar has a tall drink in front of him but he does not touch it, there are drinks on tables around the bar, but no one is seen drinking, other people are seen holding drinks but not drinking them, and the hand of a man in a tuxedo is seen as it opens a liquor bottle and the scene ends. Two men smoke cigars and cigarette lighters are shown several times. A woman enters the hotel room of a man who wears pheromones that make her swoon. Medicine bottles sit on a nightstand in a sick man's room.

MESSAGE - Revenge can be fun and help the less fortunate as well. 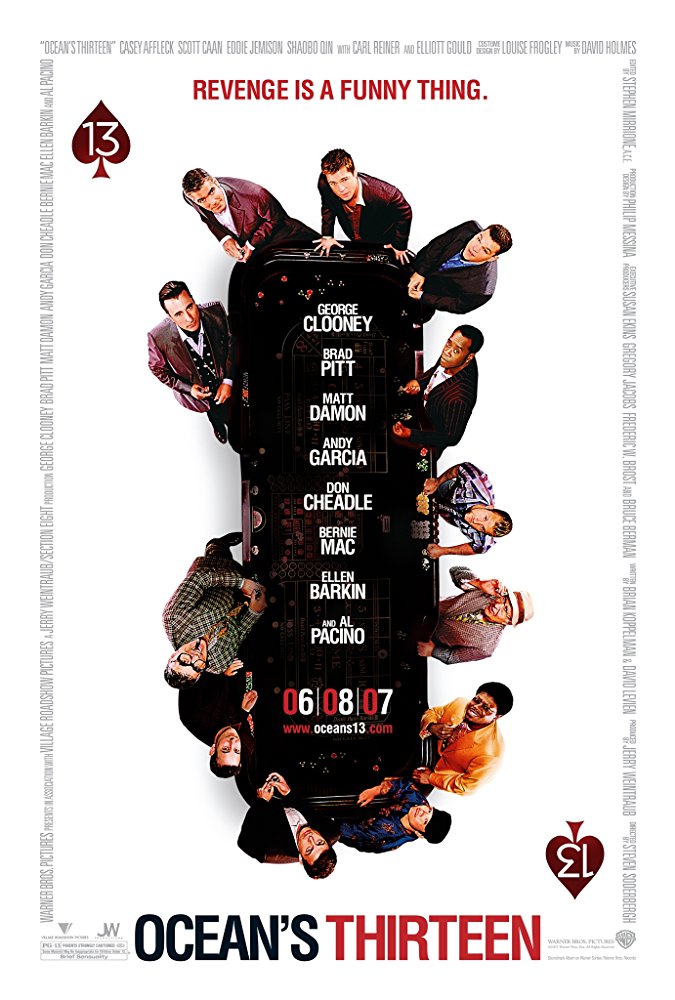