Ben Stiller stars as a man who is constantly letting the people he loves down because he is convinced that he can do better professionally. Even his young son is so disappointed in him that he won't ask him to come to his school for career day. This motivates him to settle down in one job and he becomes the night guard at a museum, where the residents come to life after dark. He now has to figure out how to survive the nights without being eaten by a T-Rex, or torn limb from limb by Attila and his Huns, or bombarded by a Lilliputian Roman army. Also with Carla Gugino, Kim Raver, Ricky Gervais, Robin Williams, Mickey Rooney and Dick Van Dyke. Directed by Shawn Levy. [1:48]

SEX/NUDITY 1 - A man using binoculars watches a woman and confesses his romantic feelings for her to another man.
► A woman wears low-cut sweaters that reveal cleavage in several scenes. A man's bare abdomen is visible.

VIOLENCE/GORE 4 - Three men attack a man, one throws him, one punches him, one kicks him in the face, and one kicks him and does a pile driver on his back knocking him to the floor.
► A horse drawn carriage runs out of control, going toward a woman, and a man pushes her out of the way, she is knocked to the ground, and turns back and sees that the man has been run over and cut in half (we see his two pieces severed at the waist); the man is still talking and explains that he is fine because he is made of wax and the woman drips hot candle wax on him in order to put him back together.
► A T-Rex skeleton in a museum drinks water from a fountain, a man sees it and runs, the T-Rex roars and chases him, snapping, the man hides under a desk, and the T-Rex picks up the desk in his teeth and throws it.
► A Civil War re-enactment shows explosions, and soldiers fighting with bayonets (we don't see any injuries but do see soldiers falling to the ground).
► A man walks past two large statues with human bodies and jackal heads; they become animated and stab at him with their spears (they miss), the man opens a sarcophagus, a mummy thrashes and struggles to get out, and it unwraps itself to show a young man.
► A dinosaur runs past a man and inadvertently knocks him down with his tail (the man flips and lands on stairs). A man is hit hard in the face by a hockey puck.
► A T-Rex skeleton chases a horse-drawn carriage, a remote control car slips and explodes after running over a snow drift (we are led to believe that the two men inside the car have died), and a man is thrown off the carriage and into snow when the horses stop short.
► A man is shot at with tiny darts and arrows by Native Americans, and his face becomes numb. A man is held at bayonet point and another man is held at sword point. Roman soldiers with catapults and arrows take aim at a man, and they fire on him (they are tiny so the arrows bounce off of him).
► A museum is in chaos in a couple of scenes, with Attila the Hun and his men grabbing a man and pulling on his limbs, African animals stampeding through the hallways, and Roman soldiers and cowboys fighting.
► A Neanderthal man uses a lighter and sets a fire, a man panics and sprays the fire and the man with a fire extinguisher, and the Neanderthal throws the foam at the man. A Neanderthal man jumps out a window and walks along a street.
► A man becomes stuck in elevator doors when they close, the elevator begins to move, and the man's head runs into the floor but he pulls his head free. A man is sprayed by a whale and knocked through the air.
► A monkey slaps a man in the face, the man slaps the monkey back, and they go back and forth repeatedly. A monkey throws keys at a man striking him in the face, and a monkey slaps a man in the face and sticks his tongue out at him. A monkey bites a man on the nose, and then urinates on him. A man is hissed at by a snake, and growled at by a lion.
► A man is scared by Neanderthal men approaching him and Attila the Hun and several of his men chase him, yelling what we assume are threats.
► A man is tied around the feet, he falls back and is tied to the ground across a train track, the train (it's a model train) speeds toward him, runs into his face and falls off the tracks (the man is uninjured).
► A man dresses in a tribal costume and mask and startles another man. A man threatens another man in several scenes and says, "I oughta' punch you in the nose." A man falls asleep in a chair, and he falls out of the chair and onto the floor.
► Many wild animals walk out of a museum and into city streets.
► We are told that Attila the Hun would pull the limbs off his victims (we see a drawing depicting this).

MESSAGE - The more you know about the past the better prepared you will be for the future. 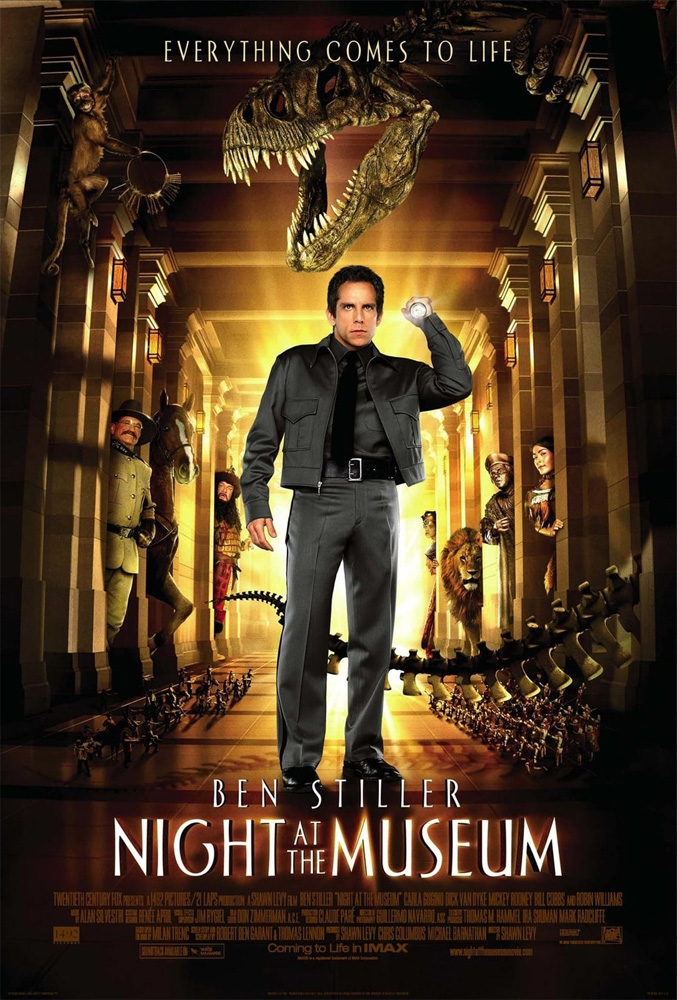