Nicolas Cage stars as a man who has grown up with stories of a mysterious treasure, unparalleled in value, and amassed through the ages. He has been pursuing the treasure all of his adult life, to the chagrin of his father, and eventually realizes that the final clues have been inscribed on the back of the Declaration of Independence, and his ex-partner plans to steal the document in order to get the treasure for himself. Also with Diane Kruger, Harvey Keitel, Justin Bartha and Sean Bean. Directed by Jon Turteltaub. [1:40]

SEX/NUDITY 2 - A man and a woman kiss, and a man and a woman hold hands and kiss. A man admires a woman's buttocks. A man and a woman undress in fitting rooms (we see the woman's bare shoulders). A man tells his father that he is in trouble, and the father asks the man if he made his girlfriend pregnant. Women wear low-cut evening gowns that reveal cleavage, bare backs and shoulders.

VIOLENCE/GORE 4 - People walk along old, wooden stairs, the ground shakes, dust falls, the stairs break, and one man falls a great distance (presumably to his death), while others struggle to regain their balance. A man dangles from a platform, he holds a woman by the hand, he lets her go, and she drops onto another platform. Three people are chased and shot at, one is shot at repeatedly, and he hits one of the gunmen knocking him out; the other two are nearly hit by a car, a man is shot at while climbing scaffolding, and a woman is knocked down by a bicyclist and is nearly hit by a truck. Men grab a woman on a street and push her into a van while shooting at two men in another van: the vans races through city streets, the woman dangles from the open door of one van and is pulled into the other one, after having almost been hit by a bus. A man is shot at several times but is not hit. A man in a ship lights a flare and he throws it toward another man who tries to catch it, but his arm is set ablaze; the flare then falls to the floor, which is covered with gunpowder, the men run and the ship explodes (the two men are left for dead). Men pull a coffin out of a crypt, the bottom falls out and a decayed corpse falls to the floor. A man is shot in the chest with taser guns and he collapses to the floor. Several men are surrounded by law enforcement officials with guns, and a man is threatened by another man with a gun. A man relates a story and we see several parts of the tale being re-enacted: One scene shows men fighting with swords, one scene shows men fighting during the Revolutionary War and we see cannon fire and men falling to the ground, one shows Crusader knights unearthing hidden rooms, and another scene shows a man riding in a carriage on a dark, rainy night and he appears to be ill and anxious. Men go into the hull of a ship frozen in ice in the Arctic Circle, one man finds a decayed body in a hammock, he panics and falls to the floor, and another man finds another body, and when he lifts the hand we hear cracking. A man swings a sledgehammer and nearly hits another man. A woman tries to run, a man grabs her and they struggle. A man pokes his finger with a knife, he bleeds and smears the blood on the shaft of a pipe in order to read an inscription. People walk through darkened passageways on the other side of a tomb. A man jumps off a ship and into a harbor. A boy walks into a darkened attic room, the floor creaks, he climbs a ladder and when he comes down, he is startled by a man behind him (it's his grandfather). A man is bound with duct tape. A man and a woman argue. A man talks about people having been beheaded and having their "entrails cut out and burned." A large fan is jammed and explodes. A man threatens to destroy the Declaration of Independence.

LANGUAGE 1 - Although probably unintentional a man removes his glove by pulling up on the middle finger, 1 mild obscenity, 4 religious exclamations.

SUBSTANCE USE - People hold drinks and a man drinks, and we see a wine bottle in a kitchen.

MESSAGE - When something is wrong, those who have the power to do something about it should. The ends sometimes do justify the means. 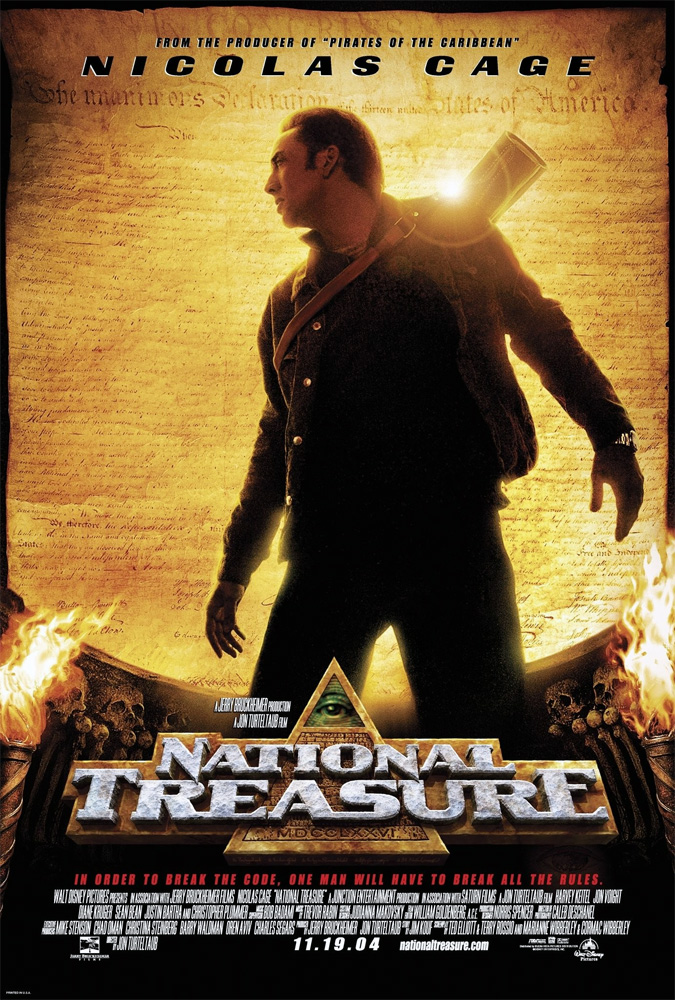