A young man, with the unlikely moniker Napoleon Dynamite, lives in Idaho with his grandmother and older brother. One day his uncle comes to live with them when his grandmother is injured in an accident, and the rest of the film revolves around these three eccentric people trying to figure out how to get through their lives and find some kind of contentment. With Jon Heder, Efren Ramirez, Aaron Ruell, Tina Majorino and Diedrich Bader. Directed by Jared Hess. [1:26]

SEX/NUDITY 3 - A woman gets off a bus, looks at a man waiting for her, she runs to him and they kiss (we hear smacks). A woman takes off a man's glasses, looks at him suggestively and they play footsie under the table. A woman kisses a man on the cheek a few times. Young men and young women dance together at a school dance. A young man asks another young man if his girlfriend is "hot." Two young men talk about "hookin' up with chicks." A young man touches a young woman's hand and then pulls away. A man touches another man's knee and they both jump and move away from each other. Two young men talk about asking young women to a dance. A young man dances on a stage thrusting his hips several times. Five young women wearing short skirts that reveal bare legs dance on a stage. A woman wears a low-cut dress that reveals cleavage, and young women wear evening gowns that reveal bare shoulders and backs. A man tries to sell an herbal product that claims to enhance women's breast size. We see the engorged udders of a cow.

VIOLENCE/GORE 4 - A man shoots his cow in the face at close range (we see the man holding the shotgun, then hear the shot), a bus load of children passes as we hear the shot, they apparently see the shooting and they scream. A young man is bullied repeatedly: a young man holds another young man in a chokehold then slams his head against a locker, a young man is held by the neck and shaken repeatedly until he gives the bully money, two young men tussle over a bike until two men look at the bully threateningly, a young man is kicked in the leg, and a young man shoves another young man against a locker a couple of times. A young man throws an orange at a van, the driver gets out, tackles the young man, holds him by the throat, the young man elbows the man in the chest and he crawls away in pain. We hear a man being beaten (we hear him grunting and hear the crunching of the landing blows) and see him later with his arm in a sling and a bandage on his nose. A young man holds a man in a chokehold. A woman rides a four wheeler over a sand dune and jumps off the peak (we hear that she has been injured). Two young men ride a bike over a ramp, one crashes into the ramp support (a cinder block), bangs his crotch on the bike bar and lands hard on the ground. A young man holds a metal pole between his legs, puts a metal ring around his head and plugs in a machine that is attached to both, he grimaces and asks for the machine to be unplugged as an electrical charge is sent through his body. A man throws a steak at a young man as he rides by on a bike and it hits him in the face. A man is hit in the head several times by a martial arts instructor. We see a TV commercial for a Taekwondo school and a man demonstrates a few martial arts moves. A man tells a young man to try to hit him, one ends up being smacked on the head and the other being slapped in the face. A young man goes into a huge chicken coop and forces two chickens into a small cage. A young man yells at his pet llama, telling her to eat, and he throws the food on the ground near her when she doesn't seem interested. A young man shoves tater tots in his pants pocket (to eat later). A young man throws an action figure tied to a string out of a moving bus and drags it along, bouncing off the pavement. We see food on a table with flies buzzing around it, a man puts a raw egg into a pitcher of orange juice, and a young man drinks some and gags. A young man burps.

SUBSTANCE USE - A woman may be having a beer.

MESSAGE - Being different is OK. We can find friendship and love in the most unlikely places. 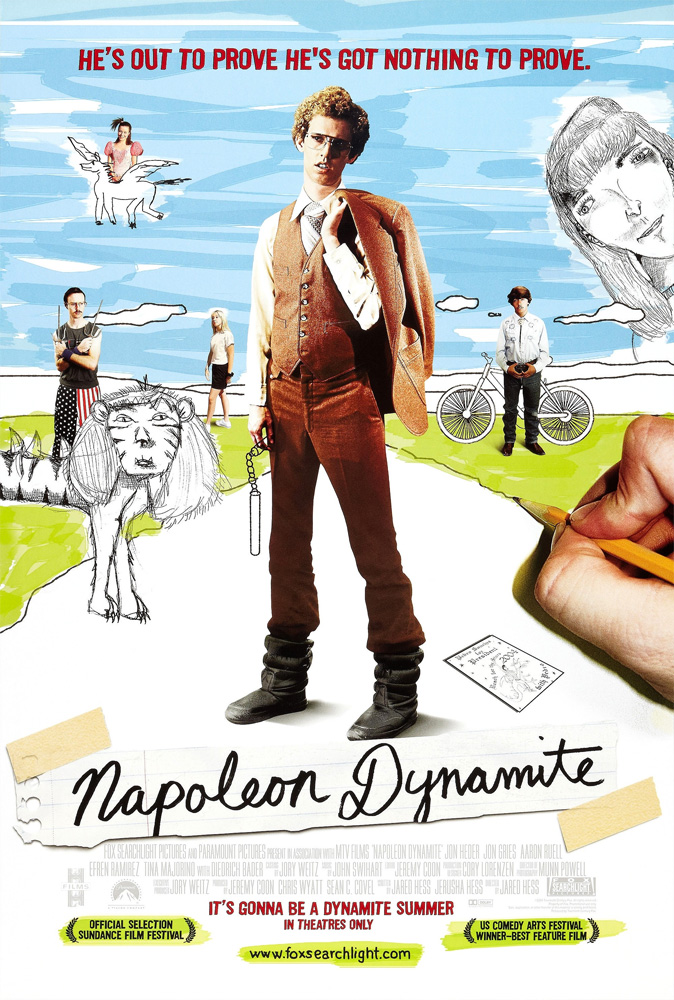