Why is “My Little Pony: A New Generation” rated PG? The MPAA rating has been assigned for “some thematic elements.” The Kids-In-Mind.com evaluation includes several scenes of crowds and a mob raging with characters proclaiming racist views, a few scenes of risky adventures, and some mild language and name-calling. Read our parents’ guide below for details on sexual content, violence & strong language. This musical follows an Earth Pony (voiced by Vanessa Hudgens) and a Unicorn (voiced by Kimiko Glenn) as they try to restore peace among the alienated races of Earth Ponies, Pegasi, and Unicorns in the land of Equestria. Also with the voices of Michael McKean, Sofia Carson, Liza Koshy, James Marsden, Ken Jeong, Jane Krakowski, Phil Lamar and Elizabeth Perkins. Directed by Robert Cullen, José Luis Ucha & Mark Fattibene. [Running Time: 1:30]

– Five Ponies facing away from the camera shake their hips and swish their tails as they dance.

– Three races of Ponies harbor false ideas about the other races, including that Earth Ponies smell like sardines, have tiny brains, and are lazy, Unicorns slay other ponies using razor-sharp horns and electrically zap other races with lasers in order to fry their brains and eat them, as well as eat their own young, and Pegasi fly and can read minds; none of these are true but in several scenes Ponies of each race encounter a Pony or Ponies of another race, scream, run away, and shout about danger and destruction. Unicorns are said to grind the hooves of the other races and make snacks of the grindings.
► A Pony holds a marketing show to spread lies about other Pony races and insists that the attendees need the protective equipment she sells, like anti-mind-reading-hats; she shows posters of silhouettes of Unicorns zapping lasers out of their horns and Pegasi flying toward Earth Ponies to harm them; a model Pony is carried away by a backpack of helium balloons and is not seen again until the end of the film, another Pony objects to the lies and is grabbed by metal claws and swung around the room while slime balls shoot from a small machine at her (she is not harmed) and a sheriff tries to arrest her, but she releases a Unicorn from a metal box and the two of them escape. A young Pony yells, “Let’s BBQ a Pegasus!” A deputy sheriff spreads lies about other Pony races and revs up the town’s Ponies into an angry, shouting mob that stomp-marches around in anti-mind-reading hats and chants “Mob, mob, mob,” and sings “Get angry,” several times; the deputy dresses like a South American dictator and proclaims himself emperor.
► A flying Pony chases two other Ponies up a cliff and one Pony falls off the cliff, but a Unicorn grabs her by one leg and pulls her to safety. Two Ponies nearly fall off a tall, snorting, smoke-spewing robot, but regain their footing; a Pony falls through a trapdoor on the robot and descends quickly on an elevator platform and screams, but lands safely. A large robot and a small machine throw slime-balls and hit Ponies and some fall, but none is hurt.
► A group of Ponies disguised as Unicorns come to a bridge with a gap in it and one of the group pushes over a thick tree that crashes along the bridge to fill the gap and the group finds an entrance to a dark forest with signs that read “Keep Out”; Unicorns inside look sad, hang their heads, walk slowly, and an old Unicorn stands under a tree as apples fall on her head, repeating, “Ow, ow” (she is not injured) until a visitor Pony says “magic” and all the forest Unicorns begin hopping from hoof to hoof, chanting “Bing bong bing bong” for several seconds as a superstitious chant against bad words that include “magic, wing, feather, and mayonnaise.”
► A Pony challenges a huge Unicorn to a dance contest and wins a needed crystal, but an argument ensues when the visitors’ horns fall off; the Pony flees with the crystal and another stone from a stolen tiara. A Pegasus hits a Unicorn in the head with a small toy ball and a tiny dog knocks over a Pony (no injuries are seen). Several Ponies of all races threaten to use magic powers (which they don’t have). A Pony and a Unicorn connect two crystals, but nothing magic happens and all the gathered Pony races look sad.
► A Pony and a Unicorn meet a Pegasi queen and we learn that none of the three Pony races have magic or special powers any longer; the queen gasps and yelps in fear and has them taken to the dungeon, which is a spa room with massage chairs, etc.; another Pegasus helps them escape and goes with them. During a royal show, a Pegasus steals a queen’s crown and later, three flying Pegasi tip over in the air and the cables holding them in flight become visible causing the crowd to become angry and shout, “Fake!” several times as the royals flee; the queen is arrested and we see her mugshot.
► A sheriff shouts at other Ponies to pick up litter several times; he leaves his son as deputy-in-charge when he goes on a hunt for a lawbreaker and the son becomes power-hungry and nasty to the town’s Ponies. A deputy sheriff shouts, sneers and kicks a file cabinet. After an introductory scene in which we see a father pony, other ponies speak of him in the past tense, indicating he passed away.
► Two Pegasi run away with an Earth Pony and a Unicorn, followed by a sheriff who decides to help them find magic crystals that may bring peace to all Ponykind; a tiny snarling dog with small wings befriends the sheriff after chasing the group.
► A deputy sheriff drives a shouting mob and his war machine that looks like a truck that spews smoke toward other Ponies; the truck hurls slime balls at all Ponies and the deputy’s mother shouts at him to stop but he mocks and sneers at his father as the machine wrecks a home and the top story falls to the ground with a crash; a Pony awakens in the rubble and tells all Ponies that love is the answer to peace, not crystals, as three crystals join, create a wave of colorful light, and lift her in the air, where she sprouts a glowing horn and wings and magic and peace are restored as we see unicorn horns light up and Pegasi fly, along with a tiny flying dog.
► A pony shouts, “Where’s the bathroom?” and another pony steals food from a pony at an outdoor cafe while running past. A pony spits out a drink in surprise. Another pony spills a can of pork and beans onto a floor. A Pony snores, two birds snore, and several Ponies snort in several scenes.

My Little Pony: A New Generation SUBSTANCE USE

– Education about other cultures can promote understanding and prevent senseless aggression and war. 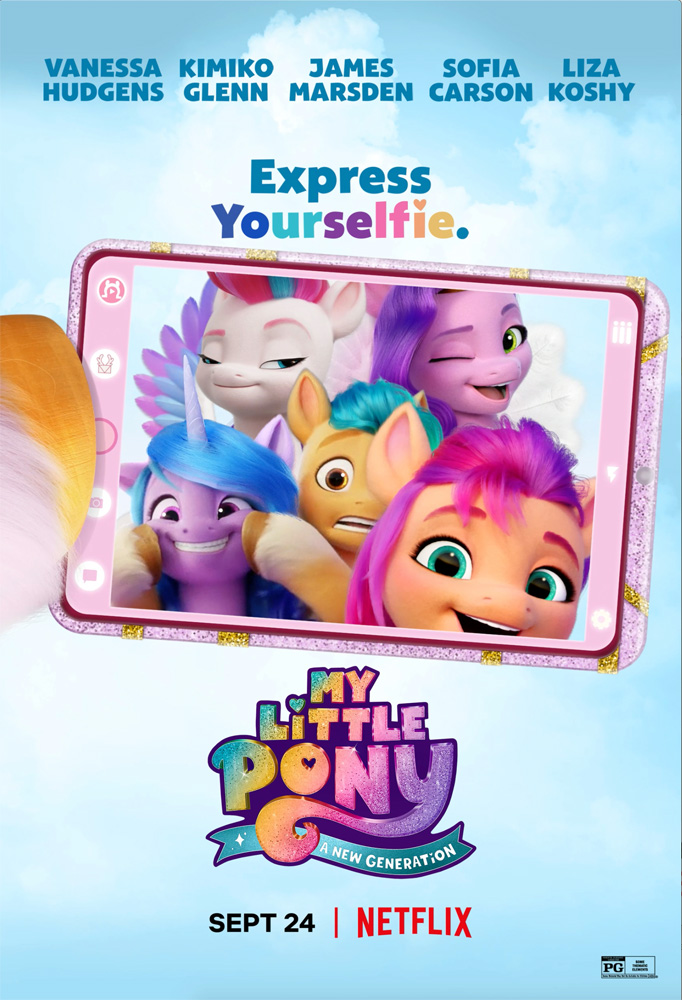