SEX/NUDITY 3 - Some sexual innuendo and a few kisses. A clothed man falls on top of a clothed woman in a bath tub; they lie there for a little while with their faces nearly touching, then they switch positions and she sits on top him (with most of her bare legs and lots of cleavage visible) to open a safe next to the tub. A woman sits on a man's lap and kisses him; in the next scene -- obviously post-coitus -- we see them talking and then kissing in bed (his bare chest is visible, and we briefly see her bare back). We see a man's facial expression as a woman changes clothes in front of him; he grabs her arm while she's presumably nude (we only see a flash of her bare back) and kisses her. We see a woman wearing a couple of cleavage- and midriff-revealing tops.

VIOLENCE/GORE 6 - Many people are shot and fall to the ground; no blood or bloody gunshot wounds are visible, except in two of the shootings. In several scenes gunfire is exchanged and people are nearly shot. A handcuffed man with a bloody nose is dragged into a room, kicked in the face, shot in the knee (a man then steps on his wounded knee), and shot repeatedly until he slumps over. A man twists another's neck, presumably killing him. A man's finger is placed in a cigar clipper, and after another man threatens to cut the finger for awhile, he finally does (we only see the man's pained expression, then see his bandaged finger throughout the rest of the movie). In an extended fight scene men punch and kick each other in the head and torso, and they also choke, elbow, flip, tackle, and throw each other; one is hit in the head with a rock, one is slashed in the cheek and back with a knife (we briefly see the man's bloody shirt and see blood on his cheek throughout the rest of the fight), one is nearly stabbed in the eye with a knife (the knife is held less than an inch from his eye for a little bit), and one's head is thrown onto a pointy rock and he appears to be dead. A man breaks into a compound and attacks about six guards; he kicks, punches, head-butts, chokes, and flips them until they fall to the ground. A woman slaps a man's face, a man elbows another's face, a man grabs another by the neck and holds him against a wall, a man grabs a woman and holds his hand over her mouth briefly, a woman somewhat playfully knees a man's stomach, and a man closes a door on another (which causes his bandaged finger to bleed a little). Fumes fill the back of a limo and cause a man to choke and lose consciousness; in a later scene he's "gassed" again while in a hospital, hooked up to tubes and lying inside a plastic tent (we later see that he's fine and back inside his limo). A rock climber nearly falls off the edge of a cliff. Two men drive their motorcycles toward each other, jump off, hit each other in the air, and land hard on the ground below a small cliff. During an extended car and motorcycle chase people exchange gunfire, two riders are shot off their motorcycles, a car bumps into the back of a motorcycle, a few cars are bombed and then explode, and a couple of cars explode after running into or being hit by other cars. Two cars chase and run into each other, weaving in and out of traffic and nearly hitting other cars; they lock side mirrors and spin toward the edge of a cliff, resulting in one of the passengers dangling over the side of the cliff (the person is rescued). Several explosions sometimes knock a few people down; also, a plane explodes when it flies into a mountain, obviously killing all of its passengers (we see the charred wreckage in a later scene with no bodies visible), and a car is bombed and explodes (we see pieces flying). Effigies are burned during a religious festival. We briefly see photos of a corpse with a bloody face. We see video still-frames of a virus-infected man's face as it gets more and more blotchy (it looks like the skin is decomposing) and finally has blood running down it. We see a close-up of a large needle injected into a person's ankle; also, two people inject themselves with a virus (we see small red marks on one of the person's arms). We hear a squishy sound as a man presumably steps in feces.

MESSAGE - No mission is impossible. 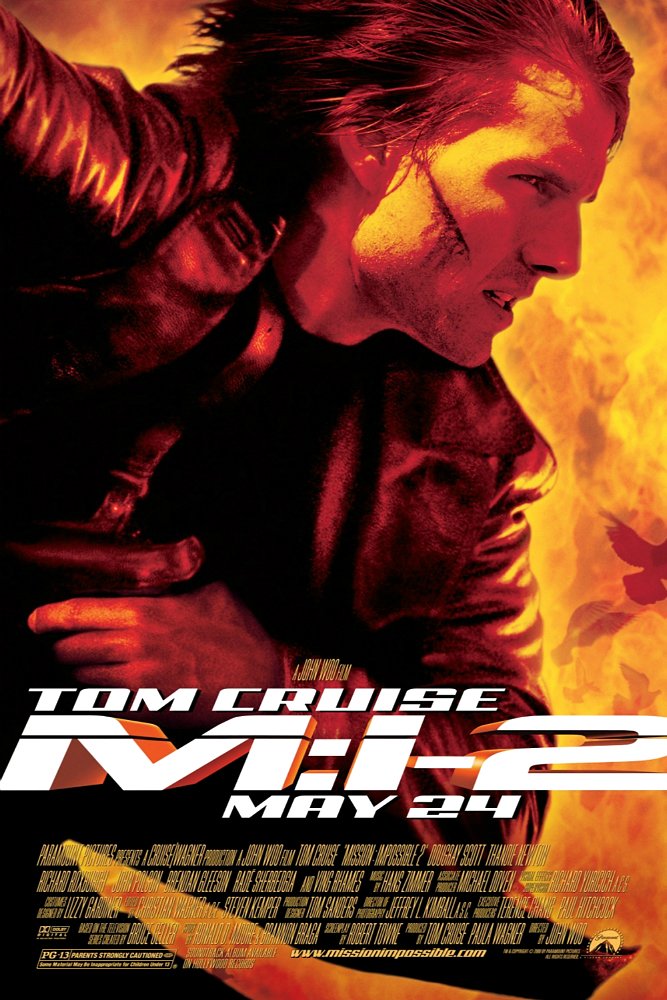