The third installment of the sci-fi action adventure finds the last free humans surviving underground and preparing for an onslaught by the machines who are bent on destroying them. Meanwhile Neo continues exploring his powers and trying to understand what his destiny is, and Agent Smith keeps multiplying and getting stronger and stronger, threatening both the real world and the Matrix. Trinity (Carrie-Ann Moss) and Morpheus (Laurence Fishburne) are along to lend a hand. Also with Hugo Weaving and Jada Pinkett-Smith. Directed by Larry & Andy Wachowski. [2:09]

SEX/NUDITY 5 - Men and women dance in a busy nightclub scene: we see men and women kissing and caressing each other (one person squeezes a woman's nipple), we see topless women with bare breasts exposed (in the background), we see shirtless men with bare chests, women wear very short skirts that reveal bare thighs and underwear, and some people wear S&M outfits. A man and a woman hug and kiss, a man and a woman kiss and hug several times, a man and a woman hug several times, and two men hug. A woman puts her arm around another woman as they walk together. A woman wears a very short skirt that reveals part of her buttocks.

VIOLENCE/GORE 7 - Three people enter a room with several people in it and they all begin shooting back and forth: rubble falls from the ceiling, walls crumble, people are hit and blood sprays, and one person is kicked and punched. A man holds a gun on three people, they chase him through a train station, he fires on them, and he jumps in front of a train (he is not hit). Three people fight with two other people exchanging punches and kicks, and one man is shot three times (we see bloody holes blow through the back of his clothes). A man stabs a woman in the chest with a scalpel and she falls dead on the floor with a bloody spot on her chest (we see the scalpel sticking out). Two women are chased by a machine called a Sentinel (it looks like a metallic octopus) and one is stabbed in the leg and then through the back (we see blood pour from her wounds) and she falls dead. Men strapped into large metallic frames train their guns on incoming Sentinels and fire as what looks like an infinite number of them swarm and fly toward them. One man is shoved off a high platform, another man is slashed to death (we see his face slashed and bloody) by a swarm of Sentinels and we watch him die. A man is grabbed by the head by a Sentinel and taken away, and another is grabbed and tossed around (they both scream). A man grabs a woman around the throat and holds a scalpel to her throat, she throws him to the floor, and she kicks him repeatedly in the face (we see a very bloody face with a large open gash across his nose); he then hits her head against a wall, another man holds a gun on them, and the woman is shoved down a hatch. Two men fight, one man shoots at the other man, and one man burns the other man's eyes with an electrical cable throwing off sparks -- leaving the eye sockets scorched; we see reddened, blackened wounds. Two men fight in an extended scene: they charge toward each other repeatedly causing progressively larger shockwaves with each hit (a water-filled mushroom cloud, glass shattering in nearby buildings, etc.), many punches are exchanged, one crashes into a street and leaves a large hole, one is thrown through the wall of a building (one has blood on his lip), and they both plunge toward earth and crash into the ground creating a huge crater and causing cars to flip and be thrown in the air. One man punches another in the face in slow motion and his face flaps and molds to the man's fist. A roomful of people hold guns on each other, verbal threats are exchanged and a fight breaks out and people punch and kick each other. A man plunges his fingers into a woman's arm, what looks like quicksilver spreads across her body and she transforms to look like him, and he laughs maniacally. A man is hit in the chest by shrapnel after an explosion (we see blood on his shirt). A man plunges his hand into a man's chest, he is covered with quicksilver and is transformed to look like the other man. A man beats another man with a metal bar, and he falls to the floor. In a scene where humans are represented as made out of bright, orange light, one man knocks another man's head right off with a metal bar; we see the head exploding in a bright flash. A man punches a man hard in the stomach sending him through the air, and crashing into a wall making an indentation. A woman holds a gun at a man's head and many other people around her hold guns on her. When a man is "jacked into" (i.e. enters) the Matrix we see a probe being rammed into the back of his head. Huge drilling machines break through the walls of an underground city and fall down below causing much destruction in a few scenes. There are many scenes with Sentinels chasing a flying craft: most of the time they attach themselves to the ship and endeavor to break through, one time a ship tries to maneuver very tight tunnels and is chased and thrown off as it goes. Huge machines fire at a flying craft, the projectiles explode and the craft flies through flames. A flying craft crashes into a wall, and the passengers are shown unconscious: we see one person is impaled with metal rods (with blood around holes) and we watch as one character dies. A man begins to glow from the inside, his flesh cracks as light shines through and he explodes into bits and then many other men experience the same fate and we see a large explosion. A flying craft crashes through a gate causing explosions and fires. A huge explosion causes a shaft to seal. We see two men lying unconscious on hospital tables with monitors attached to their heads (they are apparently comatose) and one has many cuts on one arm. A man throws a plate of cookies against a wall. A man talks about trying to save his daughter who is scheduled for "deletion" (she is a computer program). A man says he "wants the eyes of the Oracle." Many small machines gather around a man as he walks, and a huge machine face rises up in front of him and speaks. We see fields of what we think are humans growing in cocoon-like cases (we see glowing red lights and machines tend to them).

MESSAGE - Everything that has a beginning has an end. 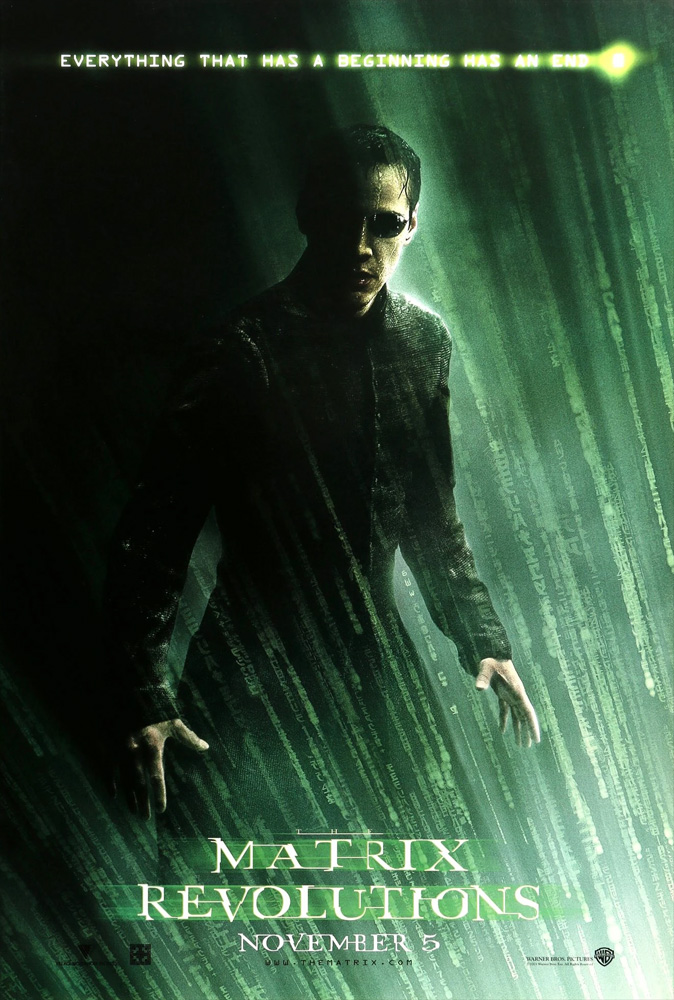