This ensemble comedy tells several slightly intertwining stories set mostly in London: Hugh Grant stars as the newly elected British Prime Minister, who wants to make a difference and feels that he should not support American policies blindly. He is unmarried and falls in love with a young woman (Martine McCutcheon) working in his office but doesn't know what to do about it. Liam Neeson is a man whose wife has recently died and is struggling to connect with his young, unhappy stepson. And Alan Rickman finds himself being swept into an affair with a young co-worker, while his wife, Emma Thompson, tries to keep their family together. Also with Laura Linney and Colin Firth. Directed by Richard Curtis. [2:09]

SEX/NUDITY 7 - A man and a woman kiss, he takes off his shirt (we see him bare-chested), she takes off her dress (we see her in bra and panties), and they lie back in bed kissing. A woman jumps into a man's arms and they kiss. A man and a woman hug and kiss, a man and a woman kiss in several scenes (some romantic and passionate, others friendly), and a girl kisses a boy on the cheek. We see a montage of many hugs and kisses between different people in airports. An ongoing element is that a man and a woman are actors on the set of a pornographic movie and we see them rehearsing scenes: The woman removes her top (we see her bare breasts), she leans against a bed post and the man thrusts his hips toward her while caressing her bare breasts; the man and woman lie in a bed nude while thrusting (we see her bare buttocks and breasts and his bare chest and thighs); the woman's face is in the man's crotch and her head bobs back and forth (they are both nude and we see his bare chest and thighs and her bare back and buttocks); the woman sits nude on a man's face; and the woman leans against a bed post and the man stands behind her thrusting his hips toward hers (they are both clothed). We see through a curtain three women undressing themselves, and then undressing a man. A man and a woman lie in bed together. A man on TV thrusts his hips toward the face of a seated man. A man snuggles into a woman's neck and appears to be whispering to her (he's a politically and socially powerful man who makes inappropriate advances toward her). A man and a younger woman dance close together, she whispers in his ear and his wife watches them from across the room. Two men hug. We see photographs of nude men from the back (we see bare buttocks) and a woman with decorated bare breasts (Santa hats adorn her nipples); another photograph shows completely bare breasts. A man takes off his clothes and a guitar covers his crotch. A woman takes off her clothes and we see her in her bra and panties. A woman is wrapped in a blanket with bare shoulders exposed. Women wear outfits that reveal cleavage and bare thighs. A woman wears a low-cut top that reveals cleavage. A woman lies in bed in a sweater and shorts (we see her bare thighs). Men and women dance at a party. Two men talk about the events of a bachelor's party. A man makes crude remarks about a young woman. There are flirtatious and sexually suggestive remarks made between characters: A woman spreads her legs apart while talking to a man and makes suggestive remarks about mistletoe and dark deeds, and a woman calls to a man from another room, not aware that her husband has just come home. A woman says "I want you twice" to a man, a man talks about "having sex in every room," and a man flirts with three women and they talk about sleeping nude in a very small bed together. A young boy talks to a man about being in love.

VIOLENCE/GORE 1 - A man swings at a woman. We hear that a man's wife died. We see a funeral on a movie set. A man says "I could have him murdered" (jokingly).

MESSAGE - Love is all around us. Don't ever miss the chance to say "I love you." 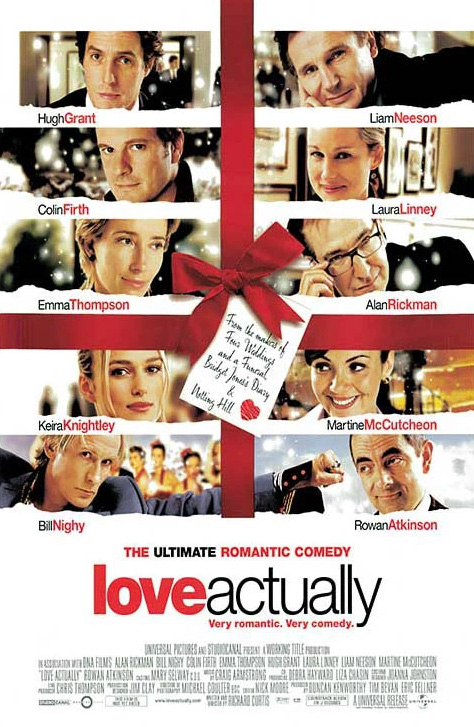