SEX/NUDITY 3 - Several women wear short shorts. A few women wear crop tops that show cleavage and abdomens. A woman wears a semi-sheer sweater that shows the outline of a bra and another woman wears a lacey sweater with cuts outs over a bikini top that reveals cleavage and abdomen. A woman wears a clingy tight miniskirt and also reveals cleavage. A woman wears a tight knit dress that emphasizes her buttocks. A young girl wears a halter top and a wide tulle mini-skirt in a pageant. A man sprays faux tanning material onto his preschool aged daughter, who is wearing a bikini. In a close-up a woman wears a bra-like top revealing cleavage and abdomen. Two men are shown shirtless.
► A man and a woman kiss briefly in a tavern.
► We hear that a woman ran off with a truck driver from Florida. A man says, "The assistant manager started getting handsy with our sister." A man removes his shirt in the back of a car and tells the woman driver, "I'm about to get naked back here. No peeking!"

VIOLENCE/GORE 5 - A prison dining room barroom brawl occurs between inmates and guards, and we see kicking, choking, throwing, jumping, and punching (no blood shows); we later see that the inmates have pinned three guards into straight back chairs by wrapping cellophane around their arms and upper bodies. A fight among three men occurs and we see kicking, choking, throwing, and punching (no blood is evident). A man slams another man's head into a bar top, but no blood flows. A prison guard dumps an inmate's food on the floor, tells him to clean it up, and the warden kicks the prisoner in the face below the frame; the injured man comes up with a little blood on his nose and is placed into solitary confinement.
► A man tosses a whiskey bottle into an open car window, tosses a lit cigarette lighter in after it, and causes flames to fill the passenger compartment; three other men film the fire on phones and another man snatches away two cell phones and tosses them into the fire. Inmates fake a fire by igniting a wastebasket and two escapees ride into the prison yard dressed as fire fighters on top of a fire truck.
► A flashback shows miners digging a man out of dirt in the bottom of a tunnel under a race track using their hands; he is taken away on a gurney and we do not see him again. Two men break out of a prison through a panel in the washroom and ride out in shelving hooked to the underside of a laundry truck. A man drives a car through the window of a convenience store, shattering glass everywhere. A woman walks outside to see that someone sideswiped her car.
► A man places an explosive concoction into a pneumatic tube carrier, and sends it through the tubes; it comes back and another man catches it, shuddering with fright and the other man adjusts it and resends it; the explosive tube stops above a pit of money and explodes in a small puff of smoke and a flash of fire and men vacuum the money out of the pit before accidentally sucking the prosthetic arm off one of the men. A man mixes chemicals for a bomb and slips the bottle into a large electrical box at a race track; it explodes briefly into tall flames and extinguishes as inside the concessions units, and clerks see smoke wafting out of pneumatic tube entrances. A woman paints a box of cockroaches with nail polishes,, they are placed into pneumatic tubes under a race track and end up in a banking vault, where a woman sees them and screams.
► Silent TV footage shows a few racecars crashing into a wall. A racecar slides into a wall on a track, but the driver is OK -- he had fallen asleep because he drank champagne before the race (please see the Substance Use category for more details). A silent TV sequence shows a large fire filling the screen briefly, followed by soldiers in a line saluting.
► A bartender has a large unwieldy prosthetic forearm and hand from an injury in the Iraq War and his brother has a chronic knee injury from the war that forces him to wear a large knee brace and limp; another man says that if you put both men together, you'd have one normal person.
► Prisoners argue briefly with the prison warden. Two men offer to break an explosives expert out of prison and sneak him back in after a robbery. A man mentions a water shortage in town because chemicals from a plant up river leak into the water supply. Several people mention that a family is cursed and one man denies it. We hear that there are several sinkholes around a race track.
► A man removes his prosthetic arm several times and reveals a stump that narrows to a gathering below the elbow. In a clinic, a man receives a tetanus shot for a cut over his eye, which is bruising. A man with black eyes and a broken nose under a butterfly bandage says that he was in a fight; we saw him arguing with another man and throw a racing helmet at him, but not a fistfight. A dog with three legs walks across the screen.
► A man in a prison drinks contaminated water from a tap and vomits a substantial amount of chunky orange material onto a floor twice; he is taken to the clinic and put to bed and we see a bandage on one arm. Two men dive into a garbage shoot and land on trash bags.

SUBSTANCE USE - A bartender juggles a vodka bottle with one hand and mixes a drink, a bartender pours 8 shots of vodka (drunk by himself and others), a man drinks from a beer bottle at a bar and two beer bottles are seen on the far end of the bar in the background, a man drinks from a glass of beer at a bar and the bartender holds a bottle of whiskey, two scenes show a living room coffee table littered with empty beer bottles, a man orders two cans of beer and we see him drink a full can of beer at a race track, a man on the infield of a race track reluctantly drinks from a magnum bottle of champagne (he later passes out from his blood sugar dropping), a bucket with two beer bottles on ice is shown on a coffee table and a bucket holding a bottle of champagne is seen on the backseat of a limo, a women drinks from a glass of wine, and a prosthetic arm and hand holding an empty beer bottle is seen on a table as a decoration. Men smoke cigarettes in a bar as well as outdoors and in a tunnel and in an office, and two men smoke cigarettes on a porch.

MESSAGE - Helping others and caring for one's family are more important than having money. 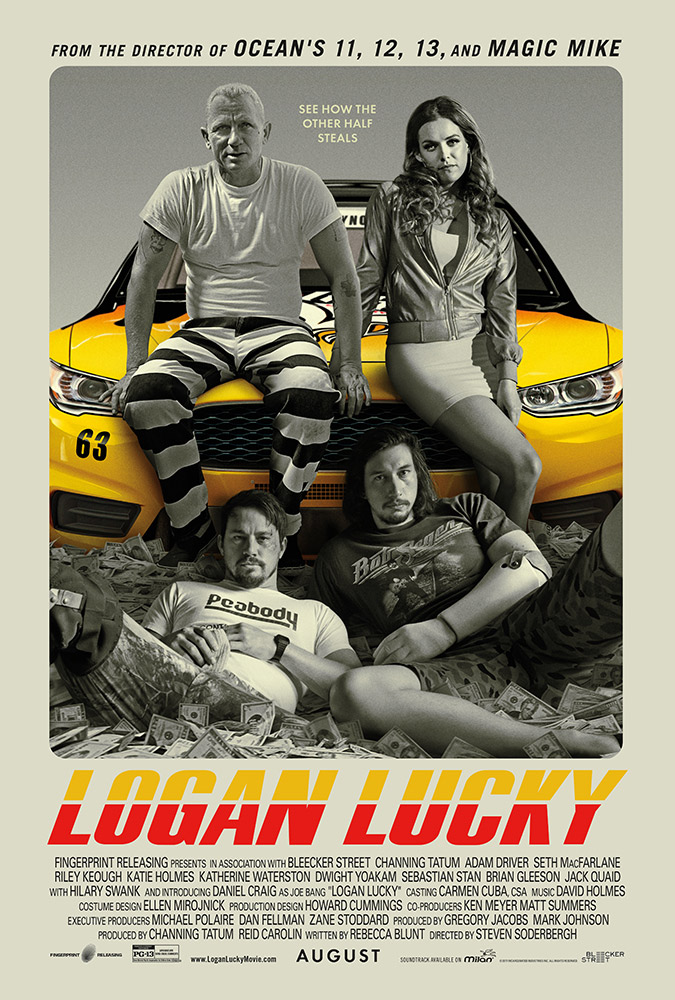