In this comedy, the son of the Devil (Adam Sandler) tries to save his dying father (Harvey Keitel) by going to earth to find his two evil brothers, both of whom are vying for Satan's job as ruler of hell. Also with Patricia Arquette, Rhys Ifans, Tom 'Tiny' Lister Jr., Kevin Nealon, Jon Lovitz, Allen Covert, Ozzy Osbourne, Dan Marino, Reese Witherspoon, and Henry Winkler. [1:24]

SEX/NUDITY 5 - Nearly all the sex in this film is played for laughs. A little sexual innuendo, including references to herpes, adultery and animal sex. A man puts a pineapple up another man's buttocks; a man puts a flask up another man's buttocks (we don't actually see any bare buttocks). A big bird humps a clothed man from behind, and a dog humps another from behind and "talks" dirty to it. A Peeping Tom watches a woman undress in her bedroom; we see her take off her shirt and massage the tops of her breasts with her bra still on. A man's skull turns into a pair of breasts (obviously looks fake). A man drops his pants on the street but we only see his bare legs. We see a woman in her bra, several scantily clad women during a couple of scenes at a strip club (no nudity), a man's bare chest through an open robe, and a shirtless cross dresser in women's underwear who plays with his nipples (we see him several times in the movie).

VIOLENCE/GORE 5 - Nearly all the violence in this film is played for laughs. A man is hit by a truck and blood splatters on two men. A man emits a light beam that kills a man; he explodes and splatters all over a crowd of people. A few people are run over by a subway train, another is hit by a bus, and several people in wheelchairs crash into a bus. A man tries to drown a man to death in a bath tub. A man slowly loses his body, piece by piece; one time his ear falls off, next his legs, and by movie's end he's nothing but a mouth and arms. A boy shoots a man with a slingshot and he falls out of a tree, a woman hits a man over the head with a brick, a man is kicked and punched in the head several times, a man punches his own crotch several times, a man pushes another down several stairs, a man grabs two others by the neck, a man hits another over the head with a pillow several times, a dog shoots an arrow from its butt and it goes into a man's leg, water from a fire hydrant knocks a man through a glass window, a man walks into a lamp post, several people fall into hell, a man's hair catches on fire, several men jump into a fire but aren't hurt, and a man blows fire out of his mouth. A man turns into a bunch of spiders, and a man turns into a bat. A man shoves his finger up his nose and pulls a man out of his head; also, a man comes out of another man's mouth. A man eats a bat, a woman spits into a man's mouth, a drunken 10 year-old kid vomits, and a dog urinates on a welcome mat.

MESSAGE - There's plenty of room on earth for the son of Satan. 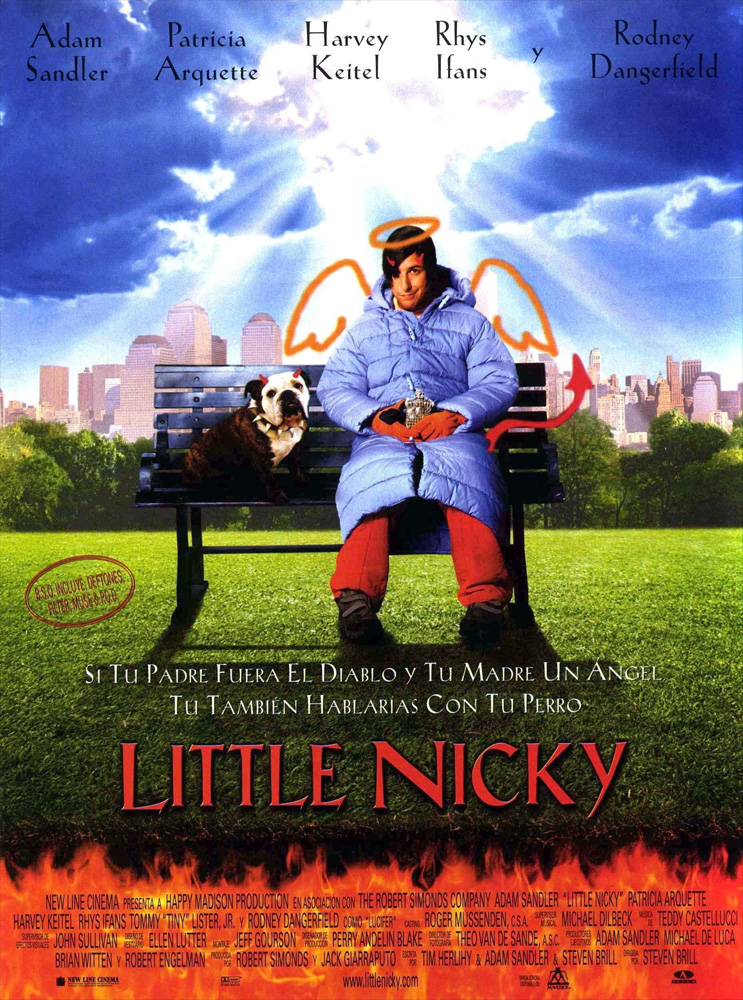