Disney animated feature about an alien creature that's essentially a genetic experiment designed to destroy everything he touches. He crashes on Earth after escaping from captivity, and resembling a small dog, he is adopted from the pound by Lilo, a young Hawaiian girl who recently lost her parents in a car crash. She names him Stitch, and with her help, he discovers he can actually care for someone else. With the voices of Tia Carrere, David Ogden Stiers, Zoe Caldwell, Kevin Michael Richardson and Daveigh Chase. [1:20]

SEX/NUDITY 1 - A young man flirts with a young woman and asks her out on a date a few times. An alien tries to kiss an old woman and we hear the woman scream. A girl talks to an alien about romance and loving. A woman is shown in shorts and a T-shirt that reveal her bare abdomen, cleavage and thighs through nearly the whole movie. Women are shown doing hula dancing and wearing traditional hula garments -- grass skirts and tube-type tops. A young man is bare-chested in several scenes. We see several beach and surfing scenes with people in swimwear; bikinis, swim trunks, shorts, etc.

VIOLENCE/GORE 3 - The aliens we see vary in appearance: some have many eyes, some have one eye, some have many legs/arms, some have two tongues, some are very large and some are very small; none are terribly grotesque. The guns that are used are alien weapons and they shoot a green, glowing stream. A girl tackles another girl, pulls her hair, hits her in the face and we hear that she bites her arm. A girl slams a door on a woman's head. An alien shoves a girl in several scenes, breaks things and generally wreaks havoc; on one occasion, he sends people running and screaming from a beach. A young woman and girl yell at each other on several occasions. An alien is run over by several trucks and we hear and see him thumping under the tires and being tossed in the air; it is said later that he was thought to be dead. A girl and an alien are trapped in a net and placed on board an alien ship that is headed for the alien's home world. An alien shoots at and throws things at another alien and in the process destroys a house; a ceiling falls on an alien in the house, one alien hits the other with a car and an alien gun overcharges and explodes burning the house to the ground. An alien drives a truck carrying flammable material into a lava pit, the truck explodes sending the alien hurtling through the "windshield" of a spaceship; he tosses the occupant out, and the occupant in turn fires his weapon at the ship causing it to explode. While surfing, an alien is pulled under water by another alien and is unconscious when he is brought back to shore. An alien dumps a girl off her big wheel and steals it from her. Two large guns are trained on an alien and they begin firing; the alien escapes, runs through vents (he's still being shot at), steals a smaller ship, and is chased by many other ships. A young woman hits an alien with a tree branch several times. An alien shoots at raindrops not knowing what they are. A young woman is nearly hit by a car and she yells and kicks the car's bumper. An alien bites the finger of a guard and the guard threatens him with a laser gun. A needle is poked into an alien and some fluid is extracted. Two spaceships fly through peaks and crash into each other. An alien is blasted by exhaust flames from a spaceship and plummets smoldering and bouncing off mountain peaks. An alien and a young man are hit with a volleyball, an alien dumps a sno-cone on a dog's head, and an alien licks the side of his glass containment vessel and we see slime dripping. Something shoots through the sky in flames and we hear it hit the ground in the distance. Girls are mean to another girl; not inviting her to play. A young man dances with flaming torches, drinks a flammable liquid, spits it out causing a flare-up and sets a thatch-roofed stage on fire; we see him a bit charred. An alien is flung from a tree and sails through the air. Mosquitoes swarm an alien and we see him later wrapped with bandages and covered with welts. An alien shoves two pieces of cake in his mouth, then pulls them out of his mouth, and reaches down his throat for a cherry to put back on top. An alien sticks his tongue in his nostril. An alien wags his backside at aliens and people a few times, and a dog sniffs an alien's backside.

MESSAGE - Family can be made up of anyone as long as there's love. 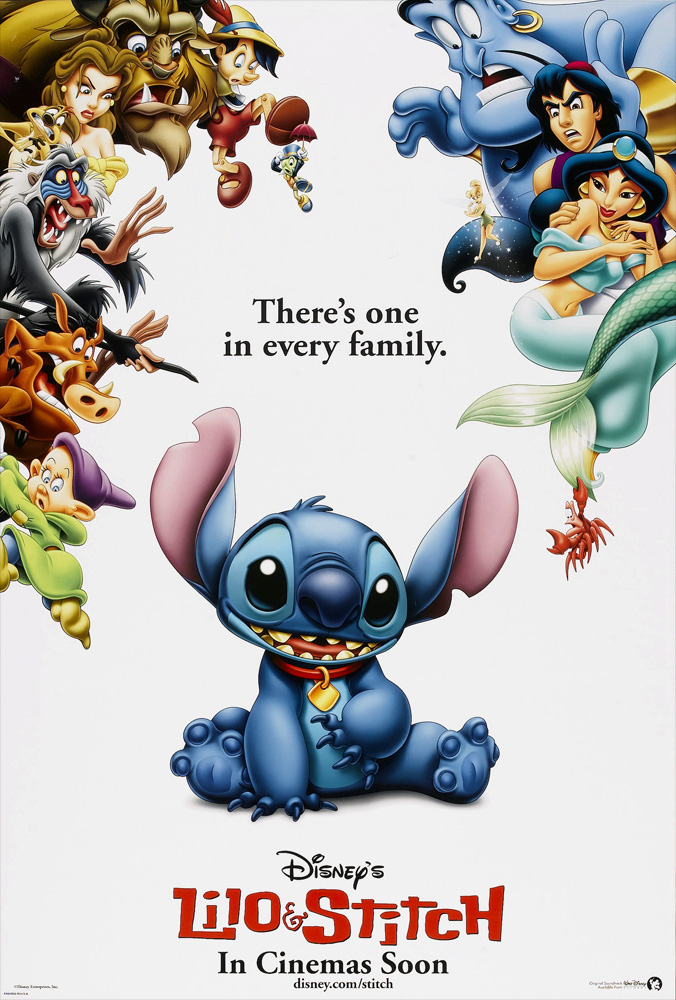