SEX/NUDITY 3 - A man and a woman kiss passionately and a man throws a kiss to a woman. A man slaps a woman on the buttocks. We see a man bare-chested. Women wear dresses that expose cleavage. A man says to a woman that he wished he'd be able to "nail you one more time." The Invisible Man says "I am naked in the snow. I can't feel any of my extremities, and I mean any."

VIOLENCE/GORE 5 - A woman snarls, her eyes turn red, she tears at a man's neck, her mouth is covered with blood, she bites his neck again and then licks her lips and hands (she's a vampire). Also a vampire bites a man and we see her pointed teeth. A man is shot several times, a man is shot in the back as he runs away, a man is shot in the chest and blood seeps into his shirt, a man is stabbed in the arm, and a man is stabbed in the back. A man is stabbed in the stomach and pinned to a wall, whereupon he decomposes to a dusty skeleton. A physically enhanced man chained to walls hits many people who try to approach him, and they are tossed through the air. A woman stabs a man in the back, he slashes the woman in the face, she slashes him on the face, and we see the wounds on both of them heal. A man is hit in the crotch and doubles over, and a woman is stabbed in the stomach and falls back. A man shoots at several armed men, they shoot back with pistols and then with automatic weapons. Men fight with punches, one throws two knives that pin a man's shirt to a post, one man is hit with a bottle and falls to the ground, and one man is impaled on a rhinoceros horn that hangs from a wall. A man is shot in the back but is just wounded (he later swallows a poison capsule that kills him). Two physically enhanced men fight (one is larger than the other): the large one throws the smaller against walls, and then the larger man is stabbed in the hand, he crashes through walls, and is slashed many times with a sword; the smaller man shrinks back to human size and runs, and the larger man is trapped in a crumbling building. Two men fight: one is punched in the face three times, one is held with a chain around his neck, and one is stabbed in the back and dies from his wounds. An invisible man with a knife slashes at a man repeatedly, and the man shoots at him as he runs away. Five people are surrounded by many men with guns drawn, they begin shooting back and forth, and one man with a sword fights many other men. One man is hit repeatedly with a large book, one man's neck is broken, one man is shot repeatedly (we see blackened bullet holes in his shirt and chest but no blood and we watch the holes close up), and a man is run through with a sword. Many men are slashed and stabbed with swords. A man is beaten with a gun, men are knocked out and people shoot back and forth at each other, and one man fights with a sword while he is being shot at. Bombs detonate in a submerged submarine, it fills with water, and people are thrown around and fear the worst. A mechanical creature (either a robot or a man in a metal suit, it is not clear) blows out a flame setting much of a room ablaze and nearly scorching one man; another man is burned badly (we see his burned flesh). A female vampire climbs up a wall, followed by a swarm of bats that encircle men on a rooftop and throw them off. We watch a man contort and writhe after he drinks a potion that makes him grow large and vicious several times and we watch him writhe and contort as he shrinks back to human form when the potion wears off. A rocket is launched, it hits a building and causes an explosion. A tank crashes through the wall of a building, rolls down a street running down and crushing a man, it crashes through another wall into a bank where armed guards shoot at it, it continues to roll over desks, through walls and it blows a safe door off with a large gun. People in a car are shot at as they drive away and one man in the car shoots back. A car speeds through narrow roads as buildings crumble around it, it crashes through a wall, flips over, and crashes. A woman breaks a glass and cuts her finger (we see blood and she licks her finger). A woman is held with a knife to her throat, and a man threatens another man with a sword. A man talks about his son dying in his arms. A man orders other men to "kill them all, except one" and we hear gunfire in the background. A man shoves and punches a man out of a room, a man shoves a man a couple of times. Bombs begin to explode under the streets of Venice: buildings crumble, streets break apart, people run and scream. A hangar with dirigibles in it burns. A man wears a mask that covers his burned face but we can see the reddened and charred skin around one eye and on his chin. A woman has two bite marks on her neck. The Invisible Man drinks and we see the liquid passing through where the esophagus would be. A woman slaps a man in the face. A man speaks in a condescending manner to a woman several times.

MESSAGE - We cannot escape our past and we must face our demons. War is inevitable. 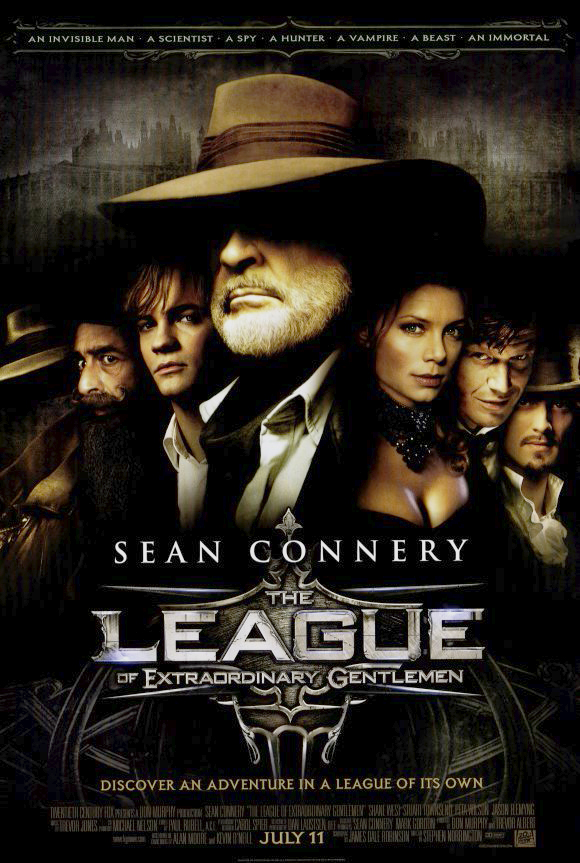