This time around, archaeologist and sleuth Lara Croft (Angelina Jolie) is in search of the treasures of Alexander the Great. She journeys to a recently discovered ancient temple that's underwater and finds a sphere that can lead her to the mythical Pandora's Box, only to have it stolen from her by the leader of a Chinese crime syndicate, who's in league with another treasure seeker (Ciaran Hinds) who wants to use the artifact as a doomsday weapon. Also with Gerard Butler, Chris Barrie and Djimon Hounsou. Directed by Jan De Bont. [1:58]

SEX/NUDITY 3 - A man and a woman kiss passionately, they lie back on the floor, she climbs on top of him and she kisses down his chest; also a man and a woman kiss. A woman walks through a prison, men pound on their cell doors, thrust their hips toward her and shout at her as she passes. A man and a woman flirt in a few scenes. A woman wears a bikini that reveals cleavage, bare abdomen and bare legs; also, a woman is wrapped in a towel that reveals cleavage and bare legs. A man takes off his shirt and is bare-chested. A woman wears a skin tight diving suit that accentuates her already peculiarly accentuated figure.

VIOLENCE/GORE 5 - Many armed men lower down from helicopters shooting at tribal people who are armed with spears; many men are shot, blood and other matter sprays and we see dead bodies on the ground. A man coughs and spits out blood and people watch as he sputters, gasps and blood pours from his mouth until he dies. A man tumbles into a pool of acid and we see him decomposing and hear him screaming. People come upon many dark and twisted tree trunks and branches: the trunks take form and turn into beasts with large teeth and claws that grab many men and drag them into the trees leaving a patch of blood on the outside of the tree, some men are thrown back and forth between the beasts, then slam-dunked into trees, and one man appears to have his head bitten off and his headless body is slammed into a tree. A man and a woman fight: the man has a spear that he swings at her repeatedly, then he uses a sword and she uses bamboo sticks to block him -- she throws the sticks at him and he's pinned to a wall (we see blood under his arms when he pulls himself free). A woman stabs a man in the foot with a bayonet, she holds him on the ground, slashes his leg, and he shoots at her, whereupon she throws a dagger that hits him in the chest and kills him. A man is stabbed in the back and another's throat is slit (we see the aggressor's hand slide across his throat and hear a slash). A man is shot and falls to the ground dead, and a man is sprayed in the eyes with a liquid that renders him temporarily blind and he's then stabbed in the back. A woman sits on a lighted sign shaped as a dragon that hangs from a cable and slides across the cable while shooting at a helicopter and many men that shoot back at her (several men are hit); she jumps from the dragon onto a sign that breaks free and she slides down to the ground. People shoot back and forth at each other in a laboratory causing a lot of glass breakage and many men are shot. A woman's face is ground into broken glass while a gun is pointed to her head (we see blood on her cheek and the table). A woman is shot at, has a slash on her leg and falls from considerable height into water. A man is punched in the stomach repeatedly, he fights with men until he and a woman are able to lower themselves by ropes while shooting at men along the way down. A man and woman fight with punches and shoving; the woman is shoved into a pointed rock on the wall and we see blood on her shirt, and the man shoots at the woman. A man and a woman climb and jump across rooftops, the woman pole vaults and catches the bottom of a helicopter, dangles for a moment, drops off and crashes through the tarp top of a truck below. A man and a woman are shot at while riding in a construction elevator on the outside of a tall building. A man and a woman are surrounded by men with guns drawn, they are knocked to the ground, the man is kicked and they are bound. A man is held at gunpoint, hit in the head with the gun and two others are punched and kicked until they fall unconscious. An aftershock causes water to pour into an undersea cave that topples columns (one appears to crush a man). A man and a woman fight with long sticks; the man is knocked to the ground and the woman holds the stick to his chest. A man punches a woman in the face knocking her to the ground. A plane skips along a body of water, knocking a man out of a boat, and it crashes into a mountain and breaks into pieces (its passengers eject and float down with parachutes). During an earthquake the earth shakes, people are tossed around, rocks fall, and a car tumbles over a ledge. A woman slices her arm with a knife, blood seeps out, a shark approaches and attacks, she punches the shark in the nose, and then holds on to its dorsal fin and rides up, toward the surface. A woman's hair burns when it dips into a pool of acid. A woman jumps through a glass door. A man threatens another man and his family, and a man shoots at the ground near a man's foot to threaten him. A shark lunges toward three people who dive deep in the sea. A submarine surfaces underneath a woman floating nearly unconscious in the sea. A man and a woman jump off the top of a high building, deploy flying suits, then parachutes, and land on the back of a ship in the sea. A woman parachutes and lands in the back of a jeep. A woman drives recklessly on a skidoo and does a flip through the air. A man and a woman drive recklessly on motorcycles; the woman jumps over a wall, she does a wheelie and her tire nearly touches the man's head. A woman twists a man's wrist and he falls to his knees. A woman takes target practice on horseback, shooting targets while riding. A pig's head and feet hang in a restaurant's window. Tribal people have ceremonial scarring on their faces and chests.

MESSAGE - Some things are not meant to be discovered, and shouldn't. 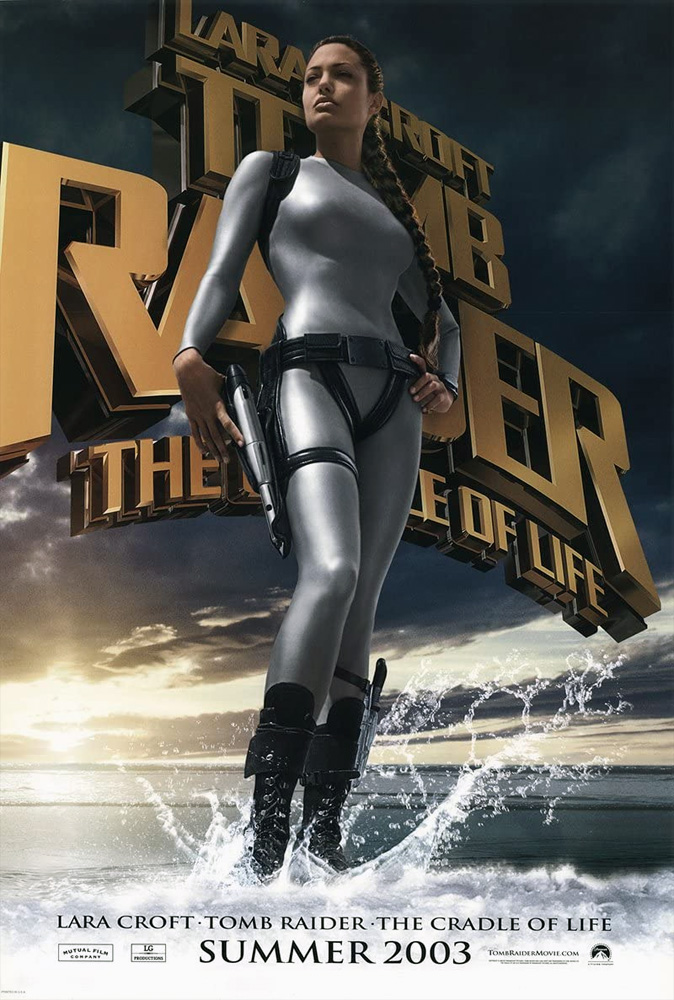