Anthony Anderson stars as Malcolm King, a conceited, buffoonish businessman who has made his fortune on a Viagra-like product. His personal life is falling apart as he's going through a very ugly divorce from his wife (Leila Arcieri), and afraid that she will take his fortune he hatches a scheme to have himself kidnapped. What he doesn't know is that there are others who have a similar idea, but are quite serious about it. Also with Jay Mohr, Donald Faison and Regina Hall. Directed by Jeff Byrd. [1:35]

SEX/NUDITY 6 - A woman drops her robe (we see her in a bra and panties from the back, and part of her buttocks are exposed), she goes into a darkened room looking for a man, and we hear rhythmic movement coming from the room and see that a lot of time has passed before she comes back out, looking disheveled. The man comes out of the room smoking a cigar, dances with sexual gestures, and has a satisfied look on his face.
► A woman parks her car with a valet, she asks him if he will "wax this real good" as she is bending over and wiggling her buttocks toward him (it is implied that she is referring to sex rather than a car wash); other men watch from a distance and make gestures toward the man.
► A man sits in a bathtub covered with bubbles (we see his bare chest), another man comes into the room, he asks how the water is and puts his hand in the water while making remarks that imply his interest in having sex with the man in the tub.
► Two women wear dresses that are low-cut in the front and back and have notches cut out of the sides that reveal cleavage, bare abdomen, bare back and shoulders, a woman's robe is open in the front revealing a low-cut negligee and cleavage, a woman wears a very low-cut top that reveals cleavage and a tattoo on one breast, women wear low-cut (some very low-cut) tops and dresses throughout the movie that reveal cleavage, bare shoulders and bare backs, and a woman is wrapped in a towel after coming out of the shower (we see cleavage and bare shoulders). A man is shown bare-chested in a couple of scenes, and a man lies on a sofa and realizes he has no pants on when he wakes up (we see his bare legs).
► A man says to his wife, "You gave me something that night," and she says, "It's always good to give you a little." A man sits in his office chair and moans (it sounds sexual), we see a woman's head pop up from under his desk, giving the impression that she was performing oral sex on him; then we see that she was actually rubbing his feet. A woman makes a veiled invitation to a man to have sex with her (she asks "Don't you have more work to do?" and then picks her leg up causing her skirt to fall open). A woman tries to entice a man to come to bed with her, she puts her foot on his shoulder while he sits at a desk and he kisses it. A man and a woman also kiss a few times.
► A man massages a woman's shoulders (his shirt hangs open revealing his bare chest and she wears a very low-cut top that reveals her bra and cleavage), she stands up in front of him, puts her foot against his chest and pushes him back (we see her bare thigh). A woman also massages a man's back while he lies in bed (both are clothed).
► A woman dances at her desk with gyrating, thrusting hips, she rubs her clothed buttocks and men on the other side of a window watch her with interest. A man watches as a woman walks away from him (she wiggles her hips as she walks).
► A man goes into a pawn shop and a woman asks him if he has another "tool" to show her (he has already pawned several tools), we hear a zipper unzip, hear a thump on the counter top and hear the woman scream (it is implied that he has shown her a part of his anatomy, but it is not clear).
► A woman is referred to as unintelligent and men ogle her in many scenes. A woman makes a remark about how fast sex was with her husband, a man makes a crude reference to three women needing a bikini wax, and a man talks about the size of a part of his anatomy in an effort to explain that he won't take grief from anyone.


VIOLENCE/GORE 4 - A man with a nail gun shoots toward a man (he misses), the man runs up a flight of stairs, and the other man pulls a stair mat causing the first man to fall back down the stairs and a woman to fall on top of him.
► Two men fight: one punches the other, slams him against a wall, kicks him several times, and slams him into bookshelves; the other man is thrown onto a table and tackled to the floor and held down, and they both fall onto a couch where an elderly woman sleeps. The woman hits one of the men on the head with a glass vase (it shatters), and one man saps the other in the face.
► A man tackles a man dressed in a hamburger suit, he punches him repeatedly and jumps on him repeatedly. A man punches a man in the face and stomach, squirts him in the face with ketchup and then punches him in the crotch.
► Police come into a house and hold guns on three people. A man jumps on the hood of a moving car, tumbles onto the ground and holds a gun on the driver when he comes to see if he is all right. A man holds a gun on a man and pushes him into a car. Three women hold guns on a man, force him into the trunk of a car, and then hold another man at gunpoint briefly. A woman in a car chases a man in a car and they are both chased by police, when they stop the police hold guns on them.
► An elderly woman jumps on a man pushing him into a chair, she punches him repeatedly and it sounds like she bites him (we hear crunching) and we see him later with a bloody and bruised nose and lip.
► A man gets into his car, he is grabbed around the throat by a woman in the backseat, she threatens him, tightens her grip (we hear crunching), and slaps him in the face and on the head twice. A man slaps a man in the face, a man slaps a man in the face with a piece of mustard-covered bread, a woman hits a man in the head, and a man hits a man in the head.
► A man in a car drives in front of a van, drops spikes on the street, the van has a blowout, it spins around and stops, a passenger falls onto the street when the door is opened (he has a bloody scratch on his head), and he is put into another car -- the driver shoots a nail gun at the tires of the van as it drives away.
► A man kicks a television over (sparks fly) and he hits a man in the head, and threatens the man and a woman with a hammer. A woman yells and throws a book into the air, a man yells at people and is very insulting in many scenes, and a man and a woman argue bitterly in several scenes.
► A man and a woman are tied to a chair for several scenes. A man wakes up with a start when he sees a threatening looking man sitting over him. A man walks through a prison yard and other prisoners appear afraid of him (he has a threatening expression).
► A woman shoves a police officer out of the way, and a woman threatens to hit a man on the head. We hear that a man's hot air balloon crashed and that he was attacked by a wild rhinoceros (he lived).
► A woman burps and a woman drools and flatulates while she sleeps. A woman confesses that she has flatulated and a man makes a remark about the odor.

MESSAGE - Being greedy and selfish doesn't get you what is really important. Don't let people push you around. 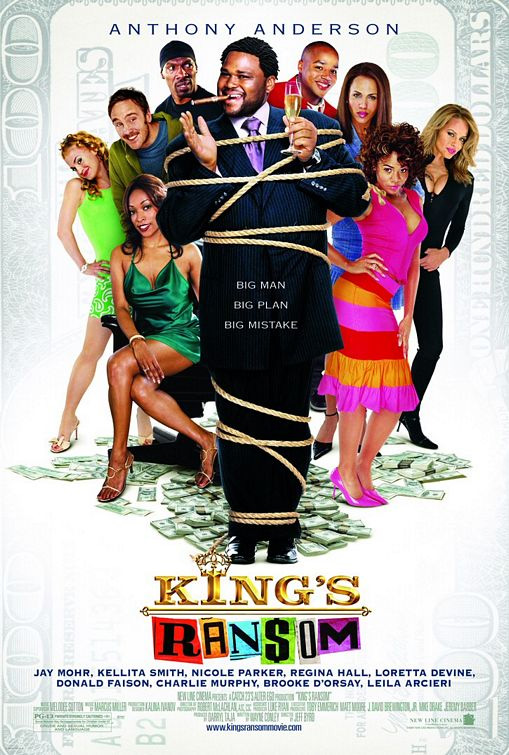