Jamie Foxx and Jennifer Garner star as members of an FBI counter-terrorism squad sent to investigate the aftermath of a bombing at a U.S. base in Riyadh, Saudi Arabia. However, Saudi authorities are resentful and suspicious of the Americans, and they find only one local ally, a Colonel (Ashraf Barhom) who helps them navigate the local culture and bureaucracy. Also with Chris Cooper, Jason Bateman, Ali Suliman and Jeremy Piven. Directed by Peter Berg. [1:50]

SEX/NUDITY 1 - A man puts on a rubber glove and asks another man if he "needs a little check."

VIOLENCE/GORE 8 - Two women are shot repeatedly by people in a car that's driving through a civilian housing camp; many other people are shot, women, children and men, and several are shot at point blank range.
► An emergency rescue team tries to help injured people after an attack, and there is a large explosion and many people are blown up.
► A man stands in a road, he calls people to come to him, they do and he detonates an explosive which he's wearing on his chest, blowing himself and many people up (we see bloody victims); a young boy is forced to watch the mayhem from a distance, through binoculars.
► A man is shot at close range and blood spurts; several other men are shot and a woman is thrown into a wall, but she bites a man and shoots another in the leg, she is thrown into another wall, she stabs a man in the crotch, then in the chest repeatedly, and in the eye (we see blood ooze and we hear squishing sounds).
► A boy shoots a man and a man shoots the boy in the chest (we see blood in the man's mouth).
► Two men in a car are shot, and blood spurts on the windshield. Four men are shot and blood spurts.
► A man drives a car into the back of another car, both explode, three other vehicles are thrown and they roll, and one man is dragged from the wreckage and taken away by men with guns (people shoot back and forth at each other and a car chase ensues).
► A man is beaten with a nightstick during an interrogation (we see his bloody face and hear cracks with each blow).
► We see several dead bodies lying on the ground, their bloody wounds are visible and blood and other matter is on the nearby walls. We see a man with a very bloody abdominal wound taken somewhere for medical attention. We see dead bodies on morgue tables with visible wounds, and shrapnel is pulled from wounds (there's blood and squishing sounds).
► A kidnapped man is held and filmed while another man holds a machete to his throat; he is punched repeatedly and he struggles to get away, and then the man with the machete is incapacitated.
► A man is taken hostage and is beaten repeatedly by his captors, he is gagged and dragged by his feet into a room, he grabs onto a door, his fingers are struck with a gun, and he yells through his gag.
► Rockets are fired and grenades are thrown at vehicles and gunfire erupts outside a building where a man is being held.
► Two men fight, another person fires a big gun into the air and a woman who stood nearby complains of having her "eardrum blown out."
► A man in a truck aims his gun at another truck approaching him (he does not fire). Police with guns surround a house.
► At the scene of an explosion we see a bombed out building, a car stuck in the foundation of a building, a lot of rubble and a large crater.
► Several men prepare a vehicle with explosives for a suicide bomber. Several people, including a young boy, build bomb vests. A man is shown to be missing two fingers on one hand, and we are told that he is a bomb maker and that is how he lost his fingers.
► A man and a boy die from their wounds, and people are shown grieving. A man yells at a man. A man yells at a woman when she reaches to touch dead bodies during an examination (women may not touch a Muslim dead body).
► A man talks about his children trying to help his fatally injured wife by using band-aids to reattached her mouth, which was apparently blown off during an explosion. A woman talks about people being killed and about a woman being murdered while her children watched. A man talks to an elementary school class about the day his son was born by C-Section and that the doctor used a little knife to cut a hole in the mom's belly button and pulled the baby out. A man puts on a rubber glove and asks another man if he "needs a little check." We are told that a dinner party at a prince's palace is for "men only."
► Several people are shown playing video games of men shooting soldiers.

SUBSTANCE USE - A man smokes a cigarette.

MESSAGE - Life is finite, and revenge comes at a great price. 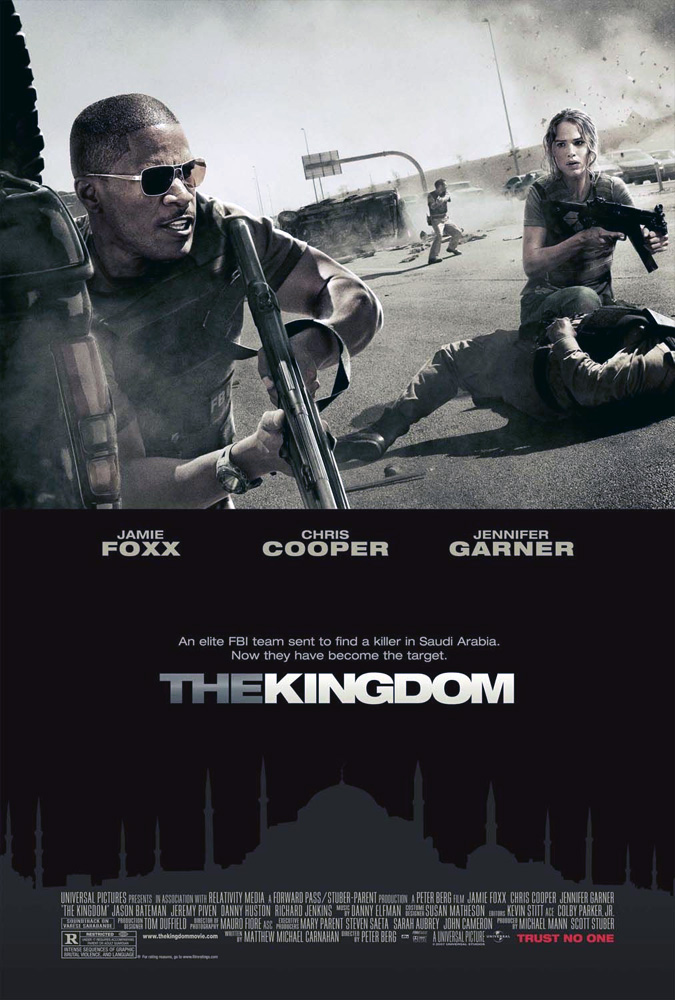