A boy (Jaden Smith) and his mother (Taraji P. Henson) are relocated to China and their new life has a rocky start when the boy is plagued by local bullies who are into kung fu. Determined to overcome fear, and with the help of an apartment maintenance man (Jackie Chan), he trains for a kung fu tournament where he will face the very boys who bullied him. Also with Han Wen Wen and Yu Rong-Guang. Directed by Harald Zwart. [2:06]

VIOLENCE/GORE 4 - A pre-teen boy yells at a pre-teen girl, another boy tries to intervene, the first boy knocks papers out of his hand, pushes him to the ground, and the two boys fight: the second boy is tripped and lands hard on the ground, he is then flipped and lands hard on the ground again and he is struck in the chest and kicked in the stomach; he manages to punch the first boy in the face, but he's thrown to the ground again and the first boy straddles him and punches him in the face (we see his black eye and bruised ribs later).
► There are numerous fight sequences during a Kung Fu tournament and we see pre-teen boys being thrown, punched and kicked and several fall to the mat hard and moan: One boy is carried off the mat and appears injured (there's no blood), one boy is punched in the leg repeatedly and we see a very large bruise, one boy is kicked twice in the leg and cannot get back up (we hear a crack, the boy yells in pain and it is implied that his leg is broken), a boy is shown having his chest bandaged after a hard blow, a boy is thrown to the mat and elbowed hard in the chest, and a boy is shoved out of the ring and lands hard on his back on the floor (he gets up and he's OK).
► A pre-teen boy throws a bucket of dirty water on several boys, they chase him through streets and over rooftops and eventually trap him and throw him on the ground; two of the boys hold him and another one punches him in the stomach repeatedly, and then kicks him until a man stops him.
► A man fights with several pre-teen boys: they punch and kick and several of the boys are knocked to the ground but seem relatively unscathed. A kung fu instructor slaps a pre-teen boy hard in the face. A man flings a toothpaste cap at a boy and it hits him on the neck.
► Two boys punch and kick each other during a training session and when one boy is thrown to the mat the other reluctantly punches him hard in the face. A pre-teen boy and a man practice martial arts in numerous scenes, with punches and kicks.
► A pre-teen boy and a man are tethered to opposite ends of bamboo poles, they move simultaneously and at one point the man pushes hard and the boy nearly falls off a pier and into water. A man serves ping pong balls powerfully and a boy is struck repeatedly (the boy yells and complains).
► Several bullies surround a pre-teen boy, take away his backpack, empty it on the floor and threaten him. A pre-teen boy hits a food tray out of another boy's hands, the second boy shoves him and they are separated by a teacher (we see one boy with food stains on his shirt).
► We watch a woman standing on a very high ledge, moving very purposefully and posing while face-to-face with a cobra. At a market, we see live scorpions on a bowl and then other scorpions on skewers being sold for food. A man takes a dead fly off a fly swatter with chopsticks, he wipes them off, and continues to use them.
► A man is shown performing a Chinese healing technique that involves lighting a cotton swab coated with something flammable, placing the flaming cotton inside a glass, placing the glass on the flesh where there is an injury, and then holding some of the flames in his hands and rubbing it on the chest and abdomen of the boy (the boy moans slightly, but is then pain free).
► A man (he's thought to be drunk and distraught) hits a car with a sledgehammer and we see the hood and windshield shattered and dented.
► A Kung Fu instructor tells a pre-teen boy, "Break his leg," and tells another boy, "I don't want him beaten, I want him broken." A man talks about his wife and son being killed in a car accident and that he was driving. We understand that a boy's father died. A mother yells at her pre-teen son in a few scenes. A pre-teen boy yells at his mother in a couple of scenes. A boy makes faces at and is disrespectful to his mother in a few scenes. A pre-teen girl tells a pre-teen boy that they can no longer be friends and that he is bad for her life. A boy tells a girl that eating while standing up will "give you gas."
► A pre-teen boy hides when he sees several bullies approaching him in a school hallway. A boy is nervous about attending a new school.

SUBSTANCE USE - A man is shown to be apparently drunk and we see a partly empty bottle of alcohol.

MESSAGE - If you do your best, it doesn't matter whether you win or lose. 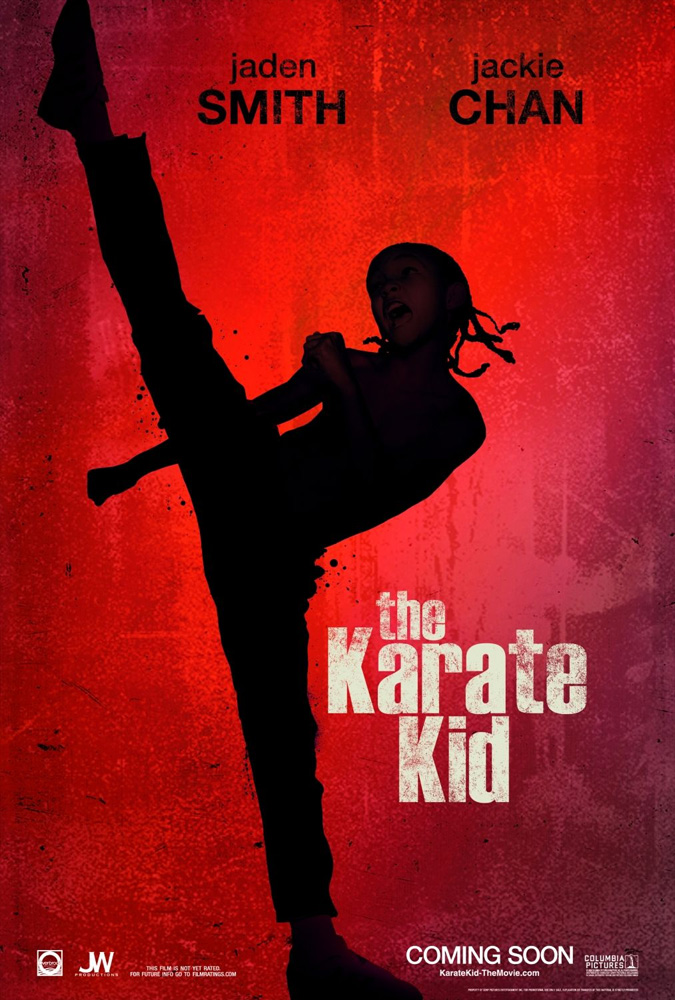