A 12th Century medieval nobleman and his servant are transported by a magic potion to modern-day Chicago. They must find a wizard to send them back in order to save his bride-to-be. With Jean Reno, Christian Clavier, Christina Applegate, Malcolm McDowell and Tara Reid. [1:28]

SEX/NUDITY 2 - A woman in a very tight, cleavage-revealing sweater and skirt with a thigh-high slit slinks seductively across a marble top desk toward a man. Some cleavage is seen in tightly laced medieval gowns and a black negligee. Three male models are shirtless or open-shirted while they show the latest fashions in a boutique. A woman in a bar exposes very extensive cleavage and a woman wears a midriff-revealing top. There is a scene with suggestive dancing in a dance club. A couple of near kisses and one kiss. Men kiss women's feet a couple of times, once at knife point. Men kiss women's hands.

VIOLENCE/GORE 4 - A woman is stabbed and dies. A knight arrives at the hut of a witch who is poised over a cauldron of smoldering goo reciting a spell. We see a skull pop up out of the cauldron covered in goo, and a small serpent comes out cooing and then turns into a huge griffin that blows fire at a man and burns his hair and chars his face. A woman is attacked by marauders and a man fights to defend her with punching and swordplay. Police are shown beating two men brutally with clubs (we don't see the blows land, but we see the repeated swinging). A purse snatcher is tackled by a man who draws his sword and threatens to cut off his hand. We see a man's body parts strewn around a room (they appear to be metal) and when he orders them to do so the pieces come back together. A man threatens a man with a pool cue and the other man proceeds to hack it in half with his sword. A man hits a woman in the face and knocks her back into a chair. A man grabs a man by the throat and tosses him down. There is a huge explosion leaving behind only the smoldering boots and hat of a wizard. A woman threatens a man with a sword then sheaths it and hits him in the groin. Two men throw policemen off their horses. A man shoves a woman and she falls back onto some bags of peat moss. A man threatens a man with a knife and forces him to kiss a woman's feet. A man on horseback crashes through a plate glass window, and a man falls out a window (we hear him scream but do not see him land). A man drinks a potion, grimaces, writhes in pain and begins hallucinating that the people around him are grotesque demons with snakes slithering from their mouths and exploding heads. Two men drink a potion, writhe around, change form, bounce around, turn into stone and disappear, and another time they shatter like glass and disappear. Another man takes a potion and we see him upon his arrival bubbling up from a puddle until he's whole again. And yet another man drinks a potion, develops holes in his face, disappears and wakes up face down in a mud puddle and is dragged off by the ear by the police. Two men wake up smoldering and startle a group of children in a museum who run off screaming. There is a discussion about re-animating a dead person's body. A woman practices swordfighting on a refrigerator and a mattress and garbage bags. There are a lot of pratfalls, fish-out-of-water and gross-out gags: A man knocks his head on a doorway, a man is kicked off the back of a wagon, a man is knocked in the head with a shield, servants sitting on the floor fight over meat bones and table scraps tossed to them by their masters, men demonstrate really bad table manners, two men scream as an elevator begins to move, two men attack and destroy a car with swords, thinking it's a dragon, a woman rolls off a desk and lands on the floor, two men are terrified by the noise and motion of the city, men get car sick (one vomits in a briefcase), a man slips on an ice cube and falls hard, a woman is sprayed with a green health drink concoction, men bathe in a toilet, and then in bathroom cleaner, a man drinks perfume, a man in a men's room smells and eats a urinal deodorizing tablet, and then shares with his friends (one of whom spits her's in her purse), a man skewers a chicken with an umbrella, men attack a TV with knives, trying to free the little people inside but instead blowing it up, and there's repeated flatulence and burping.

MESSAGE - Stand up for what you are and what you believe in. 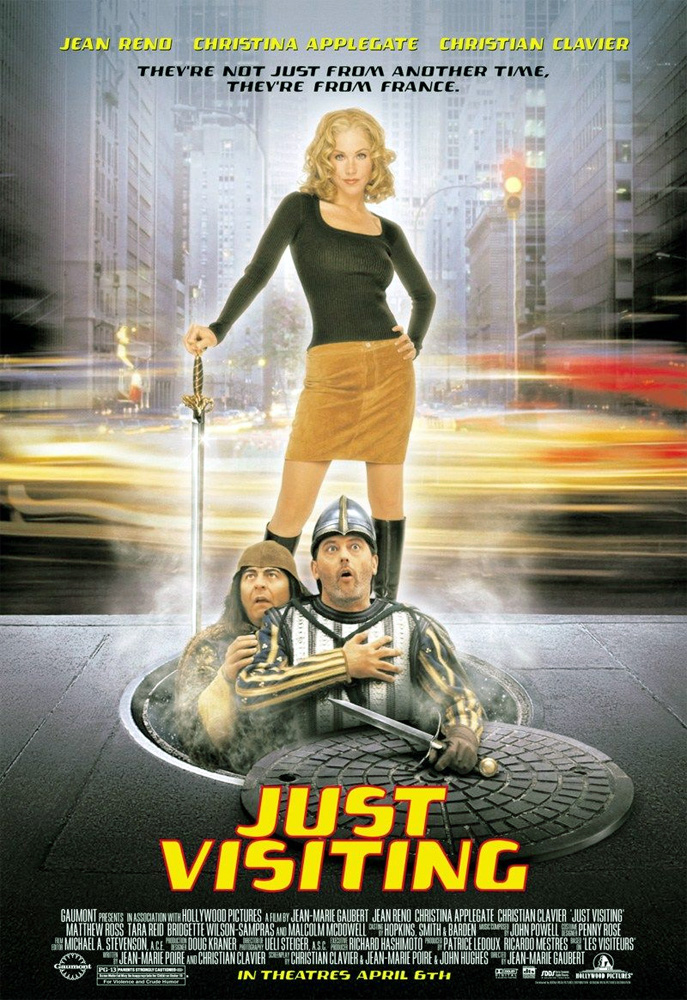