Sam Neill reprises his role from the first "Jurassic Park" film as a paleontologist who's willing to continue studying live dinosaurs despite an almost lethal and very close encounter. Desperate to fund research for a new theory about velociraptor intelligence, he accepts an invitation to a dinosaur island he's never visited before. Marooned with his group, they encounter pterodactyls and other new and quite deadly species of the revived reptiles and the opportunity arises for several disposable characters to get chewed up in sundry ways. Also with William H. Macy, Tea Leoni, Alessandro Nivola, Michael Jeter, Laura Dern, Trevor Morgan, Bruce A. Young, Mark Harelik and John Diehl. [1:32]

SEX/NUDITY 1 - Mild flirting: a couple tells each other they look good, a man helps a woman uncover a fossil by holding her hand and directing her to caress the fossil, a couple change clothes and we see the top part of his bare chest, the top part of her bra and her bra from the back.

VIOLENCE/GORE 8 - There are many scenes of dinosaur attacks: a dinosaur stomps on the back of a man and dig its claw into his back and the man dies with a gurgling cry and blood on his back; a dinosaur rips the face off of a corpse (this is not clearly seen), a man is grabbed by a flying dinosaur (a pterodactyl) and his top half dangles from its mouth as he screams, a man is pulled out of a plane and dropped and then picked up and eaten (we know this by seeing the dinosaur's bloody mouth), a flying dinosaur snatches a boy, flies away and drops him into its nest where baby dinos peck, attack and chase him as he stumbles and nearly falls off the hill where the nest is perched (we see blood on his face, neck and arm). A man falls into some water where flying dinosaurs chase him and one snatches him up, he falls back in, and then a few of them attack him repeatedly by biting his back as he tries to swim away. A man's blood splatters on a plane's windshield. A dinosaur attacks a group of people on a boat knocking them into the water and trying to eat them. A man hangs from a crane as a dinosaur tries to leap up and eat him. We see a dinosaur devouring another dinosaur and it has a bloody mouth, teeth and pieces of flesh are dangling from it. Two dinosaurs fight with snapping sounds, bellowing, crashing and falling, and biting each other's necks until one falls down dead with a thud and we see its bloody mouth. We see slashed sails and a smear of blood on the deck of a deserted boat. People are chased and threatened by dinosaurs: A dinosaur jumps out at a woman and almost reaches her, a woman is snapped at by two dinosaurs as they leap up trying to grab her out of a tree, some dinosaurs surround a man but are scared off by gas canisters, a dinosaur rocks a plane (which is hung up in a tree) and tears the front of it off to get at the passengers, a plane falls many feet (from a tree) with people inside and the dinosaur then rocks the plane and dips his snout inside to try to eat them. A group of people is surrounded by dinosaurs and one sniffs a woman's face. A group of people is chased and cornered in two cages and the dinosaur tries to climb in after them, a dinosaur chases a group of people, crashes through a gate and pounds on a locked door to try to reach them. A group of dinosaurs chase people who run into a herd of large dinosaurs causing a stampede and the people are nearly trampled. A man talks about dinosaurs ripping the guts out of a toddler while demonstrating with plastic dinos. A decayed corpse hanging in a tree swings out unexpectedly and hits a woman as she screams and writhes to get away. A man flying a parasail crashes into a cliff-side and dangles while being threatened by a dinosaur. A corpse appears to move and a woman nearly falls from a tree trying to rescue it. A man hits another man on the head with a gun (offscreen) and we hear a thud and the screen goes black. A group of people fall into water when a bridge collapses, and a deserted boat crashes onto some rocks (a man and boy on a parasail are attached to it but manage to break free before the crash). A man dreams of a dinosaur head talking to him. A man is shown with a bloody arm, apparently after a dinosaur attack. Throughout the film people have bloody cuts, bruises and scratches on their faces, necks and arms, there's blood on a man's forehead, blood on a man's elbow, a bloody spot on a man's bald spot, there are bloody scrapes on a boy's knees and blood on a man's hand, blood on a man's shoulder seen through a torn shirt, bloody scratches on a boy's cheek and nose, and a man has bloody bandages on his head and neck and a bandage covering his torso. People dig through dinosaur dung and pull out a couple of what appear to be human bones. We see hanging dinosaur fetuses in containers of chemical solution. A flare ignites some water and some flames are seen on a dinosaur. An unoccupied plane is blown up with a grenade launcher. A group of people hear a dinosaur bellowing and begin running away while leaving one of their group behind. A man nearly falls down a cliff when a stairway breaks and a bridge creaks as people walk along it. A boy is rescued by a man on a parasail and the boy is dropped into some water. The bellowing dinosaurs cause people to scream and scramble in fear. Claws slash through the movie's opening credits. 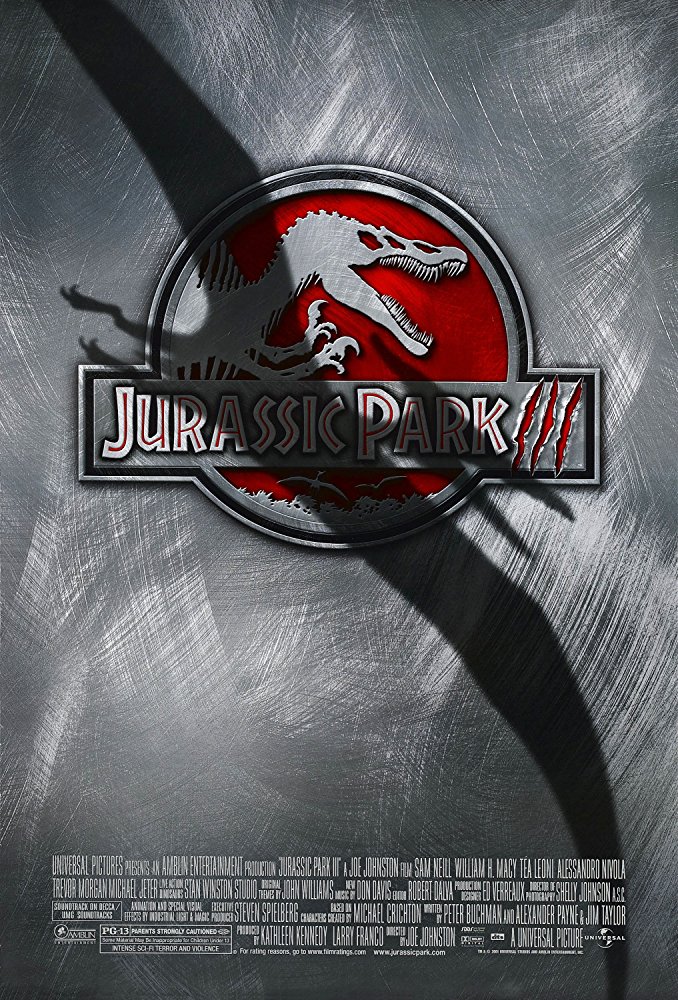