Why is “It Chapter 2” rated R? The MPAA rating has been assigned for “disturbing violent content and bloody images throughout, pervasive language, and some crude sexual material.” The Kids-In-Mind.com evaluation includes full male and female nudity without obvious genital detail, an implied sex scene, a possible implied sexual abuse instance, a few kisses, and several cleavage revealing outfits; many scenes of a menacing clown with a long tongue and a large mouth full of sharp teeth that threatens and kills people in bloody and gory ways, many large creatures that threaten and chase people, and many scenes of flashbacks to frightening events in the lives of several teenagers; and over 100 F-words and other strong language. Read our parents’ guide below for details on sexual content, violence & strong language.” Sequel to 2017’s It, based on Stephen King’s novel: When violent acts begin in a small town, a man (Isaiah Mustafa) remembers that similar events happened when he was younger. He contacts his old group of friends, all of whom have moved away and have forgotten many of the details. Nevertheless, they do gather again to track down the menace and destroy it for good. Also with Jessica Chastain, James McAvoy, Bill Hader, Jay Ryan, James Ransone, Andy Bean, Bill Skarsgård, Jaeden Martell, Wyatt Oleff, Jack Dylan Grazer, Finn Wolfhard, Sophia Lillis, Chosen Jacobs and Jeremy Ray Taylor. Directed by Andy Muschietti. [Running Time: 2:50]

– A fully nude female creature charges into a room and we see her bare breasts, abdomen and legs without obvious genital detail (please see the Violence/Gore category); we see this creature in the same state in a later scene also. A fully nude man steps into a bathtub and we see his bare back, buttocks and legs — his genital area is in heavy shadow. A fully nude woman walks in the background of a scene and we see her side buttock and side as she moves behind a wall. A woman wears a low-cut dress that reveals cleavage on a movie set. A skeletal creature appears to have a pronounced pubic bone. A teen boy’s bare abdomen is shown when others carve letters into his flesh. A man’s bare abdomen is shown when he lifts his shirt as letters are carved into his flesh. A woman wears a low-cut dress that reveals cleavage and her bare legs to the upper thighs while seated.
► A man and woman kiss while under water. Two men embrace and kiss twice (please see the Violence/Gore category for more details). A wife kisses her husband on the cheek. A teen boy leans toward a teen girl to kiss her (please see the Violence/Gore category for more details).
► A man and a woman fall back on the ground and the man lies on top of the woman briefly. A teen girl hugs her father after he sprays them both with her dead mother’s perfume and he asks if she will always be “Daddy’s girl,” (it’s not clear if a sexual abuse situation is implied).
► A man onstage starts to tell a joke about his girlfriend finding him masturbating to her best friend’s Facebook photo. A man asks how a woman how she slept and it is implied that they slept together. A man tells another man, “You’re hot.” A woman finds a postcard with a love poem addressed to her from a “secret admirer.” A teen boy is rebuffed by another boy and the second boy calls him names in front of others (implying that the first boy is gay). A teen girl tells a teen boy that her father told her that the boy has a tumor on his genitals. A man makes a joking reference to having sex with another man’s mother. A woman remarks about remembering seeing several teen boys in their “tidy whiteys.”

It Chapter 2 SUBSTANCE USE

– A man takes an unidentified pill from a prescription vial, a man uses an inhaler in several scenes, a man drinks water laced with a “root” that causes him to hallucinate, a newspaper headline reads “2 Crackheads Dead,” and people in a hallucination are shown smoking something unidentified. A man drinks a short glass of bourbon, a woman drinks from a glass of wine at home, and several people drink beer and shots of liquor in a restaurant. A teen boy smokes a cigarette, a teen girl smokes a cigarette outside and in a classroom, and a woman smokes a cigarette in a parking lot. 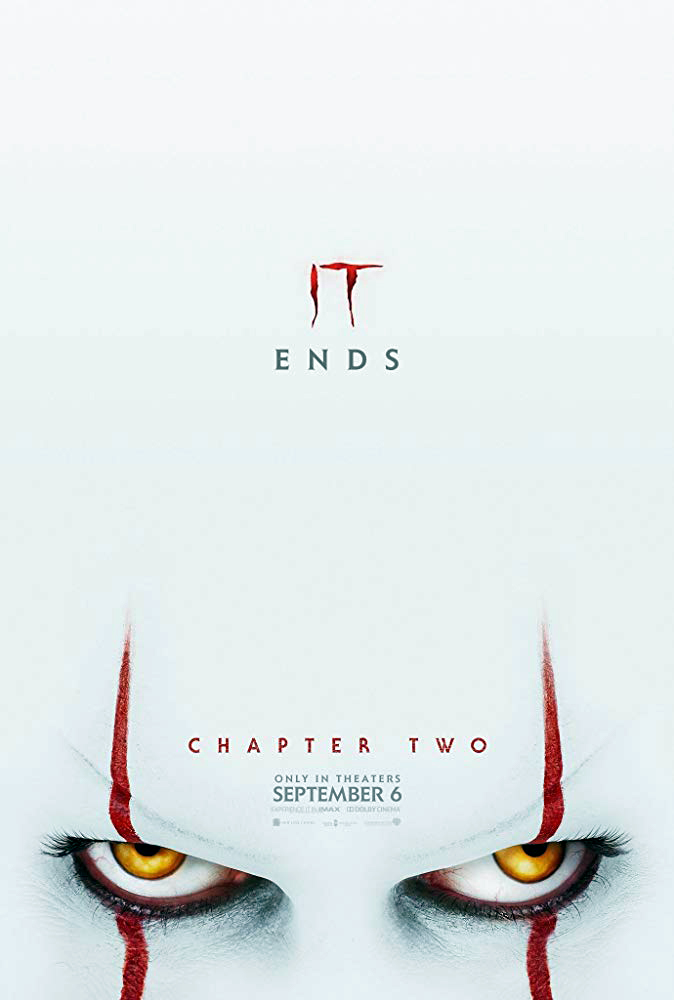