Based on the popular Thomas Rockwell book: An 11-year-old boy dreads his first day at a new school, and as he suspects, the local bullies pick on him all day. To prove himself and earn respect from his new classmates, he makes a bet that he can eat 10 worms without throwing up. But he has a sensitive stomach, and so he is sure that he will lose the bet especially when he sees how the bullies are "preparing" them. With Luke Benward, Adam Hicks, Hallie Kate Eisenberg, Austin Rogers, Ty Panitz and Kimberly Williams. Directed by Bob Dolman. [1:38]

SEX/NUDITY 1 - A woman wears a low-cut top that reveals cleavage, and an animated boy is shown wearing only jockey shorts.
► A boy makes a remark about a "pig licking himself."

VIOLENCE/GORE 3 - Boys break into the shack of a woman whom they say is suspected of being a witch, she returns and catches them, she yells, chases them and swings a bag around hitting a couple of the boys (the boys also say that the bag holds a severed head).
► A boy describes the effects of being punched by a boy wearing a "death ring" and says that you will bleed to death and die by the 8th grade (we see an animated illustration of the process where a boy develops a sore, it grows, it fills his body with blood and falls off leaving a skeleton).
► A boy shoves another boy to the ground. A boy thrusts a blowfish on the end of a stick toward another boy's face (he falls back and onto the ground). A boy's older brother bullies him by calling him a joke in several scenes and he smears jelly from bread on his cheeks in one scene. A boy is spun very fast on a park ride by several other boys who are trying to make him nauseous. Several boys on bikes chase another boy on a bike and call him names. Several boys stare at another boy trying to intimidate him.
► A boy kicks a backpack filled with canned food and hurts his foot. A boy crashes his bike into a bush, and falls off the bike. A man is struck several times by tennis balls, and a woman accidentally strikes a man with a tennis racket.
► A boy puts an earthworm in his mouth, chews, and then vomits (we hear gagging). A boy drops a live worm into a pan with hot lard, the worm sizzles and oozes, another boy pierces it with a fork, it squirts liquid on another boy's glasses and one of the boys eats the worm. A boy smashes a worm using a rolling pin, then scrapes off the goo and spreads it on a sandwich with peanut butter (another boy eats the sandwich). A boy eats two worms cooked together in liver juice, and some juice dribbles on his face. A boy grinds up a green worm in a blender, another boy eats the slop, and it pours out and onto the boy's face (we hear squishing). A boy eats a worm prepared with very spicy sauce and another boy sprays him with a garden hose trying to give him a drink (the boy being sprayed is knocked down). A boy eats a worm covered with a marshmallow sauce. A boy prepares an omelet with a worm in it and he and other boys watch a man eat it. A worm explodes in a microwave and a boy scrapes the goo off and eats it.
► A boy opens his thermos and pours out a clump of wriggling worms (we hear a squishing sound). A boy squeezes a toothpaste tube and worms wriggle out onto his toothbrush (he imagines this). A boy scoops a pile of wriggling worms into his lap to avoid getting into trouble (we hear squishing sounds).
► A boy throws a worm across a cafeteria and it lands on another boy's face. Several boys crowd around another boy, throw gummy worms at him and call him names. We see many wriggling worms being put into a boy's pants, and the boy walks through a school hallway twitching and reacting to the sensation while other children watch.
► A boy vomits behind a tree (we see him lurching and hear gagging). An animated boy vomits several times (his face turns green and we hear a loud horn blare each time). Several boys make a huge mess in another boy's kitchen. A boy drools, trying to hit ants on the ground. A boy picks his nose.
► Three boys break an arcade game by spilling a soda on it, then one falls back into a store display knocking the items to the floor, and they are all chased out of the store.
► Boys look at a diagram of the internal organs of an earthworm and discuss its sphincter with interest.
► A bird pulls a worm out of the ground, stretches it, snaps it up and eats it. An animated sequence shows a turtle in a road, a car approaches it and it is implied that the car runs over the turtle, leaving it spinning on the road. A boy spills bird feed on his head.
► A boy says there are dead fish corpses hanging from the ceiling of a shack. A boy wishes that his older brother was dead.

SUBSTANCE USE - A man drinks wine. There is ample earthworm consumption. 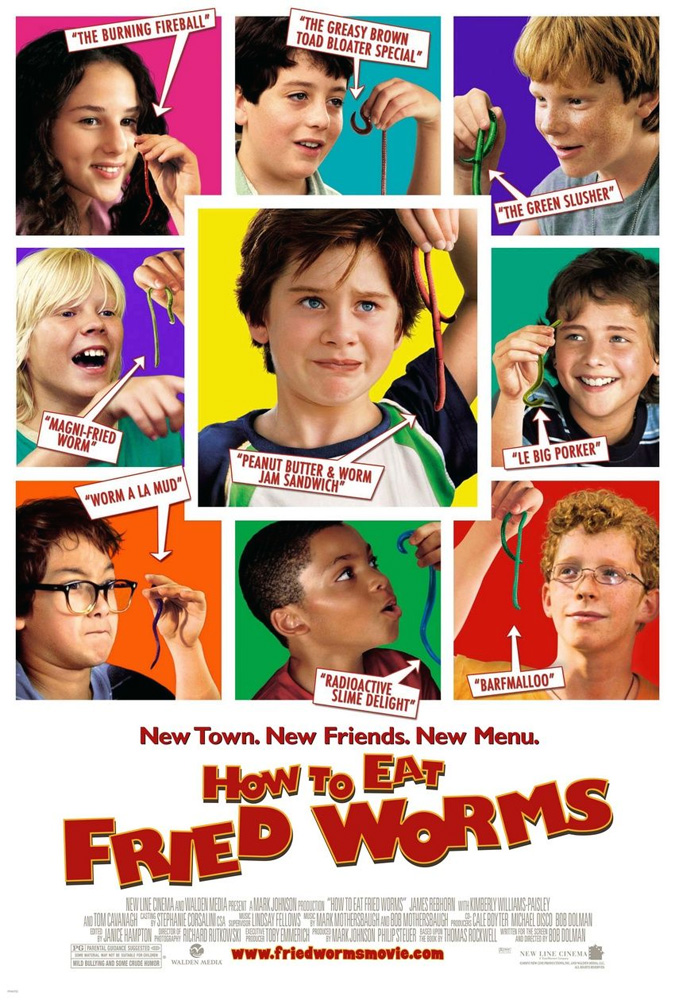