A man and a woman (Marlon Wayans and Essence Atkins) move into their dream house and the woman begins to act strangely. The man suspects she is possessed by a demon but determined to keep his sex life active no matter what, he brings experts to exorcise her, including a prison priest (Cedric the Entertainer), a psychic (Nick Swardson), and a team of urban ghost-busters. Also with David Koechner and Dave Sheridan. Directed by Michael Tiddes. [1:25]

VIOLENCE/GORE 6 - A woman drives into a driveway and over a dog, killing it (no blood is shown); the owner, a man, cries, he tries to revive it with CPR and car jumper cables, and the camera cuts to the cemetery with a tombstone for the dog and the man crying (several nights later, the woman drags the dog's body across the kitchen floor on a leash).
► A man argues loudly with his housekeeper several times about chores and she quits after several days; when she comes back to pick up her paycheck, a priest in the house sees her in the dark kitchen and mistaking her for a possessed woman, shoots her three times (we see three bloody wounds in her shoulder and chest but she survives).
► A woman with a large black spot on her shirt enters a room, stares into the camera in a close-up and distorts her face into a pale, gape-mouthed vampire face with black lips and huge fangs, charging forward, roaring and then disappearing; she reappears at the door, drags a man out into the hallway and slams the bedroom door. A woman walks out of her bedroom and downstairs where she screams and makes noises with pots and pans; her boyfriend follows, but is knocked down by an invisible being and dragged out of the room, and then dragged back into the room on his face.
► A priest takes out a large switchblade and plays tic-tac-toe off screen on a woman's arm, drawing blood; her arm is seen already red with x-marks from self-cutting.
► In a flashback an invisible friend throws a little girl's birthday cake into the camera; in retaliation a man spanks his daughter's clothed bottom with a leather belt three time while she cries and his wife tells him not to hurt his belt.
► In a dark basement, four men approach a possessed, wild-haired woman who is crying with her back to the camera; they beat her with punches and kicks, and they hit her with a ball bat, a bicycle, and odds and ends of wood, but she is unharmed. After putting baby powder on a hall floor to track an invisible being, a man finds huge footprints and takes a ball bat into a room where they lead; he beats someone there in the dark and the lights come up to reveal a woman moaning and disheveled but unwounded. A woman in a kitchen walks up to a second woman sitting at the kitchen table and slaps her in the face for not bagging drugs correctly (please see the Substance Use category for more details).
► A man and a woman on a home video tape continually experience unseen forces pulling them out of bed at night. A poltergeist throws dishes across a kitchen, pulls pots down from an overhead rack and forces all the kitchen drawers to open at once. A woman is pulled down a staircase, into the air and into another room, where she drops to the floor unharmed. Three ghost busters are struck by furniture dropping from the ceiling and they scream and run out of the house. A woman and three friends use a Ouija board to contact an invisible being and make it angry because of bad spelling and the board flies across the room.
► A man demolishes his living room one night by falling into a glass coffee table, spilling a funeral urn filled with ashes and tipping over lamps and chairs; we see him squat with his trousers pulled partially down and revealing one buttock as he grunts and then we see a pile of feces. The hallway and staircase leading to a basement are covered with blood drawings of evil symbols, including pentagrams, witch faces, winged monkeys, unreadable words, smiling circle faces and others; in the basement, a man stands facing a corner and another man says he is urinating, although we hear no sound. In a kitchen, a woman holds a large cutting knife as she eats everything in a refrigerator, including raw hamburger and she pours half a gallon of milk over herself. A priest tosses cologne onto a demon-possessed woman, who begins to let off smoke as if struck by Holy Water. A woman takes a large sword to bed for protection against ghosts.
► A man and a woman argue about strange occurrences in their house. A man and a woman argue about her flatulating in bed and sitting on the toilet too long; we see her in the bathroom on the toilet, covered by a nightgown, while her boyfriend says the bathroom stinks. A woman admits to friends that she sold her soul to the devil in order to get a pair of expensive shoes. A priest mentions a dozen times that he knows how to "shank" (stab) people because he learned it in prison. A man and a woman yell at an invisible being to leave the house. Three ghost-busters arrive at a house and yell at invisible beings that they cannot see. After the final credits, additional footage features one man telling another man that 90% of penises do not carry guns.
► A woman shows tattoo lines inside her lower lip and a priest shows a butterfly tattoo above his tailbone. A woman shows a priest a painting of a man with red paint on his head and face, representing blood. A woman's face is pale, her lips blue and her hair is wild.
► A sleeping woman in bed with a man flatulates six times, raising the sheet and comforter high into the air. A man flatulates on a stuffed animal.

SUBSTANCE USE - Three women sit at a kitchen table while bagging small bags of a powdered drug (please see the Sex/Nudity category for more details), a security man says that having a bag of meth is scary (we see no drugs), a man complains that Viagra and Cialis do not work well enough for him (please see the Sex/Nudity category for more details), a man and a woman share a large marijuana cigarette together and with an invisible being and its lungs fill up with smoke, a priest opens his Bible to show that it is hollow and contains a large marijuana cigarette and loose marijuana, and a priest pulls out cocaine powder in a silver case and dispenses it into men's hands in a home and we see the men snort it and jump around briefly. Parents film themselves at their young daughter's birthday party while drinking whiskey, a woman holds bottle of colorless liquor, a woman tells friends that she and a girlfriend got drunk in college and kissed, a drunk man demolishes his living room (please see the Violence/Gore category for more details), empty beer bottles sit on tables in a house and around a swimming people in several scenes (no one is shown drinking), and a woman holds a bottle of wine and two empty glasses.

MESSAGE - Don't let your girlfriend move into your house. 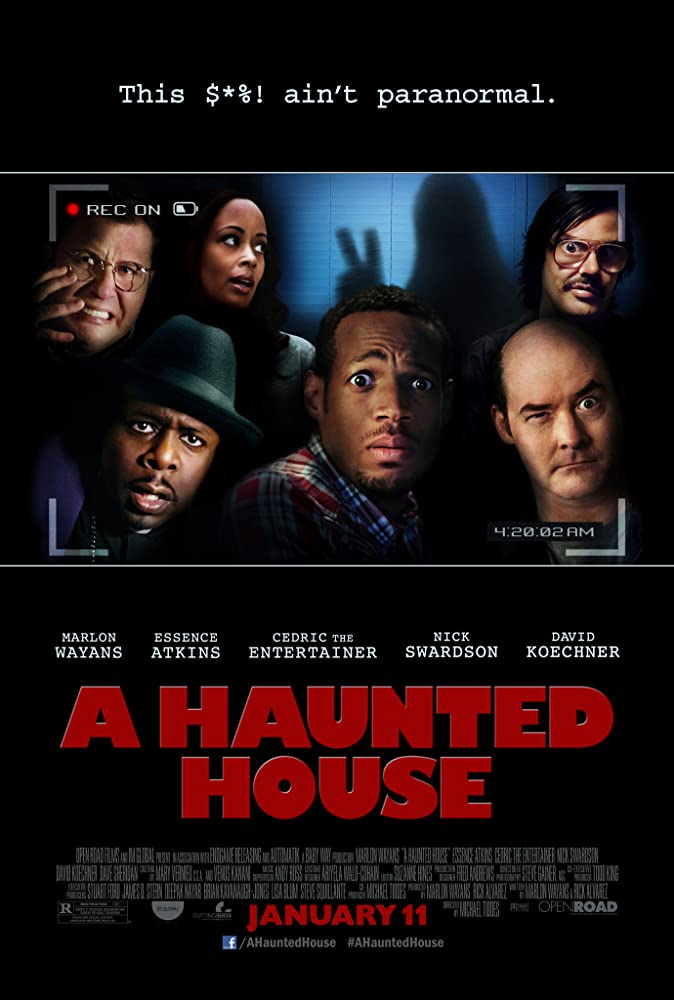