SEX/NUDITY 1 - We hear about a man who loved a woman deeply, but that she was married to another man. A man writes a letter to a woman confessing his love for her. A woman is arrested, a man interrogates her and caresses her arms.

VIOLENCE/GORE 7 - Many men are shoved into an air raid bunker, barrels of gasoline are rolled into the bunker, and set on fire; we hear men screaming, we see men in flames trying to push their way out, and those who do are shot.
► Armed soldiers come into a hospital, round up many nurses, force one to identify several of the nurses, they are shown on their knees and they are shot one by one (blood splatters and they fall over onto the ground).
► Many men are gathered in a prison yard, one is hit with a stick, another is dragged off a truck, and 10 men are selected from the group and they are then shot one by one -- blood splatters, we see them slump to the ground and we see gaping holes in their necks and blood on their shirts.
► A man has a very bloody mortar wound in his abdomen: we see him on an operating table, he grunts as the shrapnel is removed, and we see more blood on the wound and the surgeon's gloves.
► A man is dragged by the arms, tied to a pole and whipped with a stick repeatedly; he's then left hanging by one arm until he dies. A man is stabbed through the arm with a bayonet, and held by the throat; he gets a gun away from the man holding him and shoots him several times.
► Men march through thick woods and they are nearly spotted by enemy tanks; one tank stops, a soldier gets out to fill his canteen, and he is grabbed from behind and killed.
► A woman walks past several people who have been shot to death (we see their bloody wounds). A woman in a dark cell is tied to a large pole, and we see that she has bloody wounds on her arms and face, presumably from being beaten.
► A man with a gun takes aim at another man in a prison camp and shoots him; many other men are shot (blood splatters), there are loud explosions (a truck blows up) and men are thrown through the air while the rapid gunfire continues and a tank fires on them. A bridge blows up and men who are trying to cross it are shot.
► A village smolders after being attacked, we hear that over 100 people were killed, and we see women grieving over a flaming pit where we then see the charred remains burning. Two women are shot at, and they get into a truck and speed away while being shot at. Soldiers raid a church, drag a man out and take him away. A man is hit with a stick. A woman is arrested, she is hit in the face, and a man interrogates her and caresses her arms.
► A man plants explosives on a bridge and is nearly spotted; many men crawl toward a prison camp through tall grass. A very sick man is dumped out of his cot and onto the floor. Two men dig a grave in a prison camp and a dog tugs on the leg of a corpse in a grave nearby (one of the men scares the dog away). Men are forced to dig ditches.
► Men talk about "liquidating prisoners." We hear that American and Filipino troops were trapped on the Bataan Peninsula and that they were forced to march 60 miles, in what was called a "death march"; we hear that many soldiers died from disease and abuse in POW camps. We hear that the Japanese planned to wipe out all POWs and leave no trace of their existence. We hear that 500 men are being held in a POW camp and that they will likely be killed.
► Newsreel-like footage shows bombings in Pearl Harbor and the Philippines and we see many dead bodies on the ground. A man suffering from malignant malaria is seen quaking uncontrollably in one scene. A man has large and bloody sores on his feet.

SUBSTANCE USE - A man smokes a pipe in several scenes. Men smoke cigarettes in a few scenes.

MESSAGE - POWs should never be forgotten and every effort should be made to rescue them. Civilized nations treat even captured enemy combatants with compassion. 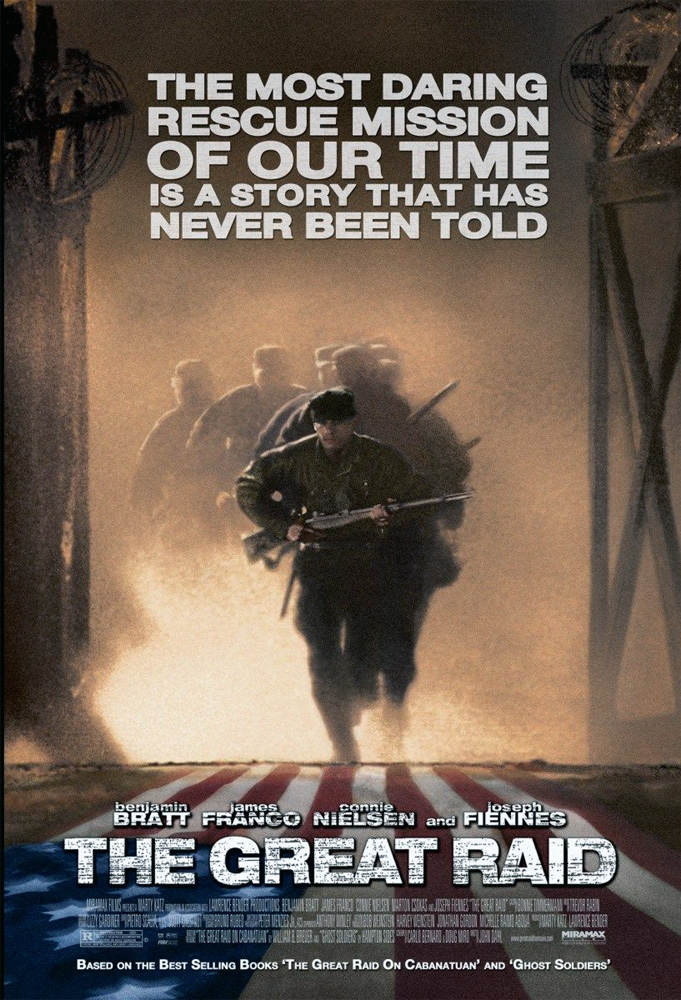