Why is “The Good Nurse” rated R? The MPAA rating has been assigned for “language.” The Kids-In-Mind.com evaluation includes partial non-sexual nudity, several incidents in a hospital where patients seize and medical staff endeavors to revive them with dead bodies shown later and loved ones grieving, a woman has several cardiac episodes and collapses after one, several discussions of medication errors, a few arguments, and more than 10 F-words and other strong language. Read our parents’ guide below for details on sexual content, violence & strong language. Based on a true story and on Charles Graeber’s eponymous book: A conscientious ICU nurse (Jessica Chastain) befriends a new colleague (Eddie Redmayne), who seems kind and caring, until she notices patients under his care unexpectedly dying. She is shocked to further realize that her hospital is indifferent, as were the nine previous hospitals where he worked. Also with Judith Delgado, Jesus-Papoleto Melendez, Marcia Jean Kurtz, Devyn McDowell, Alix West Lefler, Kim Dickens, Nnamdi Asomugha, Noah Emmerich and Ajay Naidu. Directed by Tobias Lindholm. [Running Time: 2:01]

– We hear that an elderly woman died and we see her lying in a hospital room partially uncovered; a nurse wipes down her body and we see her bare breasts and chest.

– Medical monitoring equipment beeps loudly and a nurse charges into a room where others arrive and perform chest compression and use a defibrillator to try to revive the patient; we see the patient’s feet twitching and the first nurse describes the patient as seizing and then coding and we hear a person in the room say, “Mark the time of death. Let’s call his wife.” Monitors in a patient’s room ring and a nurse performs chest compressions and other medical staff uses a defibrillator trying to revive the patient without result. A woman in a hospital seems disoriented and seizes as monitors beep and a nurse does chest compressions; we later see the patient lying dead and her partner enters the room and wails.
► A nurse turns a patient in a hospital bed and the nurse winces and breathes heavily; she leaves the room holding her chest and goes to another room where she breathes deeply, moans and gasps (this happens in a few scenes). A woman gasps and moans after having a heart episode and a man gives her a pill to take. A woman runs up several flights of stairs gasping and perspiring while holding her chest during a cardiac episode; she later stumbles through a hallway and collapses and we see her in a hospital bed later.
► We are told that a person accused of murder confessed to 29 deaths but is suspected of committing 400. A doctor tells a woman that she is at risk of a stroke and a serious cardiac incident within months and that she needs to have a heart transplant. A nurse is reprimanded for allowing a patient’s partner to stay overnight in the hospital room; her boss complains about the budget being stretched thin. A woman says that she has no health insurance and that she needs to work at a hospital for a year before she is eligible. A young girl yells at her younger sister and her mother tries to intervene but the child storms out of the room. A woman tells her young daughter about her heart condition. A woman says that her heart condition causes blood blisters on her heart. A woman’s death is classified as suspicious and the police are called in to investigate; we hear that the woman has been cremated so there is no body to evaluate. A man says that his mother died in the hospital when he was young and that they lost the body. A young girl says that she is playing the part of a mayor in a play and that her teacher insists that she wear a suit telling her that it is weird for a mayor to be female. A man complains that someone accused him of poisoning a dog.
► A police officer pulls a man over in a car, holds a gun on him, handcuffs him on the ground and we later see him in the police station being questioned. A police detective yells and pounds on a table in an interrogation room when a suspect will not answer questions and yells, “I can’t,” repeatedly. A police detective yells and pounds on a table when a woman refuses to answer his questions. We hear that a man was charged with criminal trespass and that he slashed a co-worker’s tires after they broke up. A nurse looks at a patient’s file and says there is a medication error. A coffin is exhumed in a cemetery. A woman reaches toward a man over a table and he slams his hand down.
► A woman in a hospital is shown with open wounds on her face and we are told that she had an allergic reaction to amoxicillin. A woman is shown wearing a neck brace and with cuts and bruises on her face in a hospital bed.
► A nurse inserts an IV needle into a woman’s arm in a hospital bed and we see it puncture the flesh.

The Good Nurse SUBSTANCE USE

– We see medications being dispensed to patients in a hospital, and a man gives a woman a pill to take after she has a cardiac episode. Two women in a restaurant order glasses of wine.

– Hospitals are businesses and profits, not patients, are their primary concern. Without health insurance, you cannot get medical care. 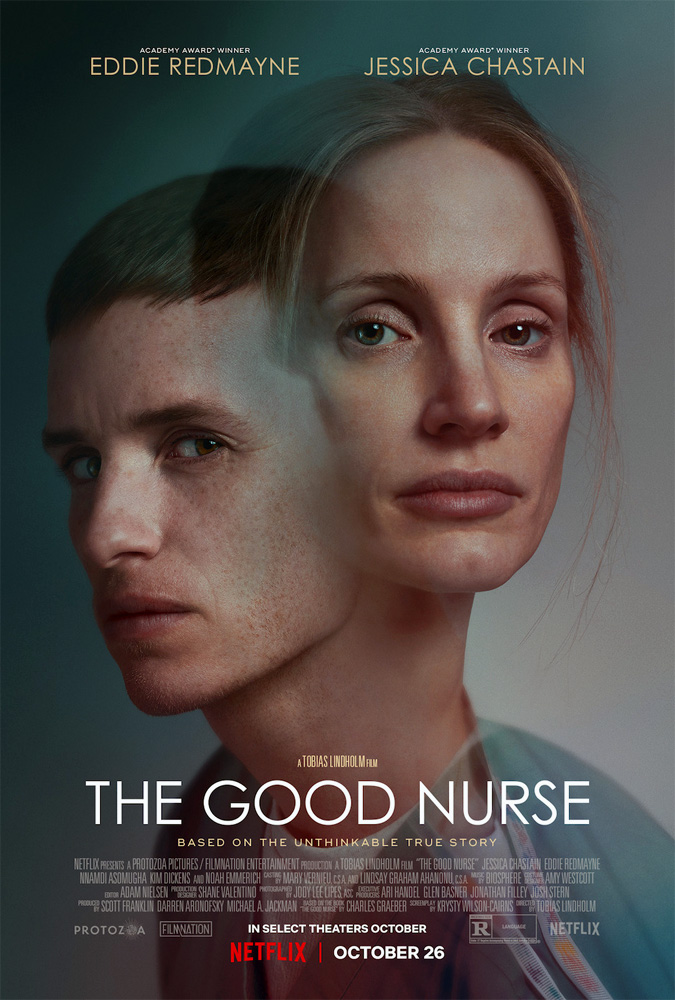