A woman (Drew Barrymore) and a man (Justin Long) meet only six weeks before she leaves NYC to head back to San Francisco. Despite both being upfront about their short-term intentions, their relationship soon turns serious and they experience the ups and downs of a long-distance relationship. Also with Charlie Day, Jason Sudeikis, Christina Applegate, Jim Gaffigan, Ron Livingston, Oliver Jackson Cohen and Natalie Morales. Directed by Nanette Burstein. [1:37]

SEX/NUDITY 8 - A man and a woman kiss passionately as they walk into a room, they take each other's clothing off (the woman is wearing a tank top and shorts under her clothing, while the man is nude and his bare buttocks are seen) and begin to have sex on top of a table; a woman walks in the room and shouts when she sees them, and a man is then seen sitting at the table -- presumably, he was watching them having sex.
► A man and a woman are seen in bed, covered by blankets as the man slowly thrusts on top of the woman (a small portion of the man's bare upper back is visible); they are later seen lying side-by-side in bed.
► A man and a woman walk into a room, and turn on the light to see a man on top of a woman, thrusting with the woman's legs around his waist; they are both fully clothed and moaning, they immediately stop, a girl runs toward the room and all four adults shout at her to stop.
► A shirtless man (his upper bare chest visible) is seen lying in bed talking to a woman on the phone, as she lies in her own bed; they have an erotic conversation about masturbation and imply that they are imagining having sex with one another, they both begin to moan as their hands are seen moving under covers (implying masturbation) and they shout in pleasure until they both stop and the man makes a crude joke about his genitals.
► A man and a woman kiss while sitting on a bed -- a man in another room makes a remark about them "hooking up" -- they continue to kiss and fall back onto the bed, and the woman is then seen putting on her shoes and the man is seen shirtless, lying in bed with clothing on the floor, implying that they had sex.
► A man and a woman kiss after he walks into the shower (it is implied she is nude, but only her bare shoulders are seen), and they hug and kiss. Men and women kiss multiple times, including a man and a woman kissing passionately in multiple public places and in front of groups of people. A man makes a remark as a man and a woman kiss passionately. A man and a woman kiss after the woman jumps into the man's arms.
► A man enters a self-tanning booth, he takes off his robe (his bare chest is visible), his underpants are seen hitting the floor and he is seen fully nude from the side (his buttocks are visible as he covers his genitals with his hand). A man's bare buttocks are seen with a pale handprint on them from self-tanning. A woman is seen running out of a room wearing a bra and covering herself with a blanket. A shirtless man (his bare upper chest visible) watches through a window as two women hug. A woman wears a back-exposing shirt. A woman wears a cleavage-exposing shirt.
► Using crude language, a man tells another man that he is interested in having intercourse with a woman. Three men discuss a list of women that they are interested in having sex with; one man says he imagines himself on top of the woman while she is "looking up" at him. A man asks a group of women if they would like to "hook up" with him because he is feeling "sexy"; the women decline. A man makes a crude joke about a man coming out of a woman's genitals. A man remarks that another man looks like he is performing oral sex on himself when he ducks his head; the man then pantomimes the other man's actions, and the other man explains in detail how he would perform oral sex on himself and confirms that he has in the past. A woman uses crude language to shout at a man, telling him she has male genitals and that she wants him to perform oral sex on her. A man discusses masturbation loudly (using slang terms) with another man while in the company of a group of people, including an elderly woman who makes a remark to the man about being "too rough" while masturbating and adding that she will talk to her grandson about that. Two women have a crude conversation about "dry humping," including one of the women going into explicit details about her sexual activities with a man. Three men have a conversation using crude language about a woman performing oral sex on multiple people. Two women have a crude discussion about men performing oral sex on women. A man and a woman discuss how they had sex: the woman says she regrets it and that the man had thrown up on her and cried. A woman tells a man to have "phone sex" with a woman. A woman makes a crude joke that she "does not want to get date raped" by a group of men. A woman jokes that a man is promiscuous. A man tells another man that a woman's behind is attractive.
► A woman is seen scrubbing a table vigorously after discovering a man and another woman having sex on it.

VIOLENCE/GORE 3 - A woman narrowly misses hitting a man in the face with a dart, the man shouts at the woman, they have a profane shouting match and the woman has to be picked up and carried out of the bar after the man threatens to beat her up.
► A man screams as self-tanning spray gets into his eyes and mouth and he is seen spitting in a panic. A woman accidentally slams a door on a man's face, and he shouts but appears unharmed. A woman shouts as she slams her leg on an open drawer; she appears unharmed. A woman screams when a microphone shocks her mouth.
► A woman shouts at a girl, and she spits chewed up cookie into the woman's hand (we see the chewed up cookies coming out of her mouth). A woman is seen spitting wine back into a glass (we see the wine come out of her mouth).
► A woman tells a man that she will dismember his genitals if he hurts a woman. A man jokes that he will send a person to a gas chamber, after a person remarks that his hair and facial hair resemble Hitler. A man jokes with a woman that he would like to die from eating too much tortellini or from water boarding.
► Two men walk into a room and see a man sitting on a toilet; they discuss how the man is sitting and crudely discuss his bowel movements. A woman asks another woman if a mark on the wall is blood or feces; the woman says she does not know and that it "smells like a skin infection." A woman says a bar smells like "urine and puke." A woman says that a man had thrown up on her and cried.
► A man and woman playfully shove cake on one another.

SUBSTANCE USE - A man and woman smoke from a bong and laugh and act high, and a woman remarks that she is going to get "wasted." Men and women drink alcoholic beverages on multiple occasions, including at a bar and having wine with dinner, a woman is seen drunk and is seen blacking out on a stairwell, and a man orders shots of alcohol for himself and a woman.

MESSAGE - Love is hard, and long-distance relationships take a lot of work. 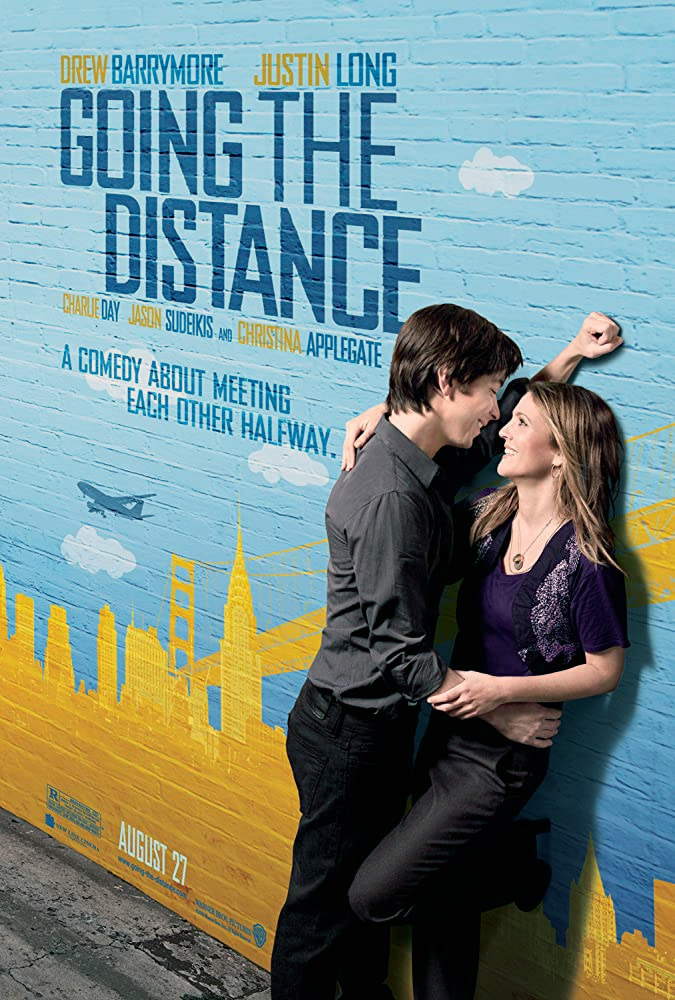