The Egyptian god of darkness (Gerard Butler) kills his father, blinds his brother (Nikolaj Coster-Waldau), and takes Egypt's throne, throwing the empire into an epic war. A mortal woman (Courtney Eaton) dies, but her lover (Brenton Thwaites) is determined to fight the god of darkness and bring the woman back from death. Also with Chadwick Boseman, Elodie Yung, Rufus Sewell and Geoffrey Rush. Directed by Alex Proyas. [2:07]

SEX/NUDITY 5 - A man enters his bedroom and finds his intended wife waiting, they lie on the bed with him on top and kiss (sex is implied), the camera cuts to the couple under covers side-by-side (we see the man's chest and abdomen and her back and the top of her bare buttocks while her long hair covers her chest) and the man and woman kiss briefly; he gets out of bed in a close-up and we see his bare chest.
► We see the silhouette of a nude woman behind a thin screen (breasts, buttocks and thighs are outlined clearly); she walks out from behind the screen wearing a snug floor-length dress that reveals cleavage. Four close-ups focus on the large cleavage of a woman wearing a deeply cut V-neckline. Several scenes show a woman wearing a low-cut, filmy dress that reveals cleavage and cut-outs at the waist and stomach, and cut-outs from the hips to the ankles (we see her bare buttocks and backs of thighs in four scenes and see cleavage and skin in cut outs from waist to feet in several shots); in one scene, she asks a man if he prefers the rear view better than the front and he says yes, so she turns around in the background of the scene and we see her buttocks. A man carrying a woman in a swamp drops her into the water and the wet material of her dress clinging to her thighs and lower legs. Several palace scenes include women wearing low-cut, sleeveless, floor length dresses that reveal significant cleavage, and a few dresses have cut-outs that reveal skin at the waist and bare backs. Thousands of men wear knee-length skirts and high boots that reveal bare lower thighs, knees, and calves; many of the men have bare arms and sections of their backs that we see through straps of armor. In a few scenes, about two dozen men appear shirtless and we see bare chests and backs; in a pool scene in a palace, a dozen of these men lie around the pool with several women whose bare thighs and legs show from beneath long skirts that are hiked up. Two men wear only loin cloths that extend from waist to mid-thigh in several scenes.
► A man and a woman kiss passionately in two scenes. A man and a woman kiss briefly in six scenes. A woman kisses a man, he pushes her and calls her a liar, and draws a scimitar; she then disappears into another dimension.
► A man accuses a female servant of fornication in his palace. A man tells his estranged wife that no amount of women will satisfy him, especially not her alone. A woman says that love is as powerful as any god. The goddess of love says that she can manipulate anyone who is not already in love with someone and she tells a man that she sees that he is in love.

SUBSTANCE USE - A woman in a palace pours wine from a pitcher into a cup and sips it (we cannot see the wine), two men hold wine in huge cups held in two hands and one drinks, pitchers are seen on tables and might contain wine, and a man says that "The favor of a god is intoxicating."

MESSAGE - Egyptian mythology is full of action and colorful characters. 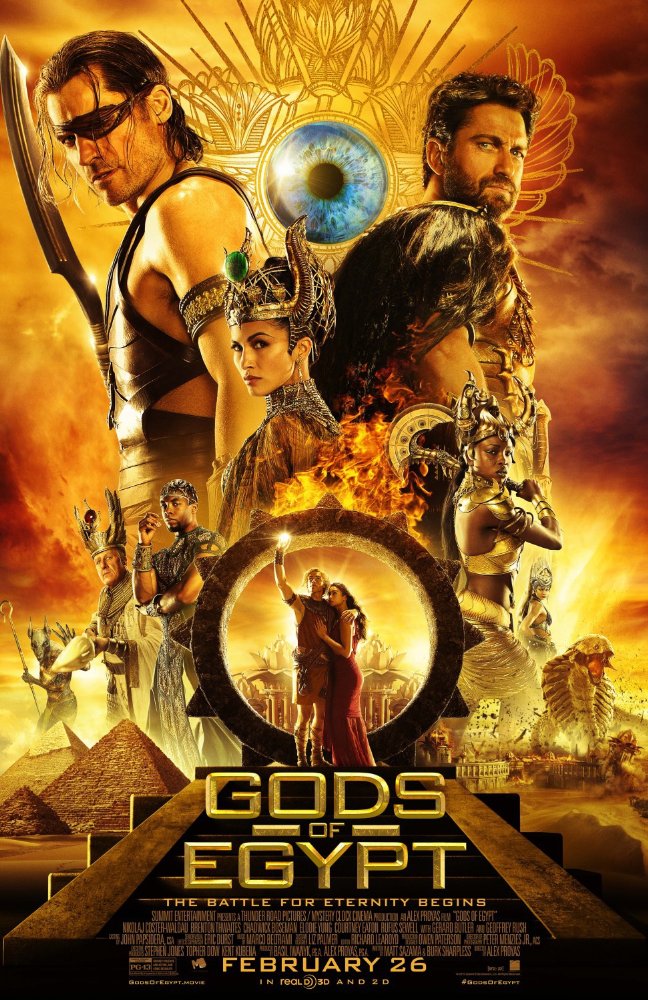