When the cast of "Glee" went on a multi-national singing and dancing stage tour, cameras tagged along and caught up with the cast, as well as some fans who were inspired by the hit television series. With Cory Monteith, Dianna Agron, Lea Michele and Gwyneth Paltrow. Directed by Kevin Tancharoen. [1:15]

SEX/NUDITY 4 - During a dance scene a young woman wears a cleavage-exposing bikini-style top and extremely short shorts, and she dances suggestively, including crawling on the ground and being surrounded by men and women also dancing suggestively.
► A group of men and women are seen wearing leather clothing: the women wear bikini-style tops and short shorts and the men are shirtless, wearing leather overalls which expose a portion of their bare chests; the men and women dance suggestively, running their hands over their bodies and we see the women crawling on the ground. A young woman flips and rolls down a stage and on top of a man, and shimmies her hips and chest suggestively.
► A group of young women dance wearing short skirts with Spanx shorts under their skirts; the shorts are visible when the young women kick and flip over as part of the dance. Young women dressed as cheerleaders flip and tumble and we see their Spanx shorts under their short uniform dresses. A teen girl in a cheerleader outfit flips and we see the Spanx shorts under her skirt. A group of young women wearing cheerleader outfits with Spanx shorts bend over stationary bikes, dancing suggestively as part of a dance routine. Young women crawl through the legs of young men during a dance.
► A young man and several young women grab their crotches as part of a dance routine. Teenage boys thrust their hips as part of a dance routine. A young man stands behind a young woman and dances, putting his arm around her waist. A young woman and a young man put their arms around each other's waists as they dance, young men and women hold one another, dancing together, and young women appear to fall into the arms of young men who catch them.
► A young woman's button-up shirt is unbuttoned low, exposing a small amount of cleavage.
► As part of a stage act, a young woman asks a young man if he "wants to make out"; another young man acts shocked, and tells the young woman to not "take his man." During an interview, a young man explains that he had written a journal as a teenager about his attraction to another teen boy, and we see the words "passionately kiss" flashed on the screen. Various teenage girls and boys, young men and women, and adult men and women discuss how cute they think the male and female characters of a show are, including teen girls saying a young man is "cute" and two men discussing which teen male character they prefer. A teen boy says that a young woman is "hot." A young man sings lyrics to a song that include "panty snatcher"; we see a very young boy singing along to a song, including singing the lyrics "panty snatcher." A young man and a young woman sing a song to one another and the lyrics say that they want to share "one more kiss." A young woman jokingly says during an interview that she hopes that her breasts look good in 3D. A young man jokes that his haircut offers "something for the ladies to hold onto" but does not explain what he means. A young man jokes that females want to get in the "zone" (perhaps implying his crotch). A young man wears a shirt that says, "I'm with Stupid," with an arrow pointing to his crotch. 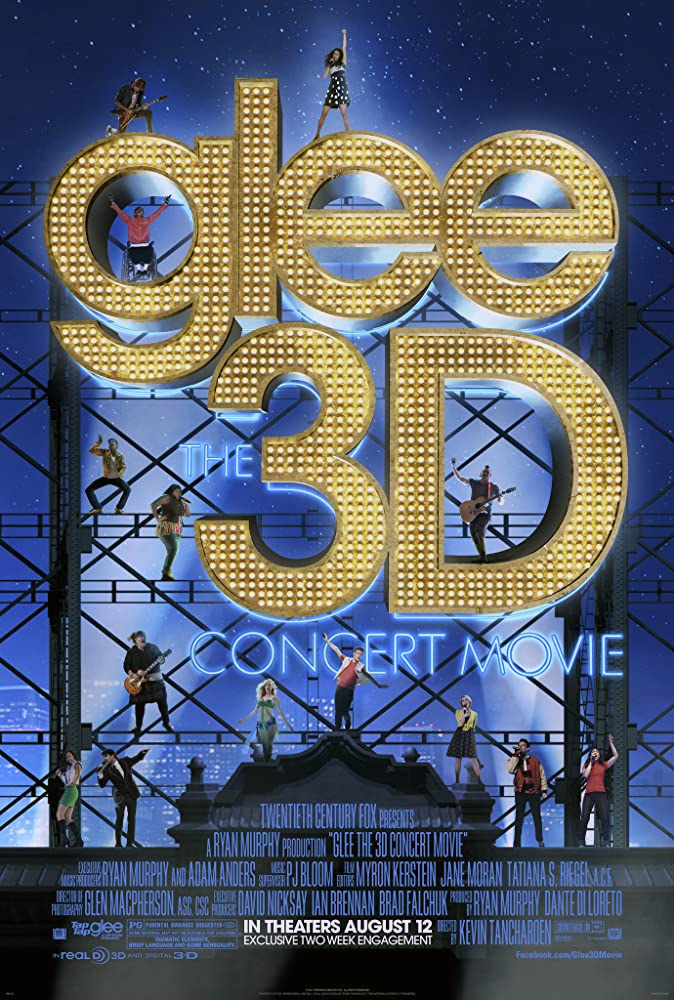