SEX/NUDITY 3 - Some sexual innuendo referring to rape and incest, and a passionate kiss. A woman hangs onto a man and kisses his cheek. A man nearly kisses his sister, pulls her down on a bed and rests his head on her chest (nothing else happens, as she leaves quickly afterwards). We see most of a man's bare buttocks when he's wearing a tiny loincloth; also, we see other men in more modest loincloths and some shirtless men.

VIOLENCE/GORE 10 - We see about five gladiator battles (most are extended scenes) during which people are beheaded, stabbed, sliced, impaled, shot with arrows, hit with spiked balls, clothes-lined with chains, punched, and kicked; also, a man is attacked by a tiger twice (he impales one of the tigers), a person is sliced in half, a man's foot is stabbed in close-up, a man is stabbed in the neck, and chariots are overturned and their riders are either dragged behind or knocked to the ground (during all of the fights we see lots of blood spraying, sometimes see the bloody wounds or corpses, see people falling to the ground, and hear lots of slicing sounds). In an extremely chaotic extended battle scene we see men and trees engulfed in flames after being hit with flaming arrows and cannonballs, a man beheaded, men stabbed and impaled with swords, and men and their horses falling to the ground (throughout the scene we see blood spraying and hear loud slicing sounds during the stabbings). In another scene of hand-to-hand combat we see people stabbed, shot with arrows and hit with shields. A man stabs another's throat, slices another's face (we see the bloody cut), throws a sword at another and impales him (we see the knife sticking out of the man's back), and stabs another who falls off his horse (we hear slicing noises throughout the scene). A man sitting on a horse is hung when his horse runs out from underneath him, then he's shot with many arrows. A man suffocates another by pressing the victim's face into his chest. Horses trample a young boy (we see the impact from a distance, then see his body lying on the ground from a distance). We see a headless body riding a horse, and its neck stump hits a few poles with thumping noises as it rides through a camp; a man holding the head in his hand throws it on the ground (we see a split-second close-up of the head rolling on there). A man chained by his hands is stabbed in the back (we see some blood running out of the wound) and another chained man is nearly stabbed in the back of his neck. In a few scenes we see men sparring with what look like wooden swords; one man is hit in the stomach and arm with the side of one of the swords. A man throws his sword into the stands after a gladiator fight (it hits a table). A woman slaps a man twice, a man appears to grab a man's belt or crotch, a man grabs a woman's neck, and a man grabs a woman's face and yells at her. A man pretends to choke and die after eating some food. A snake is placed in a man's bed while he's sleeping (we never see or learn what happens to him). We see two men chained spread-eagle on a fence. In a few scenes after a battle we see lots and lots of corpses lying on the field; in another scene we see several skeletons lying in a field. We see some charred bodies lying in a smoking field, then see the blackened feet of someone who's been hung. We see blood running down a man's arm after being stabbed in a fight, and we see a few close-ups of the extremely bloody, gaping wound in a few scenes afterwards (in one scene it looks like there are white worms in the wound, in another it's filled with what looks like cornmeal, and in another scene it is pus-filled and makes a squishy noise when a man pokes at it with a stick). We see a couple of close-ups of a man's very bloody arm as he carves off a tattoo with a rock. Throughout the film we see men with bloody facial cuts, bloody bodies and bloody clothing; also, we see a man spitting up lots of blood during a gladiator battle, some bloody swords during battles, and some bloody corpses. We see urine running down a man's leg and pooling by his foot.

LANGUAGE 3 - A couple of scatological references, a mild obscenity and a few insults. 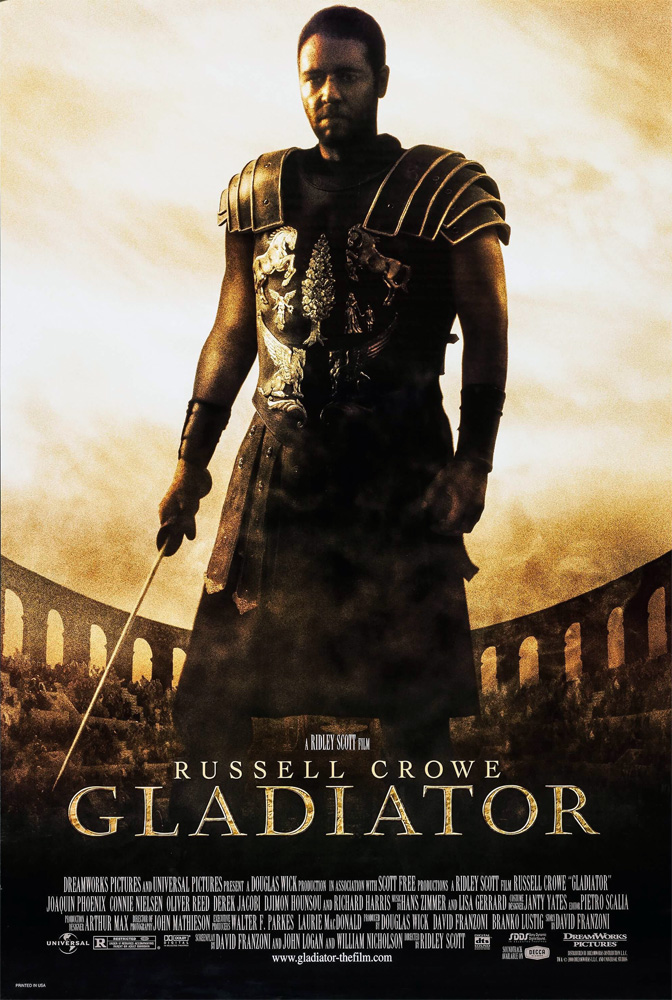