The year is 2176 and Mars has being colonized by miners. Their matriarchal society is destroyed when they disturb ruins of an ancient Martian civilization and set off a doomsday defense system programmed to unleash ghosts that will destroy any alien presence. When a cop (Natasha Henstridge) arrives with her team, transferring a notorious criminal (Ice Cube), they find the Earth colonists dead; the only survivors are the outpost's criminals, all neatly tucked away in the local jail. However, Martian ghosts remain bent on possessing the intruders. Also with Jason Statham, Clea DuVall, Pam Grier, Joanna Cassidy and Richard Cetrone. [1:55]

SEX/NUDITY 4 - A man and woman kiss passionately, but briefly. We see a woman in her underwear (a tight fitting T-shirt and skimpy panties) which exposes some cleavage, thigh and part of a buttock. We see a woman in a tight-fitting leather suit which exposes cleavage. A man propositions a woman a few times and there is a reference to being "breeders." A woman caresses another woman's shoulder suggestively and the one woman says she's "straight" to rebuff her. A woman talks about having to "pay the price" for a promotion (i.e. sexual favors). There is an allusion to paying for sex and a man makes suggestive remarks about his endowment.

VIOLENCE/GORE 9 - When the Martian ghosts "infect" a human host they begin performing gruesome self-mutilation; we see people tearing at their skin, poking themselves with sharp, pointed objects, slashing themselves, sharpening their teeth, cutting off their faces and wearing them as masks, etc. (there is a lot of blood and lots of squishy, slurpy sounds during the few scenes that depict this). We see a man in a vehicle with a knife as he slashes his own throat; there's a lot of blood, some of which sprays on the windshield. One woman who has been infected seems to vomit a red cloud. A man grabs a grenade just as it explodes, and he flies through the air. There are several scenes showing ghosts being shot and we often zoom in on their bloody faces. We see a man being thrashed with a sword and eventually beheaded as a crowd chants. Ghosts attack a group of people in several scenes by throwing saw blades and spears; a man is hit in the head and falls to the ground, a man is speared, a man loses his arm and then his head to a saw blade, a woman is decapitated also, a man is cut across the throat (blood spurts), a man is hit with a blade, and a woman is cut in the leg. A mob of ghosts grab a man and thrash him with sharp weapons. A ghost crashes through the roof of a building where he is set on fire; we see him smoldering and with a partially melted face. A group of people open fire on ghosts several times; these scenes show a lot of carnage, ghosts being shot, people being slashed, stabbed and decapitated, kicking, and punching. We see some ghosts who snarl and have bloody faces, mouths and teeth. A woman is attacked by some ghosts who swing at her with sharp weapons; one is shot and one is beaten (presumably to death) with the butt of a gun. We see a man stitching up a large bloody gash on a woman's leg. A group of people walk through a ghost town and two of them come upon a building filled with hanging, headless bodies covered with blood. Another group of people discovers a similar scene with hanging, headless, very bloody bodies. A man discovers a field with heads stuck on posts (we see this a few times); we see a Martian ghost putting one head on a post and hear it squish as the post goes through. A severed hand falls from a guillotine type mechanism, small bottles filled with bloody body parts hang from a ceiling, two people enter a building and see blood splattered walls and furniture and puddles of blood in a hallway. A man cuts his thumb off with a machete while trying to open a can (we see blood spurting out from the stump and a blood soaked bandage). There are several discussions of gruesome murders which left the victims mutilated, and there's a reference to a "slaughterhouse." There are a few jump scenes; a man comes around a corner and is startled by another man coming around the other side with a gun drawn, ghosts attack humans from behind, a door is thrown open and a woman in a sort of a trance falls out. A man and woman fight with punches and kicks and then the woman is knocked out by a punch in the nose; we see some blood trickle. A woman grabs a man and holds him down nearly breaking his arm after he threatens her verbally. A man threatens two women with a knife held to their throats, and several people are threatened with guns. We see a woman with a bloody cut on her neck several times. There are many explosions and fires, and there's a nuclear explosion which shakes people on a nearby train, a mining compound is destroyed, and a train car explodes. We see a wave of red particle dust several times: once through a tunnel causing people to run and scream, once over a hillside washing over people, and once approaching a settlement. A train lurches as we hear a report of a huge dust storm approaching, a woman crashes in a modified weather balloon resulting in an explosion and fire. We see a woman handcuffed to the berth of a train car a few times. A ghost train drives through a dark, red, dusty, windy countryside.

MESSAGE - Don't mess with alien stuff unless you know what you're doing. 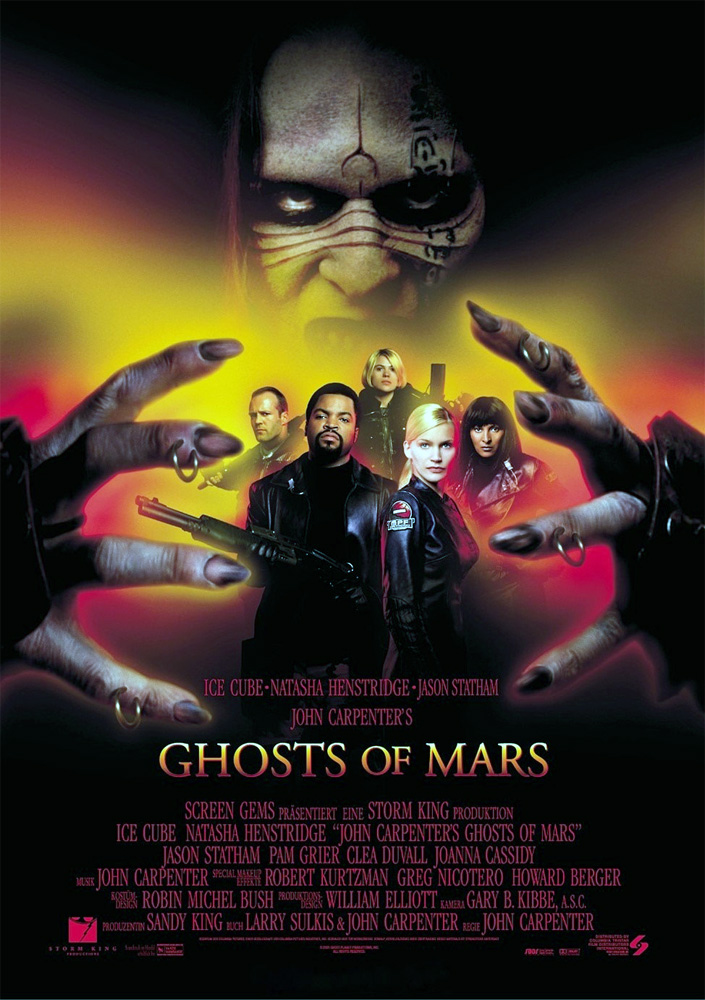