In the second installment of Jim Davis' comic strip as movie, Garfield follows his owner Jon to England. There, Garfield is mistaken for a noble cat that has inherited a castle. Enjoying the royal treatment, Garfield must also protect the castle from Lord Dargis who wants to turn it into a resort. With Jennifer Love Hewitt, Breckin Meyer, Lucy Davis, Billy Connolly and Bill Murray. Directed by Tim Hill. [1:30]

SEX/NUDITY 1 - A man and a woman kiss and hug a few times, and a man and a woman flirt in a couple of scenes.
► A man makes a comment about drinking alcohol and then, "Salsa dancing in your knickers."
► A couple of women wear low-cut dresses that reveal cleavage, and we see statues of men and women that reveal the men's bare chests.

VIOLENCE/GORE 2 - A dog attacks a man's trousers and pulls out the crotch (the man screams), a dog lunges at a man, he yells and we see him later with shredded clothing, and a dog bites a man on the buttocks. A man holds a woman threateningly, and a ferret crawls up his trouser leg causing him to release the woman.
► A man punches another man in the nose. A man grabs another man by the lapels and yells at him.
► A man chases a cat, a barking and snarling dog chases a cat, and a dog viciously tears up a pillow and a man orders it to kill a cat. A dog snarls and jumps through a portrait of a cat.
► A man puts a cat in a picnic basket and throws it into a river (the basket does not sink), a man traps a cat in a pillow case and tosses it into a dark basement cell, and a man with a spiked ball on a chain chases a cat.
► Animals shoot clay pigeons at a man and he is nearly struck. A man trips on a suit of armor, knocks his head on a shield and falls unconscious.
► A canopy falls on a man (he is uninjured) and a statue falls on a man (he is also uninjured). A man's finger is pinched in a mousetrap.
► A cat is nearly hit by a car, a cat jumps off a bridge, falls onto a passing boat and we hear a thud (it appears uninjured), a cat falls out a window and into shrubs, and a cat jumps and clings to the back of a moving truck.
► A bird is sucked up into an exhaust flue, a cat hits a dog with a turkey leg, a cat kicks a dog off a sofa, and a parrot is hit with a pillow and falls off a sofa. We see many pets in cages in a kennel.
► A cat slides and crashes into a table holding a vase of flowers that tips over and the vase breaks, then runs into a statue that tips over and knocks several other statues down breaking them all, and another vase falls on the floor and breaks.
► A man and a woman are sprayed with lasagna when a cat eats it aggressively, a man spills wine on his shirt and falls on the floor, and a man faints and spills a tray of food. A dog urinates on a palace guard's boot and is then chased by the guard, and a cat flatulates in a dog's face. A cat burps loudly in a couple of scenes, and a dog drools. A cat climbs into a bidet and is squirted in the face by the water. A cat makes a remark about eating someone's liver "with fava beans and Chianti."
► We hear that a woman died and see the reading of the will where a man becomes angry about what she left to him. A man talks about doing away with many farm animals and makes a veiled reference to eating some of them.

MESSAGE - Nothing is more important than having someone who loves you. Lasagna is delicious. 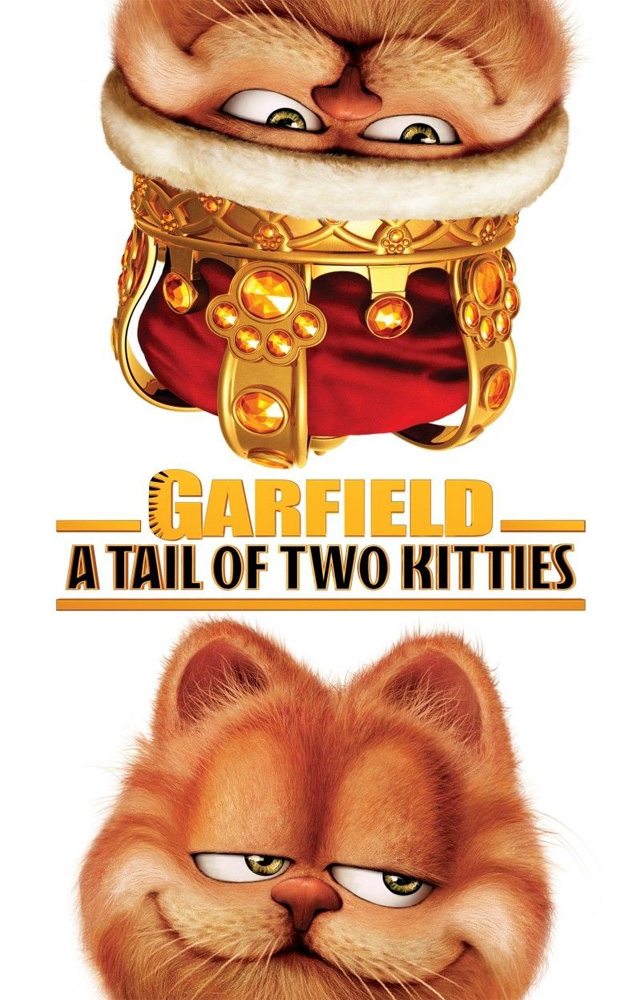