SEX/NUDITY 5 - A police officer says to a woman in a bar that he likes to play Post Office (the kissing game), she says, "Let me guess: You want to take me away from all this and make an honest woman of me?" and he replies, "No, ma'am. I was just hoping to take you to bed"; we later see them in bed (his bared shoulders and arms are visible) with her lying on top of him under covers (we see her bare back and the side of her breast) and sex is implied.
► A woman goes into a room expecting to attend an audition but she is threatened with gang rape by three man; another man comes and interrupts them (please see the Violence/Gore category for more details).
► A man sits in a bathtub as his wife sponges off his bare shoulders, arms and upper chest and she tells him that he is "good in the sack" and he smiles as he kisses her and the scene ends. A man and a woman kiss briefly, fully clothed in a couple of scenes.
► Men watch exotic dancers in a bar and we see the dancers wearing lace-and-sequin bras and panties while shimmying and writhing to music; one woman wears black tassel pasties instead of a bra and men hoot, wolf-whistle and shout at the women.
► In a hallway scene, we see a half dozen women wearing light sleeveless slips, with one woman in a camisole, panties, garters and thigh-high hose (we see some cleavage and the tops of her thighs) as three police officers walk them out of a building. A woman's photo on a magazine features a bare midriff below a tight, wide bikini top that reveals a little cleavage. A drawing on a pin-up calendar features a woman wearing a camisole, panties, stockings and garters, revealing her bare midriff, belly button, thighs and cleavage. A club singer wears a shoulder-less blouse with puffy sleeves and a bare midriff. In a bar, one man asks another, "Who's the tomato?" (referring to a woman) and we see a woman wearing a floor length dress slit up to the top of the thigh revealing her bare back and shoulders. A woman is pregnant and we see her extremely swollen belly; in one scene, she lies in a bathtub with a newborn baby in her arms, having just delivered alone at home (please see the Violence/Gore category for more details). In close-up black and white, we see a bare-chested boxer. A man wearing a fedora, no shirt and a long towel wrapped at the waist to show his bare abdomen and belly button sits in a chair while watching blurry film footage of two boxers in a ring.
► A man shouts, using crude terms, when police take away several women who are working for him as prostitutes. A man tells a teen boy to worry only about getting his hand up a girl's skirt and not about gangsters.

SUBSTANCE USE - A gangster explains to cohorts that he is in control of all the Mexican dope in California and will receive a large shipment of heroin, and we see a train yard where bricks of heroin are being loaded from a train to a small army truck. Several nightclub scenes feature men and woman drinking glasses of beer or wine and martinis, a police chief drinks often from a hip flask of alcohol in his office, an undercover cop drinks from a flask on a job, a police chief brings two cases of beer to a policemen's cookout, we see two men drink from a bottle of whiskey on a front porch at night, several scenes include men drinking beer from bottles at home and in hotel rooms and during card games, five police detectives drink bottled beer in a small dark tavern at the corner of a short bar, a dozen sheriffs and deputies drink beer as they gamble with civilians in a casino in a smoky room where several men smoke cigarettes, and a marquee outside a club advertises "DINING, DRINKING." A close-up shows a man's thumb igniting a metal cigarette lighter as he smiles and close-up of a woman's face as she blows cigarette smoke into the air, a man lights a cigarette lighter several times during the film in a nervous habit, a woman smokes a cigarette in her house twice, and dozens of scenes include men and women lighting and smoking cigarettes (at home and on the street, in restaurants and cafes, in nightclubs, outside theaters, in offices, in hotel lobbies and hotel rooms, in elevators, at a cookout and in automobiles).

MESSAGE - It takes a tough crew to fight organized crime. 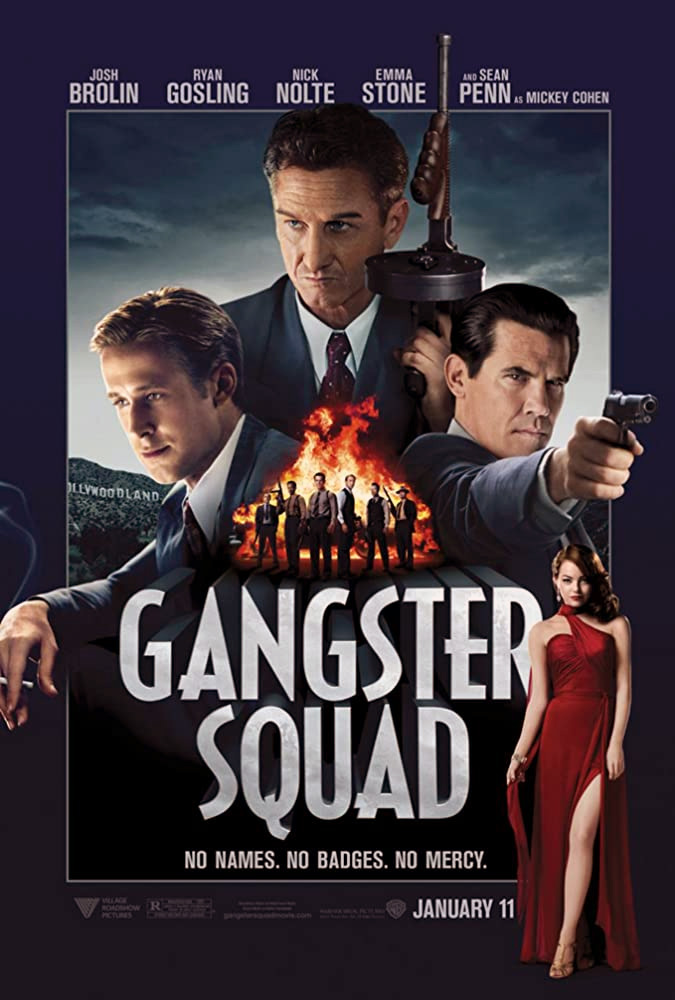