In this sequel a young woman has a premonition about a huge traffic accident that results in her own death, and the death of her friends. She blocks traffic in order to prevent the accident, but it seems that the Grim Reaper doesn't like being cheated. With Ali Larter, A.J. Cook, Andrew Downing, Michael Landes and T.C. Carson. [1:40]

SEX/NUDITY 5 - A woman on a motorcycle lifts her top exposing her bare breasts. A man sniffs a woman's hair while they are on an elevator (it is an uninvited presumption). A woman talks about taking "whips, condoms and chains" on a road trip, and a man talks about "his porno." A woman kisses a man on the cheek, and a man and a woman hug. A man takes off his shirt and we see his bare chest (he has a nipple ring) and back, a woman wears a tank top that reveals the outline of her nipples, we see a woman in a bra, a woman sleeps wearing a tight tank top, and women wear outfits that reveal cleavage and bare midriffs.

VIOLENCE/GORE 9 - There are many brutal and gruesome accidents which lead to people's deaths: Logs fall from a moving truck and one crashes through the windshield of a car killing the driver (we see the impact as the man's upper half disappears and blood sprays), a motorcycle wipes out and its driver slides into a log and then is killed when his motorcycle slams into him, many cars crash or flip and explode (we see the passengers before impact panicking and screaming, we hear people screaming). One passenger is stuck in his burning car and we see him surrounded and then engulfed by flames, a truck barrels through debris and toward another car, a truck slams into a car (containing three passengers) that bursts into flames, and a woman is decapitated when her head is stuck in an elevator door and the elevator goes up (two women end up being covered with blood and two men scream in terror). A man is impaled through the eye by the leg of a fire escape ladder (blood spurts from the wound) and a woman is impaled through the head by a sharp object (we see blood around the wound). A boy is crushed under a huge plate of glass (we see his body crumple and blood sprays), a barbecue grill explodes and a charred and smoldering arm lands on a picnic table in front of a woman, and a man is cut in half by barbed wire (we see blood spray, blood drips from his mouth and bloody organs are exposed). A spark ignites an oxygen filled room as a woman opens a door, sending the woman through the air and incinerating a man who's in the room (we see the woman's face melt and see her charred remains on the floor). A man is wounded in a car crash (we see blood on his shirt and hear him gasping for air), a woman drives a van into water and we watch her drown as a man struggles to try to get the door open. A man gets his arm caught in a garbage disposal while his microwave sparks and smokes and a pan on the stove catches fire that spreads to the rest of the kitchen and ends in an explosion. A smoldering joint is flicked onto a woman's windshield where dried leaves begin to smoke, and a kayak hanging from a ceiling is untied and swings in the direction of a woman almost hitting her. A man's hospital bed is pushed away from breathing equipment causing him to gasp for air. A car loses control, runs off the road and crashes through hay bales and a fence and when the car stops we see a sharp pole sticking through the back of a woman's head rest (missing her head), and a man puts a gun to his head and pulls the trigger several times (no bullets are discharged). A car explodes, many dangerous looking items in a closet fall on a man making him fall on the floor, several pigeons crash into an office window (one breaks through and flaps around on the floor), and we hear that a baby has its umbilical cord wrapped around its neck and its vital signs are dropping. A boy is given too much nitrous oxide, which makes him unable to move, and a fish falls into his mouth causing him to gasp and gag. A boy is nearly run down by a van, a woman has a premonition about a car crashing into water, and a man gets his foot caught in a closing elevator door. A man pushes a cart with a dead body on it (we see a bloody wound), he uses pliers to rip a nipple ring off (we see the nipple stretched and then hear it tear), and then shoves the body into a fire (the dead man is being cremated). A boy is given an injection in the gum, we watch the needle go in his mouth, then watch the dentist's drill working on a tooth while he winces. People recount incidents of people dying tragically: a teacher was stabbed by a student, a woman was hit by a bus, a theater collapsed killing everyone inside, a woman's mother was shot in a car-jacking. There are many discussions of a plane crash, several survivors and how they died afterward in freak accidents (we see newspaper clippings and hear people describing how they each died). A fish is sucked onto a filter and appears unable to free itself, and a large spider crawls around a woman as she sleeps. We see people (some catatonic) in a mental institution and hear them screaming and moaning, and three people go into a dark hallway and see an eerie shadow on the wall. A baby is born (we see the infant covered with slime and the woman's hospital gown has blood on it).

SUBSTANCE USE - People are shown with a bag of marijuana, they are shown smoking marijuana cigarettes, and one character snorts cocaine repeatedly. A man is shown drinking a bottle of beer while driving. A woman smokes tobacco.

MESSAGE - Death is hard to beat. 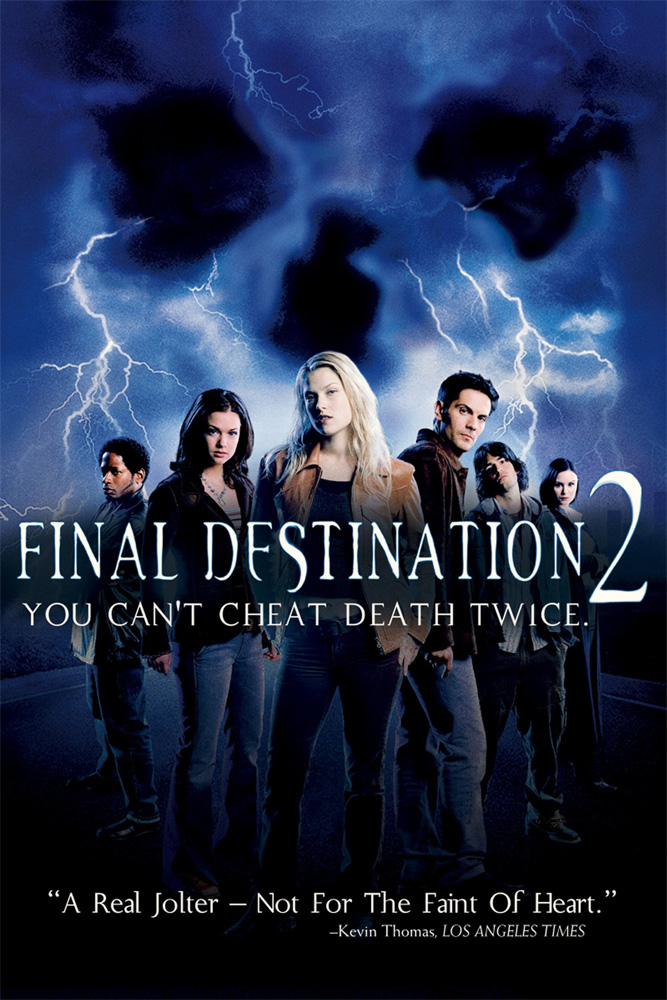