A teen who saves himself and his friends from dying in an airplane crash realizes that the Grim Reaper is killing them off one by one in freak accidents. With Devon Sawa, Kristen Cloke, Amanda Detmer, Chad Donella, Brendan Fehr, Ali Larter, Seann William Scott, Daniel Roebuck, Kerr Smith, Tony Todd, Barbara Tyson, Kristina Matisic and Troy Yorke. [1:30]

SEX/NUDITY 5 - A little sexual innuendo. We see a girl leaning over a boy sitting in a chair, kissing him passionately. We see a picture of a topless woman when a boy looks at a Penthouse magazine and a close-up of part of a boy's bare upper thigh as he sits on a toilet.

VIOLENCE/GORE 8 -In an extended scene a plane starts shaking violently after take-off and several explosions tear a hole in its side, causing people to be sucked out of the plane and thrown about the cabin; we see blood splatter on a wall and then see fire roll through the cabin, causing a person's face to melt. A shard of glass flies into a person's throat and when it's pulled out we see lots of blood on the person's neck, hand and clothes and blood dripping on the floor; later, a knife falls into the person's chest and is driven deeper when a chair falls onto the handle (at this point the person is almost completely covered in blood). A large chain flies through the air and lops off most of a person's head; we see the head fall and roll on the ground, then see the body fall to the ground (the bloody neck stump is visible). A person is strangled after falling onto a clothesline that breaks at one end and wraps around the person's neck (we see the person struggling for a while and see the eyes bulging and getting extremely bloodshot). A person is hit by a speeding bus, causing blood to splatter on several people standing nearby; someone grabs a live power line and briefly gets electrocuted (we see the unconscious person lying on the ground with charred hands); someone is hit by a marquee (the screen turns black before we see the impact); and a person is knocked face-first into mud when hit by a falling tree and nearly suffocates. Some shoves, a punch, a boy elbows another in the mouth (a little blood is visible), a girl slaps a boy's arm several times and boys tackle each other. A few times people are knocked to the ground, usually by explosions. A plane explodes, causing several windows in an airport to shatter; fire spreads through a house and we later see it explode; and a car catches on fire with someone inside, but the person escapes before the car explodes. A driver speeds into oncoming traffic and also removes his hands from the steering wheel (the car is nearly hit by many other cars and a truck); also, a speeding train runs into a car (no one is inside). In several different scenes a person is nearly hit by a bus, a train, a car, a marquis, a pole, a tree stump and a power line. We see a corpse in a funeral home with thin, bloody cuts on its neck and a tube filled with blood sticking out of the side of its neck; someone removes the tube and we hear a squirting sound and see, in close-up, a little blood spurting from the hole. Someone pulls a bloody knife out of a blood-soaked person's chest. A boy gets a small, bloody cut on his neck while shaving. We see an aerial view of two boys sitting on toilets in adjoining stalls; also, we see another boy sitting on a toilet. Some scatological humor.

LANGUAGE 10 - About 50 F-words, several anatomical references and slang terms, lots of scatological references, some mild obscenities and an insult.

MESSAGE - Death is not accidental. Specific people are "scheduled" to die at specific times, but the schedule can be manipulated. 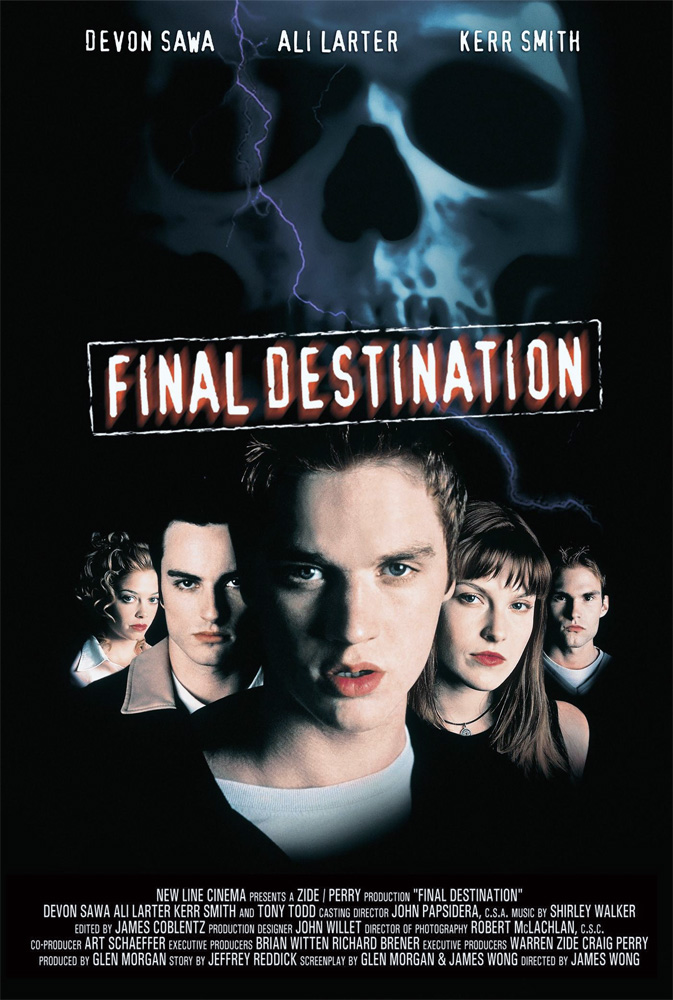