SEX/NUDITY 6 - Several instances of sexual innuendo. During the end credits, two men on a talk show graphically discuss masturbation for an extended period of time and also make references to their nipples' sensitivity, impotence and having intercourse with large women. In a nightclub we see topless women in thongs dancing together and sponging paint on each other's chests (one of the women presses her breasts against a glass window when a man asks her to do so). In another bar scene, we briefly see a topless woman riding a mechanical bull and two topless women in thong underwear on a man's lap (we can't see the man at first, only the women's backs; it's implied that the women are putting their breasts in his face). We see some shirtless men in a locker room, one man wears a towel around his waist, and a woman is in a midriff-revealing shirt.

VIOLENCE/GORE 9 - There are several gunfights and several scuffles and martial-arts fights with punches, karate chops, kicks and flips. In one scene a man and a girl are shot at, and in an extended scene lots of people in a motorcade are shot off their motorcycles, and gunfire is exchanged between a number of people on the ground and from a helicopter. A few people are shot in the chest (we see sprays of blood), a man is shot and falls out of a helicopter, a man is hit by a speeding truck (we see the impact), a man's face is thrown into the side of a car (we see some blood briefly), cars flip and sometimes explode, and a helicopter is shot at and explodes. Several men are shot and bullet holes are evident in their clothes. In another scene three men exchange gunfire and one man tries to hit another man with a chainsaw, one jumps through a glass window, and they all kick and punch each other (sometimes knocking each other down). In an extended scene, gunfire is exchanged between many people and several people are shot, sometimes repeatedly (we see a bloody hole in a man's forehead, a bloody hole in a man's neck, and bloody holes in men's torsos). A man climbing a helicopter ladder falls onto a pipe; we see the bloody pipe sticking out of his chest. Two men fight each other with long fabric-cutting blades and two others fight with guns, utilizing kicks, punches and blows to the head with gun handles; one person is stabbed in the leg, and a person's head is rammed into a ceiling sprinkler. One person is pushed and is stabbed in the neck with a pointy rod sticking out of a wall. During another fight one person is kicked in the crotch, and people are punched, kicked and have their limbs twisted. A man is hit in the head with a bat and a man is hit in the forehead with a knife handle. Another man is thrown through a car's rear window. In a fight scene in a nightclub, a man is kicked and propelled into a bar counter, and is then choked. Several men punch, kick, and twist each other's arms. A man is nearly hit in the head with a bottle, and a man shatters a bottle by squeezing it in his hand. A man wraps a chain around his fist and repeatedly punches another's face and neck (we briefly see the man's bloody face) and a man is thrown through a glass enclosure and appears to be unconscious or dead. A man is handcuffed in the back of a speeding van and is nearly injected with a poison; the syringe ends up in the van driver's neck. On a surveillance camera tape we see two people being threatened with guns; one is then shot and falls to the floor. A man hanging out of a van is hit by another car (we do see the impact). We see two men getting shocked by a stun gun as part of a bet, trying to prove who's toughest. At one point, one of the men twists the other man's arm behind his back and shocks him with the stun gun. There are several car chases: A car is bumped from behind by another car and runs into a truck -- we see the driver's face hit by the airbag. During an extended car chase lots of gunfire is exchanged between cars, and a car runs into the back of another car and we see the driver's face smash against the windshield; we then see the lifeless driver, his bloody face slumped over the steering wheel. A van hits many other cars, sometimes causing explosions, and eventually flips onto its roof and slides into other cars. A car drives out of a second-story car garage, several cars run into each other and nearly hit pedestrians, a man falls out of a car, a man on a motorcycle slides underneath a truck's lowered ramp, a car's top is sheared off by a truck's lowered ramp, a car runs into a brick wall, and a man jumps over a car speeding toward him. A fuel tank explodes and knocks a man out of a window and a man is handcuffed to the car's grill. Played for laughs: two cars run into each other and the drivers begin punching each other and a man reveals during a therapy session that he threw a dog out of a window. We see two adults and a child bound and gagged with duct tape. Many instances of threatening with guns.

DISCUSSION TOPICS - Police officers, undercover work, corruption, prison, being framed for a crime, drug smuggling, marijuana use (a reference to smoking a joint is made during the end credits). 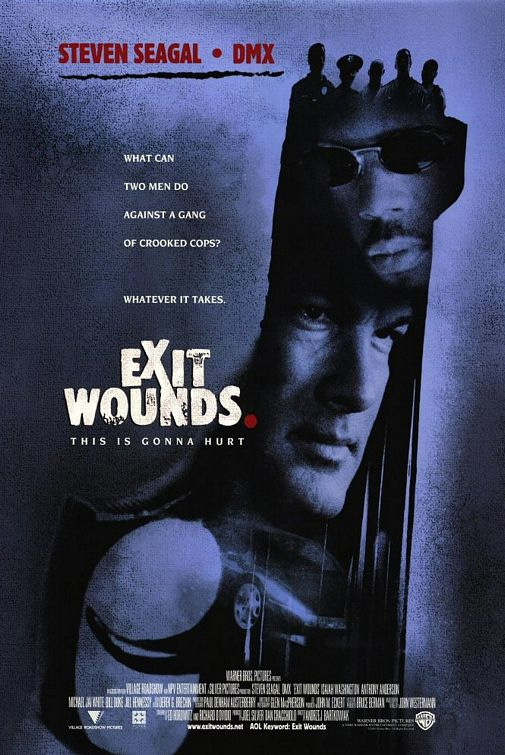