A meteorite carrying alien organisms lands in the New Mexico desert and the alien creatures begin to multiply and evolve at an alarmingly fast rate, threatening to take over the Earth. To the rescue come a community college science professor, his eccentric geologist buddy, a wannabe fireman and a government scientist. With David Duchovny, Julianne Moore, Orlando Jones, Seann William Scott and Sarah Silverman. [1:37]

SEX/NUDITY 4 - There's one romantic kiss. A woman begins to take off her shirt and we glimpse her bra and cleavage and a woman stumbles and we see the top of her garter belt. A man moons another man and we see his bare buttocks and heavily shadowed private parts. A man asks a woman to remove her shirt. Party scenes show women twirling their bras, bras dangling from a statue and a bare-chested young man. There is a lot of sexual innuendo, including language that can be translated sexually: a man grabs his crotch, there are references to foreplay and to people desiring other people, a man thrusts his hips and moans, a man is seen with a plastic doll, a man describes showering with the women's team that he coaches, a man has a bug extracted from his rectum (we see a flash of the man's bare hip) and a man makes a sexual reference about the procedure. A woman falls face first into a man's lap. A woman tells a man how she could have satisfied him sexually and a man and woman get into a fire truck while the man promises her satisfaction. A bug has a buttock-shaped behind.

VIOLENCE/GORE 5 - The army, in tanks, overruns a town in order to destroy alien lifeforms with napalm bombs; the explosions cause the lifeforms to grow rapidly into a huge worm which comes up from the earth and chases people, causes explosions and crushes people with its tentacles. A meteorite is shown hurtling toward earth; when it hits, it explodes leaving a few little fires and a huge crater, and a man runs as his car is hurled a great distance. A huge, growing, worm-like organism is seen in a lab. Lots of flatworms wriggle on the floor of a cave as a group of people walk amongst them; flatworms are seen splitting into two in a jar and worms ooze up from cracks in concrete. We see lots of bugs and creepy crawly creatures. A man steps on a bug and it squishes into slime and other bugs come and pick up the pieces. Alien creatures attack other creatures, and we see bugs eating and attacking other bugs. We see a bug crawling under a man's skin (a doctor threatens to amputate his leg but then extracts the bug from the man's rectum as the patient yells and moans). A creature attacks a group of people by jumping on them unexpectedly and hitting them in the face; it backhands someone (he is knocked down) and throws people in the air. A creature in a water-filled tank rushes against the side of the tank with teeth bared and scares a man peering in. A creature in a lake nearly bites a man's hand as he dips into the water and then the creature walks up from the water and grabs the man's legs and drags him into the water as he screams. We see the corpse of a creature. A seemingly cute creature opens its mouth and a hideous creature with a long neck and many teeth comes out and bites a woman's hand. Twice we see a field of dying dinosaur-like creatures. A creature vomits a sac and another creature breaks out of the sac. A creature flies into the plate-glass window of a store, runs through the store chasing people, grabs a girl by the back and flies through a mall with the girl dangling from its claws as people run, scream and some people are knocked down by the creature's dangling claws. A man shoves a hose into a creature's orifice which sucks up the man and he returns covered with slime; the worm explodes into slime and gobs of matter. A man shoots a creature many times and then three men shoot it a few more times and another creature is hit with objects and then shot many times. People are nearly caught in a cave as alien lifeforms grow. A man has a spot of blood on a bandage on his hand. A man tries to draw his gun to attack another man but is restrained, and a man tries to choke another man. A man puts a plastic doll into a shack and sets the shack on fire to practice a firefighter's rescue. A man is hit in the crotch and is shown holding ice on his crotch. A man chips at a meteorite and it oozes green slime. A man yells in another man's face.

MESSAGE - We were here first so can beat any interloper life forms with our intelligence and research. 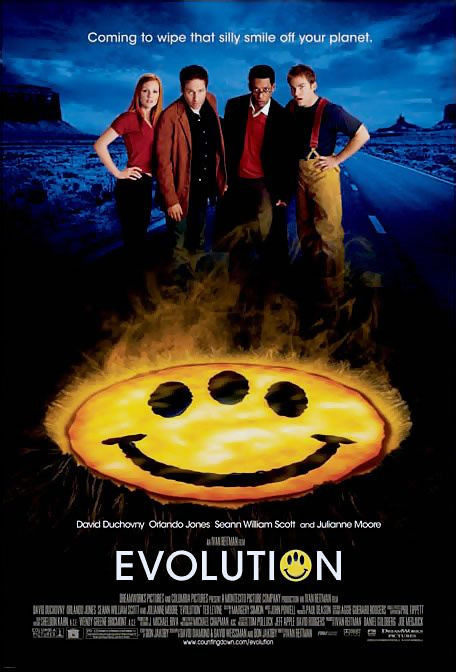