SEX/NUDITY 5 - Some sexual innuendo (including a brief reference to child molestation) and two kisses (one is passionate). In what turns out to be a dream, we see a man moving on top of woman in bed with another woman beside them, touching a sheet that's covering her genitals (her bare breasts are visible). We see the sides a woman's bare breasts as she changes her clothes; a woman wears a cleavage- and leg-revealing dress.

VIOLENCE/GORE 9 - Several shoot-outs and lots of threatening with guns (in one scene, a man holds a gun to his own head). Several people are shot (we often see some blood spray from the wounds; in one scene, a man's bloody wounds heal instantly); also, a man is shot repeatedly with a machine gun but lives, though we see a blackish-gray dent in his head where part of his skull has been blown off. We see a blood-soaked bed, then see a very bloody man strapped above it on the ceiling with what look like forks piercing his hands and feet. A man jumps onto a sword and impales himself and a man is stabbed (we see a knife sticking out of his forehead). In a flashback, we see men carrying a little girl and a woman into a bedroom, hear shots fired, then see blood sprayed on the walls and carpet. A subway train explodes and another runs into it; we see the only passenger cut in half on the track (both pieces are mangled, charred and bloody). We see a boy hit head-on by a bus and a man hit by a subway train; also, a subway trains runs over two people lying on a track (they're not injured). A man screams and runs after he's engulfed in flames (we see a close-up of his charred, burning face). We see a hand push a bloody organ out of man's chest, then pull it out of his back. We see a woman afflicted by stigmata (she's tied to a bed and her hands and feet are bleeding). A man's body shatters like glass. A man is thrown out of a window but holds onto the frame; another man pushes his hands into the broken glass on the frame (we see blood dripping from his hands and see the very deep, bloody cuts in a later scene). A man pushes a woman's head through a glass table, a man grabs another by the throat, a woman hits several men in the head with a shoe, a man is thrown down a staircase, a woman kicks a man in the crotch and a woman rolls a piano into a man. More scuffles, punches, choking and throwing; a man snaps another's neck. A man is surrounded by a group of people and beaten with a baseball bat, punched, kicked and thrown into a car window, then he's tied to a cross and raised onto the side of a building (he survives). Some chase scenes and two fall scenes: one man falls through a glass roof then gets up and runs (he's limping and his face is extremely bloody) and another is pulled out of a window and falls onto a car below. A man grabs onto and then falls off a moving car. A hand breaks through a floor and a ceiling, trying to grab a woman (it's shot at repeatedly). A man throws a woman onto an altar and we hear him ripping her clothes (nothing else happens). In two different scenes, a transparent liquid shape and a monster flow into a man's body, knocking him to the floor and throwing him against a wall several times. A few earthquakes (one nearly destroys a church) and several large, fiery explosions that cause lots of property damage and presumably kill many people. A huge monster breaks through a floor and growls at a man. A corpse has words carved into its torso, a corpse sits up and is then shot and a corpse is seen floating in a bathtub of bloody water. We see a tongue in a jar, then see bloody pliers next to it. We see a newborn baby covered with pieces of bloody goo. A snake is slit, squirting lots of blood, and some of that blood is fed to a baby (we see blood on its lips). We see a close-up of a man's facial cut being stitched; we also see a man whose eyes have been stitched shut. In a few scenes we see people with extremely bloody faces; in one scene we see a pool of blood on the floor. A woman imagines lots of tiny bodies squirming on an apple. A man urinates on some steps and we see it trickle along the sidewalk. Twice, a woman is restrained and nearly stabbed with a knife.

MESSAGE - Faith is the best weapon against Satan; self-sacrifice is sometimes necessary to save others from their deadly fate. 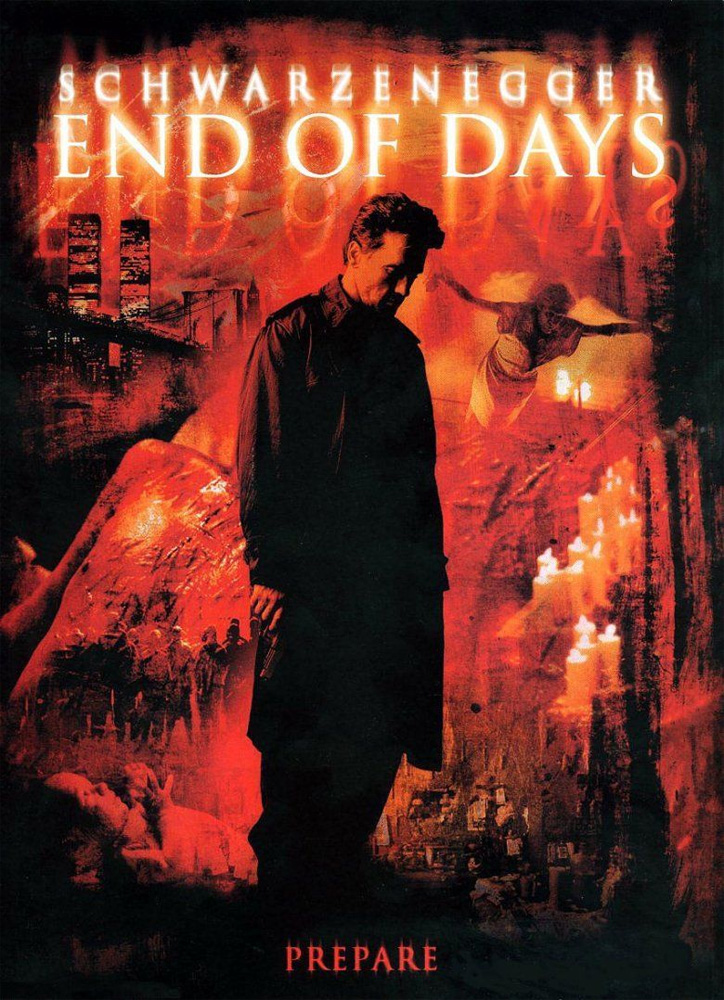