The main character in this animated feature is a cartoon Adam Sandler, with the real Sandler lending his voice to three different characters. The cartoon Sandler is Davey Stone, a 33-year old party animal who finds himself in trouble with the law after his wild ways go too far. In keeping with the holiday spirit, the judge gives him a last chance at redemption: he has to spend the holiday period performing community service as the assistant referee for the youth basketball league. He thinks he's gotten off easy until he meets the eccentric, good-natured head referee. Also with the voices of Jackie Titone, Jon Lovitz, Kevin Nealon and Rob Schneider. [1:11]

SEX/NUDITY 4 - A boy and a girl kiss. A man pretends to be having sex with his car; he grabs onto the wheel well, thrusts at the bumper and licks the window. A man admires and remarks crudely about a woman's buttocks as she walks away. A woman with three breasts is shown wearing a strapless evening gown in several scenes that exposes cleavage. An elderly man puts on a jockstrap and we see his hair covered buttocks. A man (an elderly man whose chest is covered with thick white hair) and a boy play basketball while shirtless. An elderly man shaves his hair-covered chest. A man talks about his morning erection and an elderly woman says, "I'd like to see it." An elderly man who appears delirious after being knocked out has his hand in his pants and talks about petting a kitty. Three babies nurse from a woman's three breasts. An animated bottle of vitamins flirts with an animated negligee (that is formed like a shapely woman). A man tells another man where he can find "furry underwear" (he says this loudly to embarrass him). A man's pants droop low exposing his buttock cleavage. A man says, "my wife was once a him."

VIOLENCE/GORE 4 - A man shoves an elderly man into a portable toilet and shoves it down a hill, it runs into a tree and the man climbs out covered with dripping feces; the man who shoved him sprays him with water and it freezes, deer lick the ice off the man and end up with feces-covered mouths and teeth. A man sets another man's trailer on fire. A man talks about his parents being dead; we hear that they were killed in a car accident. An elderly man is hit by lightning and we see him charred and smoldering. A man is chased by police after not paying his restaurant bill; he grabs a garbage can lid and snowboards through the streets, knocking people down, he squeezes a woman's melons (literally), he moons a group of carolers (we don't see his buttocks) and flatulates (we see a green cloud), he throws snowballs at deer, and takes a snowmobile and drives into two ice sculptures, breaking them. A man yells abusively at an elderly man, knocks him down and steals an elderly woman's wig. An animated coffee cup spits hot coffee on a man's face. An elderly woman kicks a man in the face, and then she puts his hand in his pants (we see his bruised eye). An elderly woman threatens a man with a baseball bat and nunchucks, and an elderly woman threatens to drop kick the teeth out of a man's head. A man slams another man in the head with a basketball and he crashes hard into the floor. An elderly man, trimming the top of a Christmas tree falls to the ground. A woman is frightened when a man comes into her house. A man kicks his boots off; one hits a light that shatters, and the other knocks a man unconscious. A man knocks another man down while playing basketball. A man talks about having been hit in the head with a hockey puck, having a metal plate in his head and having been in a coma. A man eats a jock strap. A line of men in white suits urinate on themselves (we see their white pants turn yellow). A man burps very loudly in several scenes, an elderly woman flatulates a few times, and an elderly man has seizures several times. A man gives himself a wedgie. A man is rude, insulting and boorish through most of the movie. A man teases a boy about being overweight. Children laugh so hard that they blow green goo out of their noses, deer laugh so hard that they defecate all over the place, a man laughs so hard that he pounds his head on a table.

SUBSTANCE USE - People are shown drinking alcohol to the point of inebriation. One man is shown trying to get into his car when he is obviously drunk.

MESSAGE - It's important to let go of our pain in order to find happiness and be able to love. If we are lucky, we can fix the mistakes we make.

(Note: There is a short entitled "A Day With Meatball" preceding the feature: A dog snorts and snores loudly, he eats children's lunches at school, he chases a boy on a skateboard, he chases boys playing baseball, we see him defecating on the floor, and he jumps up and hits his head on a punching bag and falls to the floor, A woman in bed wearing a bathrobe asks the dog, "what do you have in mind for desert?" and a Chihuahua is brought in on a platter.) 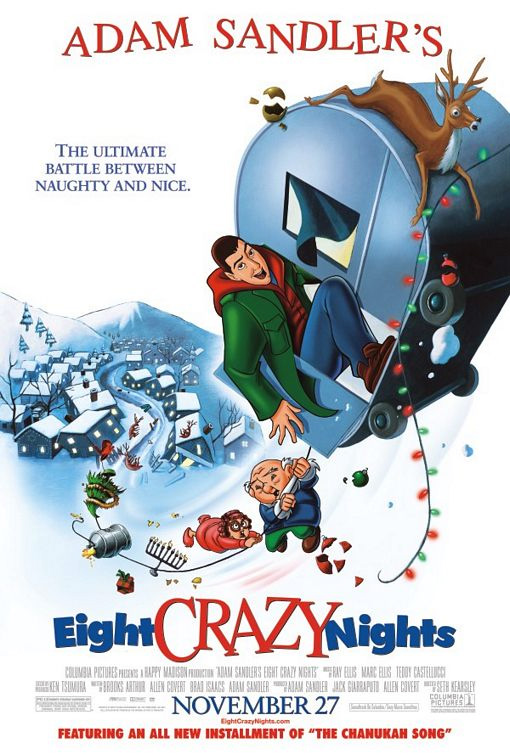