Prequel to "Dumb and Dumber" set in 1986, when mentally challenged best friends Harry (Derek Richardson) and Lloyd (Eric Christian Olsen) were teenagers. They meet for the first time on the first day of high school, and through many misadventures and misunderstandings they manage to uncover an embezzling principal's plan to make off with the special needs class grant money. Also with Luis Guzman, Eugene Levy and Rachel Nichols. Directed by Troy Miller. [1:22]

SEX/NUDITY 5 - A man and a woman kiss passionately and slip down to the floor behind a desk; when the woman stands up we see her zipping her blouse (part of her bra and cleavage are visible). A vertical slit opens on a black screen and we see the face of a doctor who is talking to a woman who appears to be delivering a baby, the slit closes, the doctor says the baby went back in, the doctor puts his hand inside, we hear a crunch and the doctor complains that the baby bit him. A young woman and a woman kiss in a "make-out" contest. A young man and a young woman kiss in many scenes (sometimes uninterrupted, in the background), a young woman and young man kiss and hug, and a young woman kisses a young man. A woman unbuttons her top and moves toward a man while making suggestive comments. Two women wearing low-cut tops and short skirts invite two young men to come with them to an "all-girl" school. A young woman touches her clothed breast with a pencil and a young man looks on thinking that she is making sexual advances. A woman kisses a young man on the forehead and he says that she made a move on him. A nude young man gets into a shower (his private parts are obscured by a table), he covers himself with toilet paper squares and stands in front of a fan (when the fan blows some of the squares off we can see his bare chest to the waist and part of his legs). Young women dress in a locker room and young men spy on them through a peephole (we see the young women in sports bras and panties). A young man's fantasy shows many women in bikinis (one woman has three breasts). A young man bends over and we see part of his buttock cleavage. A young woman wears a mini-skirt and when she bends over a young man remarks that, "She's not wearing any underwear." Young women wear outfits that reveal cleavage, bare abdomens, and bare legs, a few wear tight-fitting sweaters. Young men admire young women in several scenes. Cheerleaders wear short skirts that reveal their bare legs. Innuendo includes: A young man asks another young man, "Is that a banana in your pants?"; a young man talks about bringing his girlfriend to class and "doing stuff with her"; two young men talk about women's "jugs" and "milk bubbles"; a woman asks a man, "you got the extender?"; a young man asks a young woman "...you want to talk about your delicates?"; and a young man says "...he put his wiener in my ear" (talking about a hot dog). Young men talk about being interested in young women as being such a "fag thing," and a young man misunderstands an appointment with a young woman as a date to have sex.

VIOLENCE/GORE 4 - Two young men pour gasoline on a car, a man stands nearby smoking a cigarette, we hear an explosion and see a ball of flames: we see the man fall to the ground charred (he's alive). A young man is hit by a car and slams onto the hood and windshield (he walks away unharmed). Two young men run into each other and are both knocked to the ground; one has a broken tooth and the other has the piece of tooth stuck in his forehead). A young man runs into a goal post and is knocked unconscious, and a young man crashes through a wall. A school bus speeds over a hill tossing its riders out of their seats. Two young men ride a shopping cart through the streets, holding onto cars. A young man sits on a heater and his pants smoke (we see charred spots on his pants). A dog snarls viciously, barks and chases a young man. A woman and a young woman fight over a young man, slapping each other. Two young men fall through a ceiling and land hard on the floor (they're uninjured). A young man hits another young man in the crotch with a sledgehammer. Two young men are bullied: one is shoved in a garbage can and rolled down a hill, one is held by the neck, both are hung from a flag pole, and both talk about having been given wedgies. A young man tackles another young man (we see him with a black eye later). A man runs from police and is scooped up by a hook on a parade float. A man acts and talks to a young woman in a threatening manner; we see the young woman handcuffed to a chair. A young man is nearly hit by a car. A woman talks about killing people in a few scenes. A woman tells her son that a polar bear was shot by a hunter, just like his daddy. Two young men yell at each other in a few scenes, and a man yells at two young men. A young man drives a floor waxer down a sidewalk and people slip and fall on the wax. A car crashes into an unmanned go-cart (a boy's imaginary friend was in it). A young man puts his hand in the back of his pants, when he pulls it out it is covered with something brown and squishy (it turns out to be a melted chocolate bar), he tries to clean it up and smears it all over a bathroom and himself (we see the smeared bathroom again later). Two young men drink slushies and get brain freeze and eventually their faces and lips freeze and they drool. A young man is splashed with mud. A young man stands in front of a very powerful fan that blows him backwards. A young man talks about eating in the bathroom and says "out with the old, in with the new." A man licks a wall that is supposedly smeared with excrement (in the outtake reel). Two young men have gross eating habits: food on their faces, food coming out of their mouths, etc.. A young man flatulates a few times, (once for an extended time under water). A man says that he urinated in two beverages that two young men drink from.

SUBSTANCE USE - We see people drinking alcohol and a man smokes a cigarette.

MESSAGE - Friendship is a true treasure and even more important than high intellectual capacity. 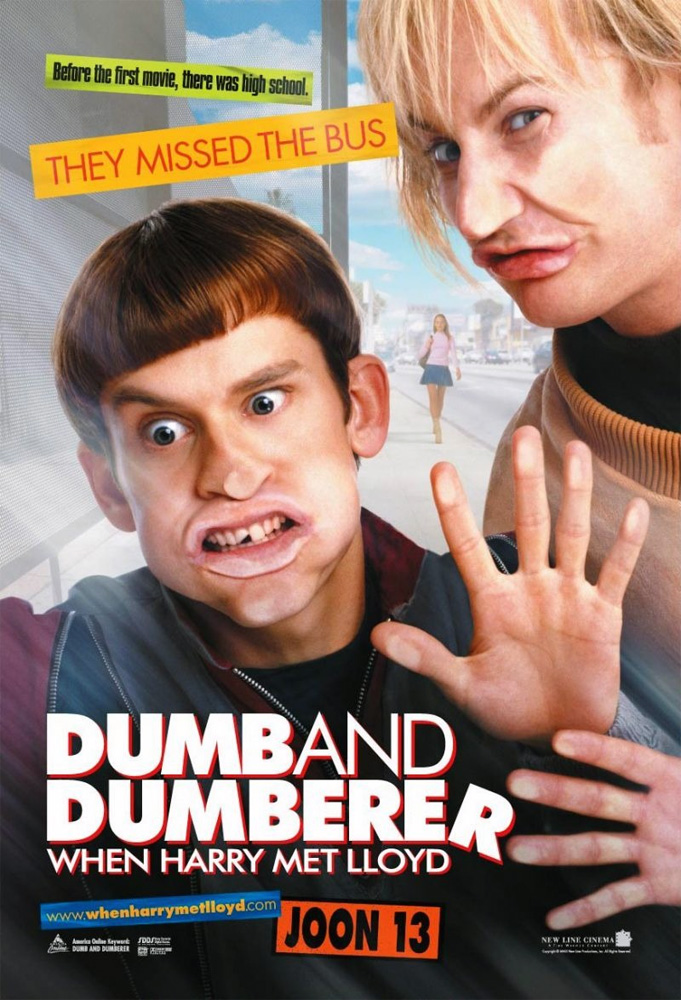