A divorced boat builder (John Travolta) has his hands full with a 12-year-old son who's rebelling against his mother's new romantic relationship by lying and getting into trouble with the police. When the boy comes up with a farfetched story about witnessing a murder, and accuses his new stepfather (Vince Vaughn), no one but his dad believes him. Also with Teri Polo, Steve Buscemi and Matthew O'Leary. [1:28]

SEX/NUDITY 3 - A woman and man are shown in bed in their underwear, presumably after having had sex. A woman wears a dress which exposes her bare shoulders and some cleavage -- she has a tattoo on her shoulder and the top of her breast. A woman makes a veiled reference to repeatedly having had sex with a man. A woman kisses a man, a man and woman kiss during a wedding ceremony, and a man kisses a woman on the nose. A reference is made concerning adult bookstores. A man talks to his son about girls, saying that they think he's cute.

VIOLENCE/GORE 6 - A man stabs a man in the back with an ice pick. A man drags a man's dead body out of a car and puts him into a brick kiln where we see the body engulfed by flames. A man holding a crowbar is shoved into an electrical box and he's electrocuted. A man hits a man on the back of the head and he falls to the ground unconscious, and a boy hits a man in the head with a bat and he falls to the ground unconscious (we see a bloody head wound). A man sprays paint thinner around a warehouse and sets it on fire causing several explosions (in the process his sleeve and arm catch on fire) while an unconscious man is inside. Two men fight with shoving and punching; they fall back through a table and it splinters, one throws a paint can at the other, one swings a shovel, one shoves the other's head through a car window breaking the glass, one swings a crowbar and the other uses a stool. A woman slams a car door on a man's arm, a man hits a boy across the face and he falls to the ground (we see his bloody cheek), a man throws a woman into a wall, a man punches a man in the face and he falls to the ground, and a man crashes through a glass door. A man slams a boy onto the hood of a car, ties his hands behind him and throws him into the back of a car. A man grabs a boy by the jaw and slams him into a wall while threatening him verbally, and a man shoves a boy into a wall and threatens him verbally. A man shoves a man, they nearly fight and one threatens the other verbally. A boy hides in the back of a car, witnesses a murder and is nearly caught by the murderer. A body bag is loaded onto an ambulance. A man drives recklessly and a police car cuts him off causing him to slam on the brakes. A boy climbs out a window and down a drain pipe. A boy throws a baseball through a glass window, breaking it. A man throws a baseball hard at a boy while they are playing catch. A man speaks abusively to a boy. There is a reference about a woman having had a miscarriage.

LANGUAGE 5 - 3 F-words (one is mouthed but is dubbed and we hear "fooling" instead), 10 scatological terms, 1 anatomical term, 12 mild obscenities, 3 religious profanities, 15 religious exclamations and some insults.

MESSAGE - Not everything is what it seems. New stepfathers can be very dangerous. 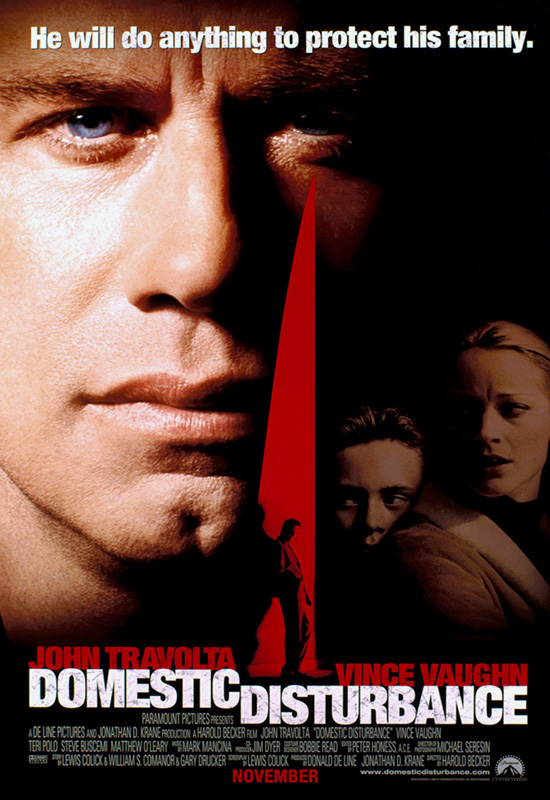