Movie adaptation of the video game series "Dead or Alive": A mysterious man hosts a competition among the best martial arts fighters on a remote island. Men and women, each with a unique fighting style, are invited to partake in the contest, and as the numbers of fighters dwindles it is clear that their host has an ulterior motive. With Natassia Malthe, Jaime Pressly, Devon Aoki, Brian J. White and Holly Valance. Directed by Corey Yuen. [1:27]

SEX/NUDITY 5 - A man lies clothed on a woman's bed, and she comes out of the shower wrapped in a towel, sits on the bed, rubs lotion on her legs, removes her towel and lies back on the bed (we see her bare shoulders); they kiss and it is implied that they have sex since we see them lying in bed together later, with sheets up to their shoulders.
► A man tries to seduce a woman in a hot tub: he rubs her shoulders and speaks softly to her, she tells him to close his eyes, she removes his pants under water (we see flesh tones with no detail), and then she leaves him there.
► Four women wearing bikinis (the camera lingers on their cleavage and thighs and buttocks several times) play beach volleyball while men watch -- one man watches on a computer screen and appears interested in one particular contestant. While fighting with three men a woman drops a towel wrapped around her (her bare back and part of the sides of her breasts are visible). A woman bathes in a tub filled with flower petals (her bare shoulders are visible) and when she stands up to get out of the tub we see her bare legs, hip and back. A woman steps out of the shower wrapped in a towel, a man watches her slip on a pair of bikini panties and hands her a bra (her bare thighs, shoulders and cleavage are visible). When a man falls into a hot tub, a man who was in it jumps out and it becomes evident that he is not wearing trunks (his bare hips and thighs are visible and he cups his hands over his genitals). A bikini clad woman climbs out of the sea and onto a ship (her cleavage, bare abdomen and bare legs are visible). A woman wearing a bra and panties gets on an elevator with a man who admires her (please see the Violence/Gore category for more details). A bikini-clad woman hangs from her ankles and does crunches. Men and women are given physicals: we see the men bare-chested and the women in underwear, and we also see X-ray images of both men and women (the women are shown with clear outlines and shading of breast muscles).
► A man and woman kiss in a few scenes. A man kisses a woman's hand and she pulls away from him.
► Two women are in bed together and a man enters the room to find them and thinks they are lovers (one says they are only sleeping, and one of them pretends that they are lovers).
► A man massages a woman's bare back. A woman caresses a man's face and lips.
► A woman tells men and women who are hugging and kissing to "get a room."

VIOLENCE/GORE 5 - A man is stabbed with a small needle, he's immobilized and we see him engulfed in flames when there is an explosion.
► A man fights many guards, breaking necks and throwing several down stairs, and one is struck with a heavy sign (there is no blood shown but we do see bodies falling limp to the floor); many more guards with swords charge him and he continues to fight.
► Two men fight: one is kicked repeatedly and knocked to the floor, he is then kicked and falls over a balcony, dropping several floors before being caught.
► Five women with swords charge toward a large number of guards, also with swords, and the scene ends. A woman with a sword breaks through a wall and a mirror and slashes at a woman who fights back; they fight briefly but are interrupted before finishing the fight. A woman with a sword slashes at another woman, they fight, the woman's robe is slashed, her sword is pulled out of her hand and the fight is interrupted.
► Several gun-toting men on a boat board another boat and threaten a woman who's onboard; she punches and kicks each of the men, one man's arm is broken (we hear crunching) and they all end up overboard (no blood is visible and no one is killed).
► Two men hold each other's throats, and one is struck by others with metal pipes. A man slams a man's head into a table twice. A man is knocked unconscious by a statue.
► We see several fights between competitors (male and female), with punches and kicks, and we see several knockouts (no blood is shed). A woman kicks a gun out of a man's hand; she kicks two other men and strikes one on the head with the gun.
► A man fights with four women: he falls over a railing, holds onto it while it begins to pull free, and he manages to get back onto solid floor safely. Two women are pulled off a balcony, and they grab onto beams to get back to safety.
► A man and a woman fight: she throws furniture at the man, kicks and punches him, and he throws her into walls, while many things are broken.
► A woman remembers being held captive, bound and gagged, and a man freeing her by fighting with her captors and disabling them -- or possibly killing them -- using small acupuncture needles.
► A father and daughter fight: they kick and punch, one is bitten on the leg, and one is thrown off a boat and into water.
► A man is thrown over a balcony and crashes into a hot tub (it is suggested that he is OK).
► Several men and women jump out of a structure and fall toward the sea as the structure explodes; others slide down a chute that's inside the structure. Several people on a plane in flight are told that they must exit using parachutes, and we see three women jump out and land in the sea near an island.
► Several women and a man are restrained and locked in capsules where they thrash. A woman gets off an elevator and we see a suitcase left inside; a man has been stuffed inside the suitcase and we hear him struggling to get out and calling for help.
► Three women climb a sheer rock wall, one hangs by her knees to help the others up to the top, one woman breaks through a railing and falls, and the other two catch her and pull her back.
► A woman grabs a man by the crotch and squeezes (we hear crunching and see the man grimacing).
► Men and women work out and train for fights in several scenes.
► A woman is injected by a large needle that releases "nanobots" into her blood stream (we see the needle puncture her skin and see the nanobots swirling).
► A man confesses to killing a woman's father.

SUBSTANCE USE - People are shown drinking alcohol in a few scenes, a man and a woman drink champagne and a man holds a glass of champagne (we do not see him drink).

MESSAGE - Sometimes the only way to succeed is by doing things as a team. 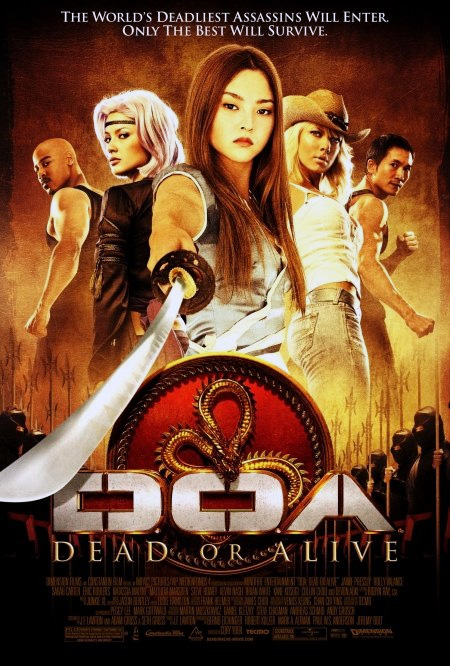