After a new villain (voiced by Jason Segel), with a wealthy dad and many gadgets, steals the pyramids in Egypt and replaces them with inflatable versions, an older and more established villain (voiced by Steve Carell) must prove he still has what it takes to claim he's truly an arch villain. However, when he adopts three little girls in an attempt to infiltrate the new villain's lair, he finds out that being a dad changes one's perspective and priorities. Also with the voices of Russell Brand, Will Arnett, Kristen Wiig, Danny McBride, Jemaine Clement, Jack McBrayer, Julie Andrews, Miranda Cosgrove and Mindy Kaling. Directed by Chris Renaud & Pierre Coffin. [1:32]

SEX/NUDITY 2 - The shadowed outline of a man is seen and it is implied that he is nude as he quickly places his hands over his groin (no nudity is visible). A man thrusts his hips in a suggestive fashion while dancing by himself.
► Several girls are shown a black and white photo of a baby boy's bare buttocks. We see what appear to be photocopies of pill-shaped-creatures' bare buttocks after seeing one of the creatures sitting on top of a copy machine with his overalls around his ankles.
► A man's boxer shorts are visible after his pants are accidentally pulled off, and he walks around nonchalantly in his boxer shorts.

VIOLENCE/GORE 3 - Most scenes of violence are played for laughs, but some can be tense: Two girls and a man have a look of shock on their faces when a red liquid pours out of a nail-lined coffin after a girl slams herself inside; moments later the coffin opens and the girl shows that it was due to a juice box leaking; a man flying a spaceship uses a jolt of electricity to knock another man off the windshield of a spaceship; the man falls to the ground and then hits a power line and is electrocuted but is later seen unharmed; a group of girls leap from one spaceship to another, in mid-air, the last of the girls falls and catches onto a wire, the wire snaps but she is grabbed out of the air moments before she falls to the ground.
► A dog-like creature bares its large fangs at a man and bites his arm: the dog dangles from his arm, its jaws clenched. A dog-like creature with large fangs growls and tries to nip at a young girl, but the young girl ignores the dog. A man fires a gun and a piranha comes out of the muzzle and bites the man on the nose; on a different occasion a man fires a gun and a squid comes out of the muzzle and a man is heard shouting that he has been hit by a squid.
► A young boy runs up a multiple-story-high ramp, falls off, landing on a giant inflatable pyramid, bounces, flies through the air, and then lands on top of a man, knocking him to the ground.
► Tanks are seen surrounding the Great Wall of China, a bird flies off screen and the tanks are heard firing and feathers are seen flying through the air.
► A pill-shaped creature hits another pill-shaped creature on the head with a hammer. A group of pill-shaped-creatures pull out weapons (large guns, knives, and missiles), one fires a small rocket into the crowd and a small explosion sends five pill-shaped-creatures flying through the air. Pill-shaped-creatures are seen being slammed against the ceiling, and pill-shaped-creatures bang one another against a computer screen and keyboard. A pill-shaped-creature falls off a crane while two creatures are seen hitting one another in the face with a wrench, as well as hitting and punching one another.
► As a man attempts to spy on another man in a house, and boxing gloves are deployed, which hit the man in the stomach and face; a series of missiles is also fired at the man (he is struck by the last of the sequence and is seen in a hole in the ground with his face covered in soot).
► An elderly woman kicks a punching bag, sending a man that's behind the bag flying through the air. A young girl kicks a door, and the man that's standing behind it yelps. A young girl kicks a man in the shin. A young girl throws a roll of toilet paper and hits a man in the head.
► A man drives a large truck erratically, crashes into a line of cars while trying to park and knocks a man sitting on a guardrail off the side of a cliff.
► On multiple occasions people are seen being shot with a "freeze-ray" that temporarily turns them into giant icicles, including one time when a young girl fires the freeze-ray at a man, turning him into a block of ice, except for his head and a small portion of his backside.
► A young girl holds her breath until she passes out after another girl disintegrates the young girl's toy with a ray gun.
► A giant ball rolls across a room and smashes a man against a chair and against a doorway, and later is seen exploding in the distance (the man is unharmed). A spaceship hits a pill-shaped-creature as it floats through the air.
► Two ships chase one another through the air, one of the ships opens fire with about two dozen missiles, and the second ship avoids all of the explosions and fires a large gun that rapidly shrinks the first ship (no one is injured). A man flies a spaceship while being chased by another spaceship, a missile is fired but nobody is struck. A man is almost accidentally run over by a bus.
► A man kidnaps three girls and, as the girls are crying, tells another man that he will never get the children back.
► A woman shouts at a group of girls, threatening that they will have to go to the "box of shame," pointing to a cardboard box; on two different occasions, eyes are seen in the "box of shame," implying that a child is inside the box for punishment.
► A man smashes an apple in his hand and implies that he would do the same to another man's head. A man tells another man that he is in for "a world of pain" and a young girl chimes in that the man is going to "kick your butt." A man teases three girls that they are sleeping in old bomb, stating that it is "highly unlikely" that they will explode, and that they need to be aware as they sleep, since the room is filled with bedbugs and there is a monster in the closet.
► A man shoots a piece of popcorn out of his nose. A man makes gagging noises and holds his hand over his mouth to prevent himself from vomiting. A teenage boy is seen picking his nose and wiping his finger on his behind. A man jokes with another man that a dog cannot leave "bombs" in a person's yard if the dog is dead. A taxidermy lion is seen with an animal in its mouth, and in the mouth of that animal is another taxidermy animal. A man shows another man a gun that fires a loud, smelly cloud and they imply that it is named "fart gun."

LANGUAGE 2 - 3 scatological terms (not including), 1 mild anatomical term, exclamations (shoot, gah), name-calling (lame, monkey, saying that a boy looks like an ugly little girl, happy meal, duck, insane), a man tells a woman she has a face "como un burro" (the uncomprehending woman assumes it is a compliment).

SUBSTANCE USE - A giant can of beer, labeled "The Big Beer," is seen as a television report identifies it as a "notable landmark."

MESSAGE - Becoming a parent can change a person for the better. 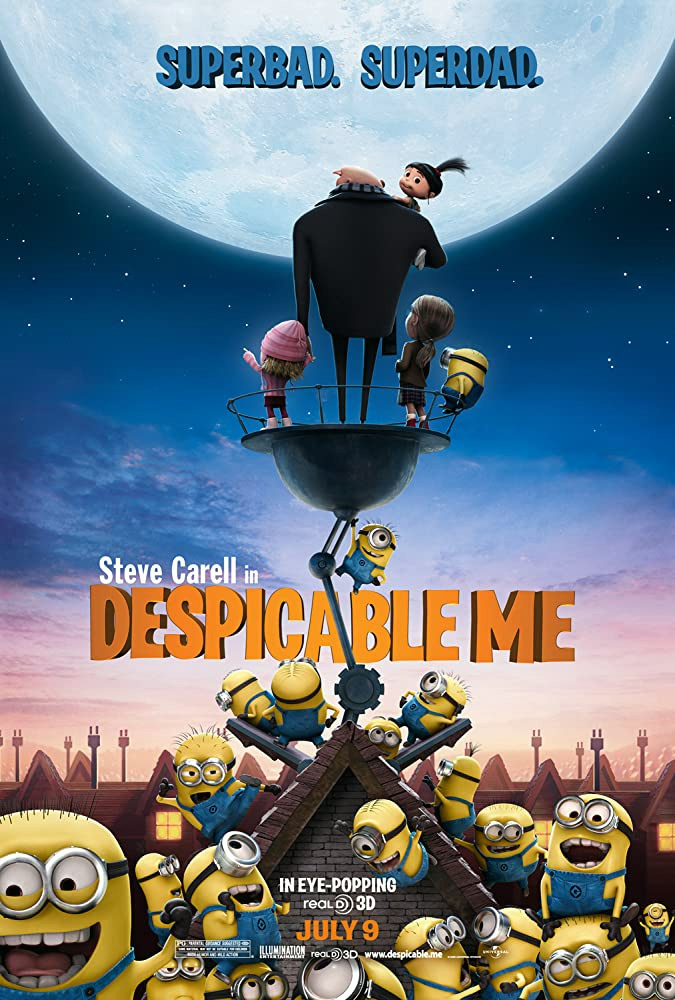