A young woman (Anna Paquin) and her family take up residence in a large house in Spain, but shortly after they arrive very unusual things begin to happen. As they try to figure out what's going on, they begin to doubt their own capacity to tell reality from fantasy. Also with Lena Olin, Iain Glen, Stephan Enquist and Giancarlo Giannini. Directed by Jaume Balaguero. [1:42]

VIOLENCE/GORE 6 - A man gags and gasps after a pill gets lodged in his throat, a woman straddles him and prepares to perform a tracheotomy: the blade comes close to his throat, she is unable to do it, a young woman takes the blade, cuts (we hear a crunch), we hear more gurgling and he is pronounced dead. A man on a train sees a figure (a decayed, flesh-toned human form) sitting across from him; when the train goes through a tunnel we hear the man yell, he finds himself walking through a train station, and the hallway becomes dark and eventually he is enveloped in darkness and we hear him yell again. A woman stands in a darkened kitchen with a lit stove burner for light, she turns the burner off and we hear her scream. A car with three people inside drives into a dark tunnel and the screen goes black. We see a young boy with many dark bruises on his face, and his mother locks him in a room; his father pounds on the door from outside, and the woman holds a razor in her hand. A young man is injected in the chest with a syringe, he yells and falls to the floor unconscious. A young woman is tied to a chair and a cloth is placed over her mouth. A young woman hears a noise, she follows the noise into a darkened hallway, she finds that a photograph has fallen off the wall and when she picks it up one of the people in the photo is no longer there -- at the same time we see a figure (a decayed, flesh-toned human form) dangling from the ceiling and moving slowly over her head. A woman transforms into a decayed, flesh-toned creature and leaps up to the ceiling and skitters away. A man talks about a ritual that requires the throats of seven children to be cut and their blood mixed in order to revive an evil spirit. A man slices potatoes, he becomes angry, he slices frantically, and he cuts himself (we see a bloody cloth wrapped around his hand). A man pounds on a TV set and yells in anger. A boy sits in his bed, his father turns off the lights and closes the door, and the boy breathes heavily and is frightened when a toy in the room begins to move on its own and he hears noises. A boy is trapped in his room (his door will not open), we see him pressed against the door as darkened figures move toward him, and he cries for help; his sister pounds on the door from the outside, then his father pounds on the door and yells and the boy inside becomes very frightened. A young woman answers a telephone, and she hears voices of children talking (they say "we're watching you"), laughing and calling her names; she hangs up the phone and is startled when it rings again. A man in a car has a seizure, he gasps for air, another man pulls him out of the car and tries to perform CPR, and the stricken man's young son watches in terror. A young woman pulls up the floorboards to reveal a fresco of writhing snakes in a circular pattern. A young woman comes home to find an ambulance taking her father to the hospital. A boy runs through woods with blood on his face. There are several scenes where we see flashes of dark figures moving through darkened hallways and people react to the movement and go to investigate (nothing else happens). There are several scenes when we see the silhouettes of several children standing in darkened rooms, observing people in a house. We see quick flashes of scenes of frightened children screaming, children huddling in a darkened hallway, and a man walking ominously down a darkened hallway (these are repeated throughout the movie). A boy places pencils on a floor and they roll under his bed, causing him to look under the bed where we see a black mist floating (this happens in several scenes). A boy has bruises on his neck and face in a few scenes and it is suggested that his father has been beating him (this is not the case). A man gets very angry with another man, he yells at him and then pounds on a door after he leaves. A young woman and her mother argue bitterly. A young woman hears voices and is startled. Family members are startled and appear frightened when lights flicker in several scenes. We see a creepy photograph of three people wearing dark glasses in several scenes. We see headlines in newspapers in several scenes that discuss the unsolved disappearances of seven children. A young boy draws pictures of children with red slashes across their throats. A young boy says, "the dark eats my pencils." A man talks about hearing larvae talking and whispering, and he takes a pickaxe and begins tearing up the floor of his house in order to "find their nest." A man tells a young woman that her young brother is in danger. A young woman talks about there being something wrong with their house. A young boy asks his father if he is going to die. We see a brain scan very briefly and people discuss a man's illness that causes him to have fits of rage and aggression. There are many instances when the anticipation of something horrible happening builds and then wanes.

SUBSTANCE USE - People are shown smoking and drinking.

MESSAGE - There are reasons to fear the dark. 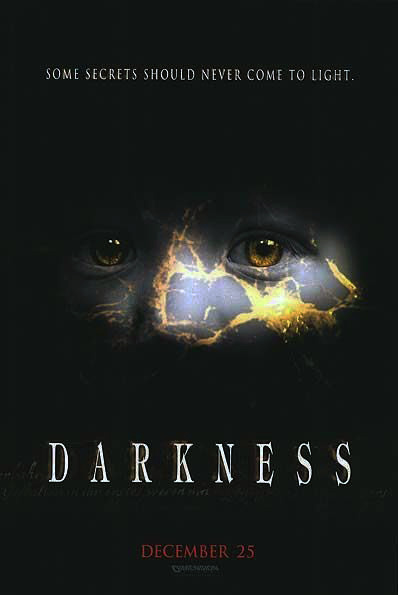