Why is “Crimes of the Future” rated R? The MPAA rating has been assigned for “strong disturbing violent content and grisly images, graphic nudity and some language.” The Kids-In-Mind.com evaluation includes several fully nude women, a few implied sex scenes, moaning and apparent arousal during surgical procedures, the murder of a child by his mother, many scenes of people being cut and the wounds visible with blood and some internal organs visible, discussions of the evolution of human functions, a few arguments, and at least 3 F-words and other strong language. Read our parents’ guide below for details on sexual content, violence & strong language. Set in a very dark and gritty future when human organs seem to be genetically mutating, a man and a woman (Viggo Mortensen and Léa Seydoux) perform live surgery as performance art that features the removal and display of the newly formed organs. Also with Kristen Stewart, Scott Speedman, Tanaya Beatty, Lihi Kornowski, Denise Capezza, Don McKellar, Nadia Litz, Yorgos Pirpassopoulos, Welket Bungué and Sozos Sotiris. Directed by David Cronenberg. [Running Time: 1:47]

Crimes of the Future SEX/NUDITY 7

– A fully nude woman (bare breasts, abdomen, pubic hair and legs are shown) lies in a module where a man adjusts mechanical arms (please see the Violence/Gore category for more details); the woman moans sexually when the device cuts her a few times, the man removes his shirt (we see his bare chest and abdomen) and we later see them lying entwined as if after sex (we see them fully nude but no genitals or breasts are visible). A man lifts his shirt to reveal a large horizontal opening with a zipper closure; a woman pulls open the zipper and licks and kisses the area causing the man to moan sexually.
► Two women undress and climb into a module together (we see their bare breasts, abdomens, buttocks, legs and the pubic hair of one while the other seems to be shaved). A young boy’s body is shown wearing shorts and we see his bare chest, abdomen and back. A woman wears a low-cut top that reveals cleavage. A man wearing only briefs is shown during a performance (we see his bare chest, abdomen back and legs to the hips).
► A woman caresses another woman’s face tenderly. A woman touches a man’s mouth, opens his mouth, puts her fingers inside and touches his teeth; she then kisses him and he apologizes saying that he isn’t very good at the “old sex.” A man and a woman kiss passionately.
► A woman tells a man that she imagines herself in a module with the man at the controls (implying a sexual encounter). A woman tells a man that while watching a performance art surgery, that she wanted the man to be cutting into her (she seems to be aroused by the idea). A woman standing in a dark alley with two men moans sexually as one man draws a knife blade along her shoulder (we see a bloody wound open). A woman cuts the top of another woman’s foot and we see blood as they both moan sexually. A man describes a woman as being, “Rather attractive in a bureaucratic way.” People talk about surgery and pain being the “new sex.” A man tries to convince another man to enter an “inner beauty pageant.”

Crimes of the Future VIOLENCE/GORE 8

– A woman places a pillow over her young son’s face to smother him while he sleeps and the boy thrashes and then stops; we later see the boy’s body as a man grieves over him. A man’s head is drilled into from behind and we see blood gush from the wounds as he tumbles down a flight of stairs. A man is shown seated in a chair with blood dripping from a hole in his temple.
► A young boy’s body is shown in a module during a performance art display as a woman describes the boy’s murder by his mother and blades cut his abdomen open; we see organs inside. During a performance art display we see a man having his eyelids and mouth stitched shut with a curved needle and heavy thread (no blood is seen); he also has numerous ears attached all over his body as he dances and writhes in front of a crowd. A man lies inside a device during a performance art display and we see hatches opening to reveal parts of his body as automated arms with scalpel blades attached to them move around his body and cut his flesh and then other arms pull the incision open to reveal his organs (we see blood, tissue and organs); another bladed arm cuts out one organ and holds it outside the man’s body as a crowd watches and records the events and a laser device closes the wound (we see some smoke from the cauterized flesh). A fully nude woman (please see the Sex/Nudity category for more details) lies in a module where a man adjusts mechanical arms and accidentally cuts her (she moans and we see bloody cuts); we later see them both in the module each with numerous bloody cuts as they lie entwined (as if after sex). A man lifts his shirt to reveal a large horizontal opening with a zipper closure (please see the Sex/Nudity category for more details). A woman makes several cuts on another woman’s face during a performance art display and we see blood (we later see her face with what resemble gills on her cheeks and slashes across her forehead). A woman is shown with crescent-shaped implants under the skin of her forehead.
► A woman standing in a dark alley with two men moans (sexually) as one man draws a knife blade along her shoulder (we see a bloody wound open). A man cuts a woman’s thigh as she sits in a dark alley (we see blood). A woman cuts the top of another woman’s’ foot and we see blood as they both moan (sexually). A man and a woman insert tubes into a man’s abdomen (we see the openings, the flesh moves around the tubes as they adjust their view and we hear squishing sounds) to examine organs in his abdomen.
► A woman talks about watching a woman’s face being cut, filling her with the desire to cut her own face open. People talk about a device that conducts autopsies and we see that it resembles the head of a large dinosaur. A module that resembles the shell of a giant beetle hangs from a ceiling by what looks like tendrils and the tendrils are attached to a man’s hands feet and legs while he sleeps inside the module; the man moans and coughs (we are told that the module helps to mitigate the man’s pain). A woman attaches suction tendrils to a man’s hands while he lies in a module. A man sits in a chair that resembles a skeleton and it moves and shifts presumably to help the man chew and swallow his food (the man gags and makes clicking sounds with his throat). A ship lies on its side partially covered by water as a child digs in the sand nearby.
► A man takes a bite from what looks like a chocolate bar, he gasps and gags and drools and vomits purple goo as he falls to the floor, thrashes and apparently dies. A woman scans a man’s abdomen with a scope and says that she sees what looks like a brand new endocrine gland. A young boy bites pieces from a plastic wastebasket and eats them; we see a white substance coming from his mouth as he chews and swallows. A man tells another man that he should use his dead son’s body to perform a live autopsy on; the man opens a chest freezer and we see the body of a young boy inside with discolored flesh. A man is shown trying to eat and swallow food in several scenes and he gags, makes clicking sounds and clears his throat repeatedly.
► A woman tells her estranged husband on the phone that he should come get the body of his dead son. A man says that human evolution is going wrong and that it is insurrectional. People talk about an organ registry and tattooing newly formed organs.

Crimes of the Future LANGUAGE 5

Crimes of the Future SUBSTANCE USE

Crimes of the Future DISCUSSION TOPICS

Crimes of the Future MESSAGE 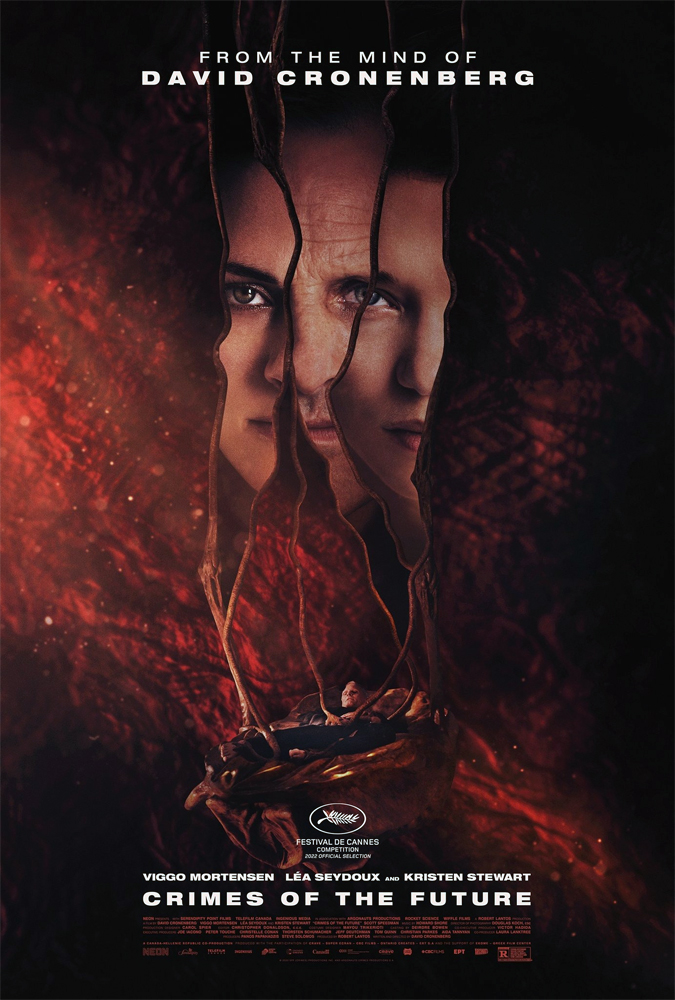