Four couples take a long-awaited vacation on a tropical island, but soon realize that the highly acclaimed resort is not what they expected: One couple is there to work on improving their marriage, but the others are there simply to have fun, and don't know that participation in the resort's therapy sessions is not optional. With Malin Akerman, Vince Vaughn, Jason Bateman, Jon Favreau, Kristin Davis, Kristen Bell, Faizon Love, Jean Reno and Carlos Ponce. Directed by Peter Billingsley. [1:47]

VIOLENCE/GORE 4 - Two men swim with very small sharks, and one man panics and spills a bucket of cut up chum into the sea, spreading blood, and as the sharks come to investigate the men swim toward a boat; the second man becomes angry, says it's time to get guns and shoot fish, and tells everyone in the boat to save themselves (he later claims that shark teeth penetrated his skin and we see a short pink scrape on his knee).
► A man sees another man dancing with his wife, he charges over to them and punches the man in the face, making him fall backward (we do not see any physical damage); the husband and his wife argue briefly.
► A man tosses pebbles against a window of a friend's house setting off burglar alarms; the man inside the house gets a handgun, loads it, goes downstairs and the first man opens a door, his friend lowers the gun and they argue briefly.
► Throughout the film, four couples argue with marriage counselors several times: One argument escalates briefly as a man points and tells the therapist he might shoot him in the head to get an answer; in another session, a man tells the therapist that the marriage is fine because there is no domestic violence and the wife agrees; three couples argue several times with a fourth couple and later we see wives slamming bedroom doors and locking their husbands out.
► Four men and three women in canoes find one man's girlfriend, they argue as to whether she is dead, and during a storm two women fall overboard.
► Two men play dueling Guitar Hero, with some sparks flying from one of the guitars. Male dancers twirl flaming torches at an outdoor dinner as they dance with stomping movements. A flaming dessert fills the screen in a brief close-up.
► Servers and attendants are shown to have tattoos on their necks, shoulders and biceps that depict wild animals. The entire front of a T-shirt of one customer shows the large face of a roaring open-mouthed tiger with sharp teeth in close-up.
► Twice in a department store, a 3-year-old boy uses a demonstration toilet on the sales floor: The first time, we see a stream of urine entering the toilet and the second time he is shown sitting on it with his pants at his ankles.

SUBSTANCE USE - Alcoholic beverages in bottles and glasses are seen in many scenes on beaches, in restaurants, and in bars: in a party scene at a swimming pool bar we see a few people drinking, two people drink from beer bottles, three women at a children's birthday party pour white wine and drink several times, men are shown with beer bottles, people dance at an outdoor bar at night while drinking cocktails and beer, a man drinks shots of a neon-blue liquor, a woman complains that she is bored and wants to "do shots" (she leans back over a serving bar with her mouth open and two men pour liquor down her throat), a man approaches three women and gives them rum (which they drink, they giggle, one coughs and they are shown getting up and staggering slightly), ands a husband and his wife drink beer. A man tells his massage therapist to leave him by saying, "Go have a smoke."

MESSAGE - Couples retreats don't work if the couples can't get along. 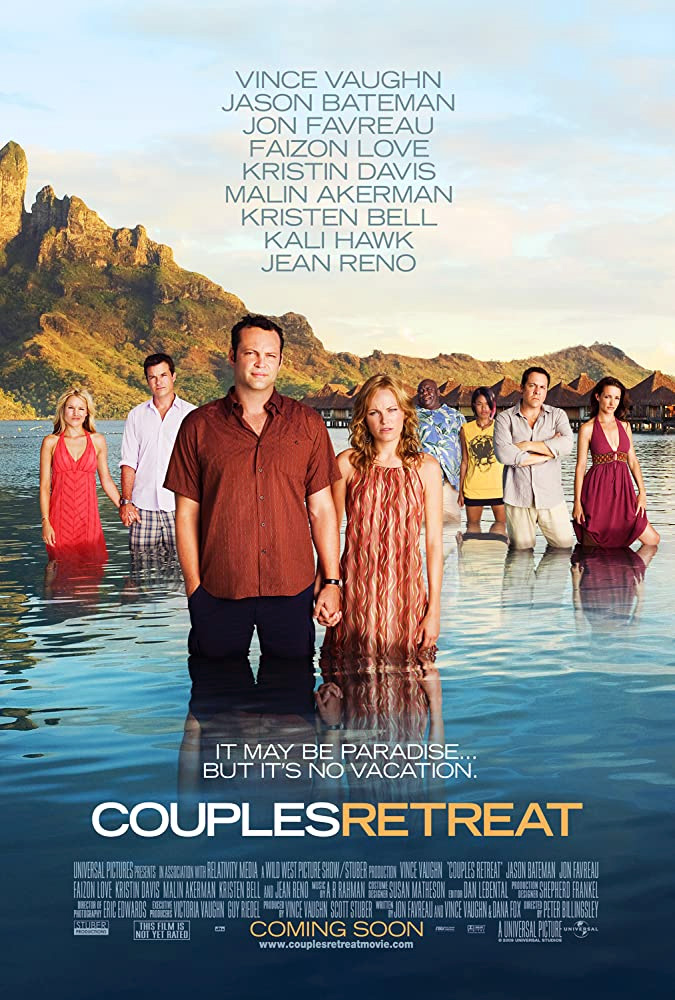