From the time he was a young boy, an inventor (the voice of Bill Hader) living on a small island where fishing and selling sardines is the main source of income for the community, has been dreaming of making a difference. Unfortunately, nothing he comes up with works the way he intended. However, when the market for sardines dries up, he is determined to create a machine that will convert water into food. Also with the voices of Neil Patrick Harris, Anna Faris, James Caan, Andy Samberg, Bruce Campbell, Mr. T and Bobb'e J. Thompson. Directed by Christopher Miller & Phil Lord. [1:21]

SEX/NUDITY 1 - A man and a woman lean toward each other and kiss (they both blow out their cheeks as they touch their lips together). A man leans toward a woman and puckers his lips, she asks what he's doing and they get on with their conversation.
► A man and a woman go on a date; they walk together and talk and nearly kiss. A man calls a woman "that little cutlet."
► A man pulls off a sweat suit in several scenes to reveal his bare chest, abdomen and back and we see that he is wearing only a diaper. We see a Jell-O stature of David (nudity is not obvious).

VIOLENCE/GORE 3 - Large, headless, roasted chickens walk toward three people, they surround one man and one chicken eats him (we see the man being "swallowed" into the chicken; he's OK later).
► A man falls into a deep tunnel that has pointy shards of peanut brittle lining the walls (he is not harmed).
► Large Gummy Bears tear up an airplane while it is flying, the plane spins out of control, and a monkey attacks the bears kicking a few off the wing and punching one in the chest (we see the monkey pull out a piece of the bear and that bear falls to its knees). A man whose has been swallowed by a chicken pushes head out the neck opening and punches and kicks other chickens around him.
► A large spaghetti tornado blows though a town picking up cars and people as it goes (no one is harmed); people run and scream as huge meatballs and slices of garlic bread are thrown from the swirling pasta and globs of noodles splatter on the ground, sometimes on top of people.
► A man dangles from a large machine in the sky, the machine explodes and it is presumed that the man has died in the explosion (we see him singed but OK later).
► A device explodes and flies through the air in a crowded town square: a man is dragged behind the device, a woman is slammed into a TV camera (we see her face squished against the lens), an enormous fish tank is tipped spilling out its water and the fish inside it, people run to avoid the water and a man is trapped under the now empty fish bowl.
► A man grabs a high voltage cable and flashes with electricity (we see his hair stand up and his skeleton appears as in an X-ray). A dam wall breaks and a wall of garbage and leftover food pours into a town. A boy paints shoes on his feet and when he is unable to remove them, he tries to cut them off, pound on them with heavy objects and although his feet do not appear to be harmed, it looks like they should have been.
► An airplane is struck by a huge slice of pizza and the man and the woman inside the plane jump out, land in a tunnel and walk on fried dough that's floating in hot oil. A man falls from the second story of a Jell-O mold house and we hear a splatter (we see that he is fine later). A man and a boy slide down an ice cream coated roof and land in an ice cream filled dumpster.
► A man slams a radish into another man's eye (he's OK). A police officer tackles a man and holds him with his hands behind his back for jaywalking. A woman accidentally kicks a man in the eyes -- we see the whites of his eyes bulge out briefly (he's OK). A police officer yells at and threatens a man. A man throws snowballs at many people, striking them in the head, face and body and knocking several down. A man trips over a stone wall and falls on the ground (he's OK). A monkey rips half of a man's mustache off. A man drops a monkey on the ground (it seems OK).
► A boy is grabbed by a flying rat-bird and taken away (rat-birds are birds with rat tales, beaks and pointed teeth). A rat-bird flies into the screen and we see a splat of red. A rat-bird grabs a fish out of the air and flies away.
► Several scenes show a variety of food types in different sizes falling from the sky: Steaks in increasingly larger sizes fall onto or near plates in a restaurant and we see plates breaking and glasses breaking and one steak lands on a man's head, and pancakes land on houses and cover them completely, followed by pats of butter and syrup. A man pushes an enormous hot dog into his mouth. Cream oozes out of the nose and eyes of a statue.
► We hear about innovations gone awry and we see a few: rat-birds (birds with rat tales, beaks and pointed teeth), a talking monkey, and several explosions that cause power outages.
► A woman has a severe peanut allergy reaction and her arm and face swell. A man gains an enormous amount of weight when he eats non-stop. A device expands when it is making food and then shoots the food out and into the atmosphere and it almost looks like a biological function. A monkey picks up and throws something and we initially think it's chocolate but we then realize that it is feces. We see sardines with small X's on their eyes indicating that they are dead. A man licks nacho cheese off his arm (he is sitting in a pool of melted cheese). A man grinds sardines into chum in a couple of scenes and we see the fish go in the grinder tube and come out as gray goo. We see a "Porta-Dump" in several scenes.
► A man makes fun of a woman's appearance. People grieve when they think a man is dead. We hear that a man's mother died.

LANGUAGE 1 - 1 exclamation that sounds like a scatological term (it is hard to make out), 1 mild obscenity, name-calling (nerd, lame, freak, weird-o, 4-eyes).

SUBSTANCE USE - We see wine in glasses on tables at a restaurant.

MESSAGE - Never give up on a dream. Never hide the real you. 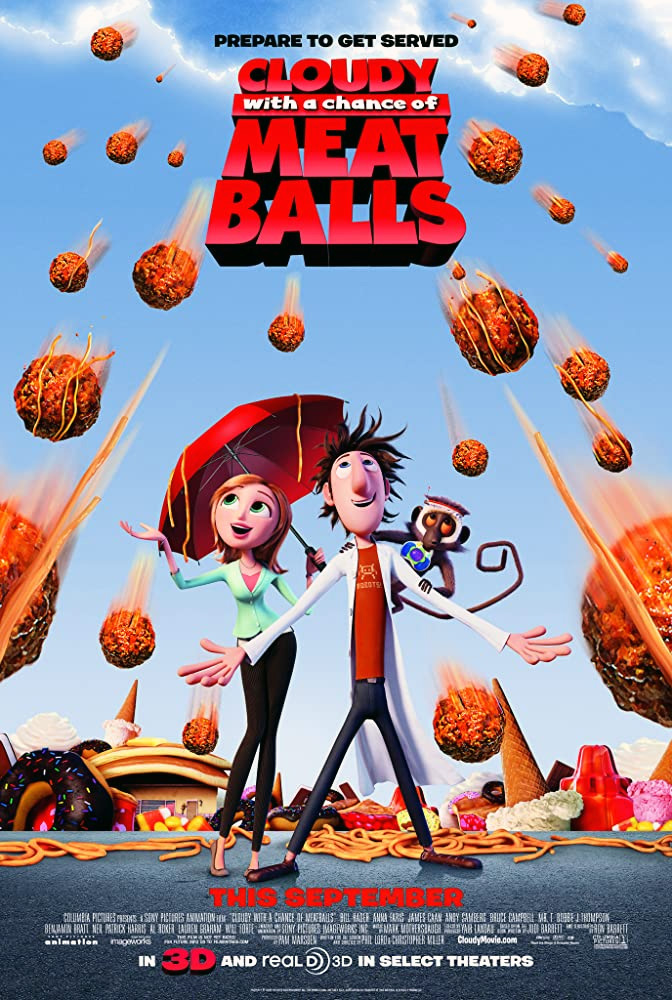