A corrections officer (Andy Garcia), and secretly an aspiring actor, is the head of his family in City Island, a small fishing community in the Bronx. During an eventful week, when he brings home a young ex-con, the entire family is turned upside down, when they finally have to share their secrets with each other. Also with Julianna Margulies and Steven Strait. Directed by Raymond De Felitta. [1:40]

SEX/NUDITY 6 - A teenage boy looks at pornography on the Internet: brief glimpses of nude women in various states of undress are seen, including bare breasts, women in suggestive poses, the side of a nude woman (her breasts are covered by a black bar), and a woman who charges to have people watch her eat.
► People are seen in a strip club, including a young woman walking in and saying that she wishes she had been "able to work," while looking at two women wearing revealing bikini-style outfits and dancing suggestively on stage. Two young women are seen as they walk onto a stage, wearing revealing bikini-style outfits, which show cleavage. A woman dances suggestively in front of a man, swinging over a pole, and her cleavage visible. A woman looks suggestively at a man as she runs her hand over her body. A shirtless man is seen and his bare chest and back are visible throughout the movie. A young woman wears a low-cut, cleavage-revealing shirt.
► A man and a woman kiss in the front seat of a car, the woman straddles the man, they discuss having intercourse, and the man pushes the woman away.
► A man and a woman kiss. A group of men, women, and female and male teenagers hug.
► A man makes derogatory comments about his mother having had intercourse with his young friends and that she was sexually promiscuous. A teenage boy tells a woman that he has a fetish, deriving sexual enjoyment from watching women eat. A teenage boy makes a crude joke about sleeping with prostitutes and thinking about becoming a pimp. A teenage boy and a man discuss the size of a young woman's breasts, causing the young woman to become embarrassed and storm away. A young woman tells a man and a woman that she had breast implants.

VIOLENCE/GORE 4 - A man lunges at another man while holding a knife, threatening him; he throws the knife at the man, missing, kicks the man in the groin, handcuffs him to a stop sign and punches him in the face (he is quickly pulled off by a woman who jumps on his back). A young woman slaps a man in the face.
► A man driving a car slowly runs into a car in front of him: neither driver is injured.
► Men and women shout at one another. A man discusses prison violence and prison gang violence with two women, using crude language; he explains that people get beat up and will not leave prison unharmed. A woman jokingly tells a man that her father had tried to kill her mother, but instead was drunk and had only put a knife through a picture of her mother.
► On a film set an actor is shot and falls to the ground: fake blood pours from the fake bullet wounds on his chest, and the man stands up unharmed.
► Men are seen wearing handcuffs and leg shackles in a prison setting. A man is seen handcuffing a man to a door handle. A man makes a crude joke that another man had his family chained up and a man handcuffs himself to a young woman.
► A man, a young woman and a woman hit and punch a teenage boy in jest, while the teenage boy shouts dramatically.

MESSAGE - The love of a family can overcome almost anything. 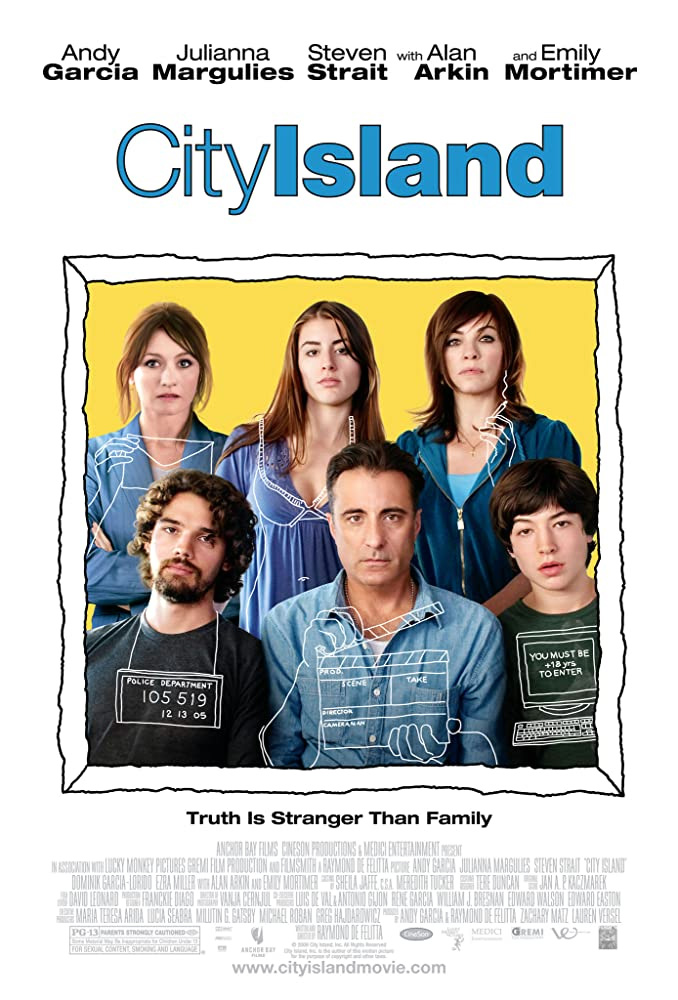