Dakota Fanning stars as a young girl that saves a little pig from being killed and cares for it, and they become friends. The pig also befriends a spider named Charlotte that none of the other barn animals can tolerate, and their friendship causes a chain of events that eventually has an effect on the lives of everyone. Also with Julia Roberts, Oprah Winfrey, Dominic Scott Kay and John Cleese. Directed by Gary Winick. [1:37]

SEX/NUDITY 1 - A boy and a girl look at each other and smile in a few scenes, and then run off holding hands in another scene.

VIOLENCE/GORE 2 - A man picks up a piglet, and then a heavy axe, and walks out of a stall where is confronted by his daughter who protests the fact that he is going to kill the piglet (the man relents).
► A girl punches a boy in the arm. A girl tackles her younger brother who was trying to kill a spider (the boy had trapped the spider in a jar).
► A rat is chased by two crows who squawk and dive toward it: one pokes it with its beak, and the other rolls it in an empty can, but the crows crash into a refrigerator and fall in a pan of wet paint.
► A pig slams its head into a fence plank three times, until the plank falls off and the pig runs out of the yard. A rat with a yo-yo string around its neck is pulled back and onto its back when a sheep steps on the string. A goose slaps another goose on the head with its wing.
► Spiders break out of their egg sack, shoot a strand of webbing into the air and sail away in the wind. A rat pulls a spider egg sack and drops it off a ledge to the hay-covered floor where it is picked up in a pig's mouth.
► A horse faints and lands hard on the ground, and a pig faints and lands hard on the ground.
► A goose egg rolls down a rat tunnel, lands on the rat and breaks open covering the rat with goo that apparently smells really bad (the animals in the bar react to the smell). A rat falls into a tattered stove in a garbage dump.
► Two crows are frightened by a scarecrow in a field. A man drops a cleaver that nearly strikes a rat on the ground.
► A piglet squeals and thrashes while in a school desk and the girl who put it there gets in trouble. Animals call a spider many insulting names (creepy, disgusting, hideous). A pig is told that he will be killed and smoked for Christmas dinner.
► A man pours slop (gooey brown mush) into a trough in several scenes, for a pig to eat, which it does and its face and front hooves are covered with the goo; a rat also wallows in it and eats the slop.
► A cow flatulates in a couple of scenes, at one time blowing in the direction of a rat that is consequently thrown off a fence. A rat burps loudly, and a cow drools.

DISCUSSION TOPICS - Pork, friendship, death of a loved one, kindness, patience, livestock farming, caring for others, beauty, extraordinary occurrences, thinking for yourself, being humble, the life of spiders, nocturnal creatures, childhood phases, miracles.

MESSAGE - Friendship can have an extraordinary impact on people. We are better listeners when we are children. 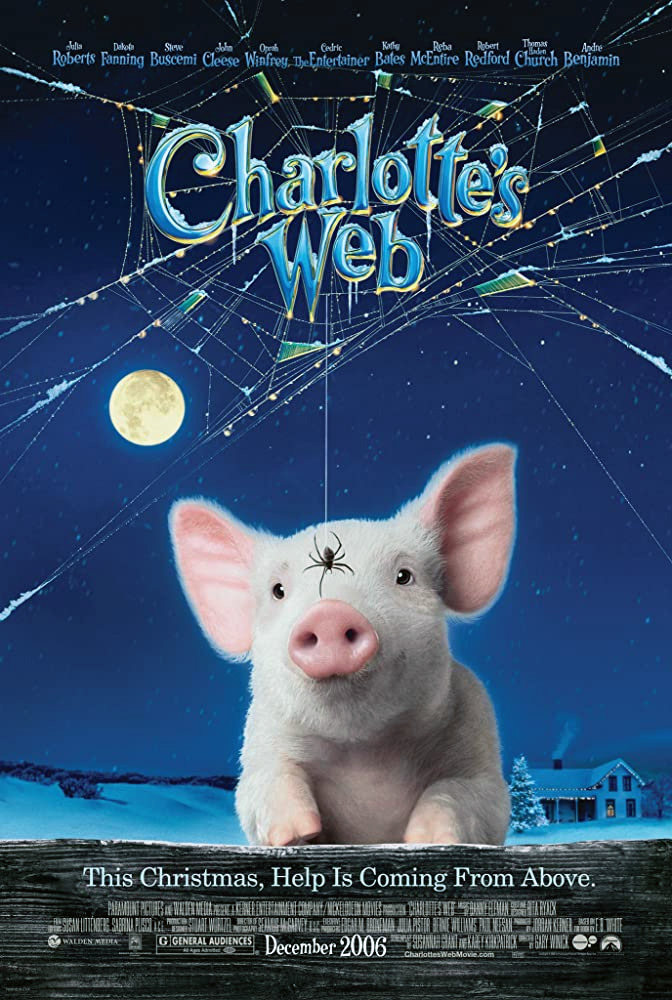