After moments of great stress a young man (Ashton Kutcher) is unable to remember what he was doing. Because his father was institutionalized for a similar problem, he feared for his own fate. But he discovers how to transport himself to the past, and uses the knowledge to change his future. What he doesn't count on is that each time he changes something in his past, everything else changes in the present, and many results are unwelcome. Also with Amy Smart, Eldon Henson, Eric Stoltz and Ethan Suplee. Directed by Eric Bress & J. Mackye Gruber. [1:53]

SEX/NUDITY 8 - A young woman lies on top of a young man in bed, she thrusts rhythmically, we hear thumping, and they kiss. A young man and a young woman are in bed together under covers, she lies on top of him and we see her moving rhythmically briefly; the young man is bare-chested. We see a young woman in a skimpy leather outfit and a young man in bed (it is implied that they have had a sexual encounter), she pulls up her stockings, the young man masturbates under the covers (we see rhythmic movement) and he throws a soiled (with semen) T-shirt at another young man. A man sets up a video camera and tells a boy and a girl to take off their clothes and that they are going to "act like they are in love like grown-ups do" (we see the boy and girl with bare shoulders). Two men unfasten their pants, and a young man gets on his knees in front of them preparing to perform oral sex on them (please see the Violence/Gore category for more details). A young man lies on top of a young woman in bed (it is suggested that they have just had sex), she talks about having had "multiple orgasms" and asks him where he learned those "tricks." A young man wakes up in bed with a young woman (he's bare-chested), he falls out of bed, wraps a towel around his waist, the young woman tells him to hurry back because she wants a "quickie." He proceeds to walk through the halls of a sorority house passing scantily clad young women, he goes into a shower room, we see a fully nude (bare breasts and pubic region) young woman stepping out of the shower and wrapping herself in a towel. A young man and a young woman kiss in several scenes, a boy and a girl kiss, and a girl kisses a boy on the cheek. A man is threatened with sodomy. A young man and a young woman talk about her being a prostitute. A young woman working as a waitress drops dishes on the floor, and when she bends down a man touches her buttocks. We see a poster of a topless young woman (sweater sleeves hang over her nipples). A woman wears a low-cut top that reveals cleavage. A boy looks at a Hustler magazine (we don't see anything but part of the cover which shows the title and a woman's head and shoulders), and a man looks at a Hustler magazine. There are several references to the fact that a young man has had many sexual encounters.

SUBSTANCE USE - People are shown drinking alcohol and smoking tobacco and marijuana.

MESSAGE - Trying to change one's past can change the present for the worse. There are always unintended consequences to any action. 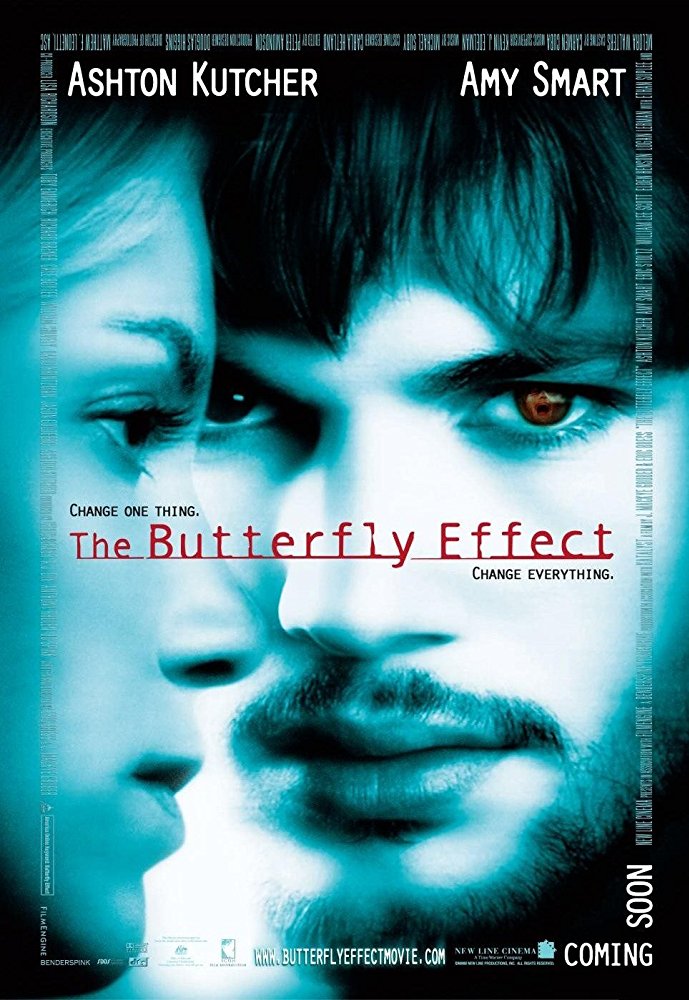